Shahid Kapoor Accidently Photobombs His Wife, Mira Rajput's Selfie While She Works Out

Shahid Kapoor Accidently Photobombs His Wife, Mira Rajput's Selfie While She Works Out

Mira Rajput Kapoor shared a selfie that shows Shahid Kapoor working out in the background. They are holidaying in the Maldives.

The Kapoor family had left for the Maldives for a vacation to spend some quality time together. Shahid Kapoor and Mira Rajput are currently holidaying in the Maldives with their kids and are sharing glimpses of their fun-filled time together.

Mira Rajput Kapoor Reveals The Most Annoying Habit Of Husband, Shahid Kapoor And Who Wins Fights

Mira Rajput Kapoor Finally Reveals How She Had Lost Her Pregnancy Weight, Shares Her Diet Tips A few hours, Mira Rajput Kapoor took to her Instagram stories to share a picture of herself. Mira shared a workout selfie in gym wear at their resort. Atop the picture she wrote, “Back at it.” While she posed for the camera, Shahid can be seen shirtless in the background, in his workout mode. 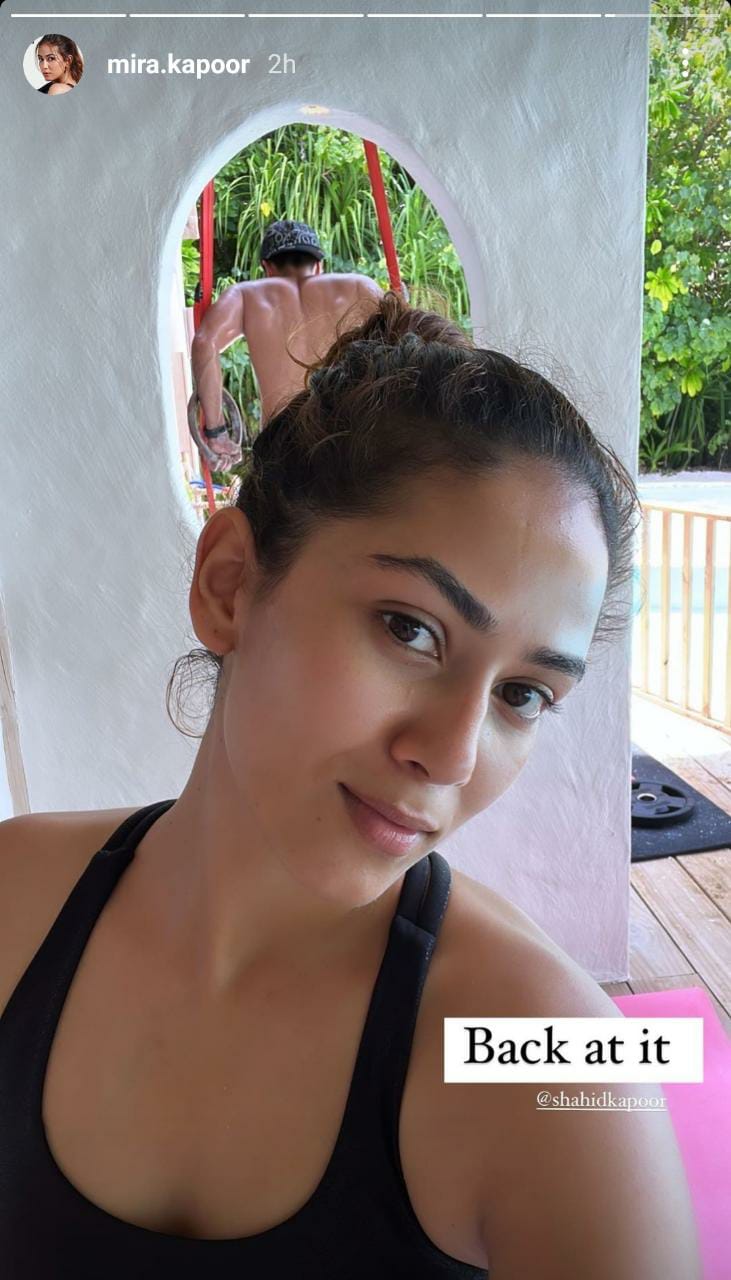 On October 15, 2021, Shahid Kapoor had shared a goofy picture of him on his Instagram stories. The actor had clicked the picture at the same point where Mira, clicked her selfie. Atop the picture, he wrote, “Hang in there.” 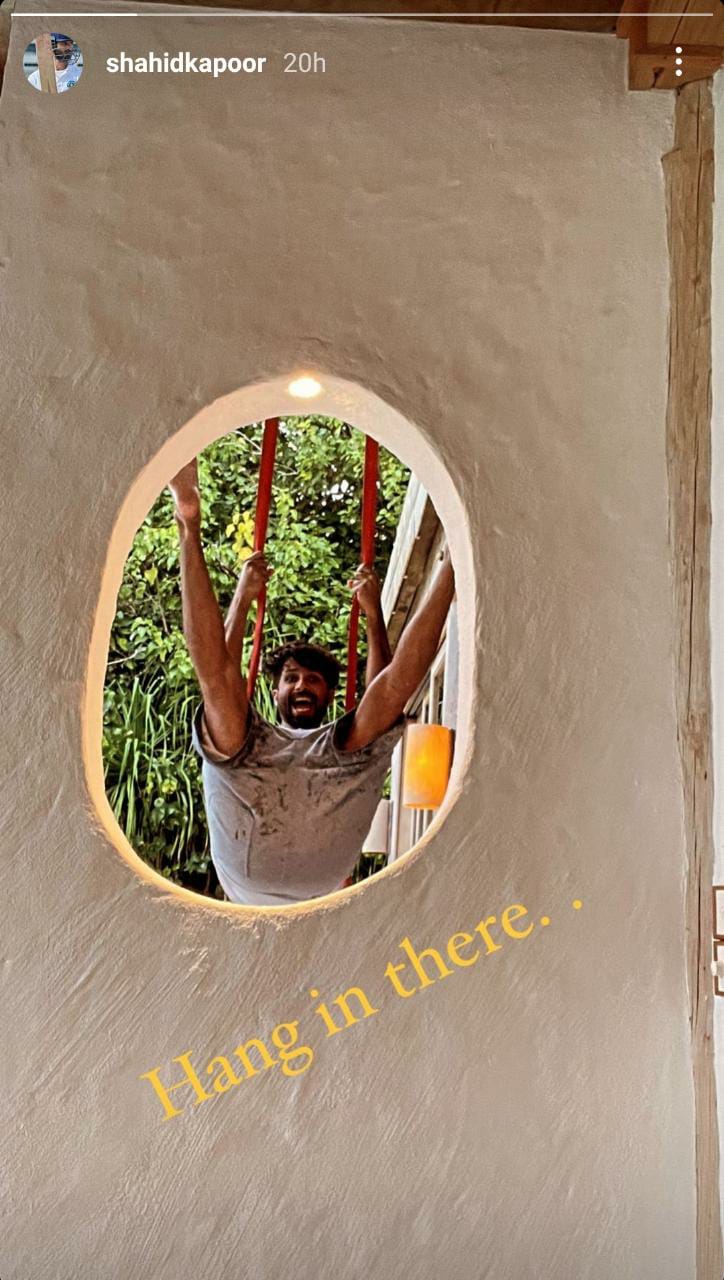 On October 14, 2021, Mira had shared a small video on her IG handle. In the video, we could see beach toys lying abandoned in the pool. Alongside it, she had written, “Where are the kids?” while panning the camera to the faraway beach and surroundings of their resort. However, her kids were nowhere to be seen. She had further written, “It seems they have made new friends and ditched us like this bucket. #thankgodforkidsclubs.” 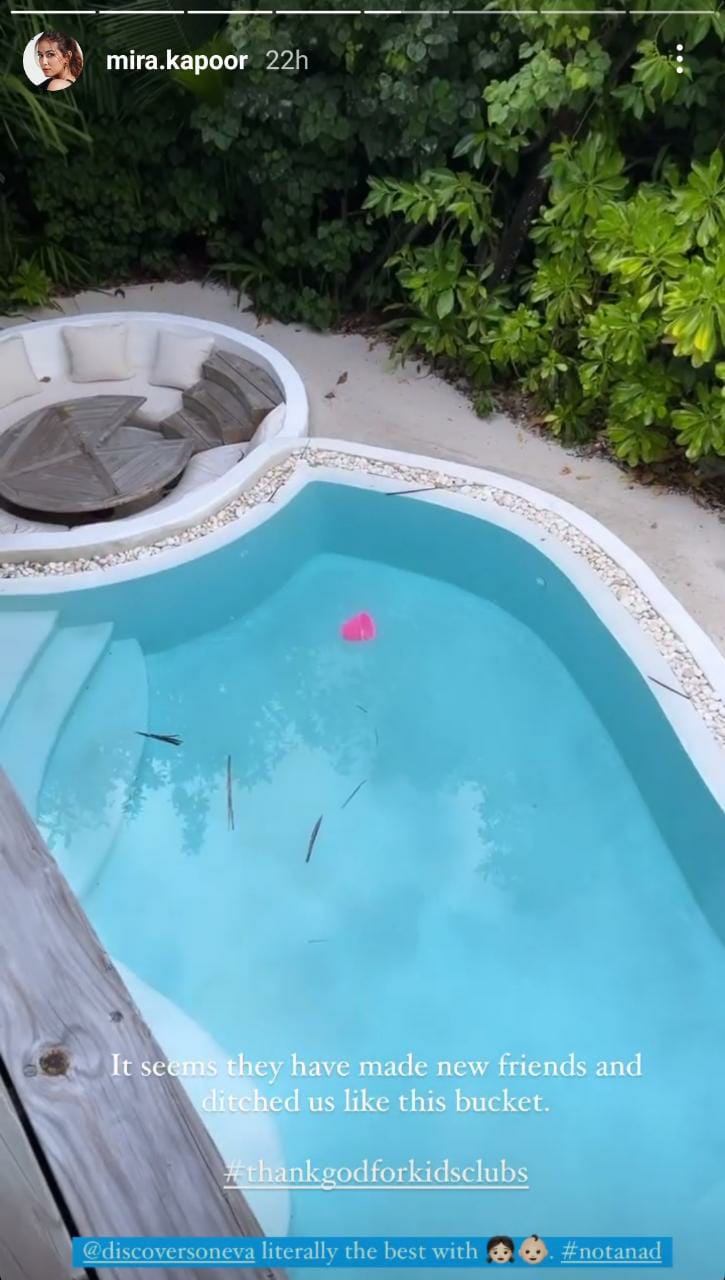 Earlier, Mira Rajput had shared a sun-kissed picture of herself on her Instagram handle. The gorgeousness was seen lying down in the sun wearing a boho-style headband and black sunglasses. She had captioned it as “Kiss me more.” 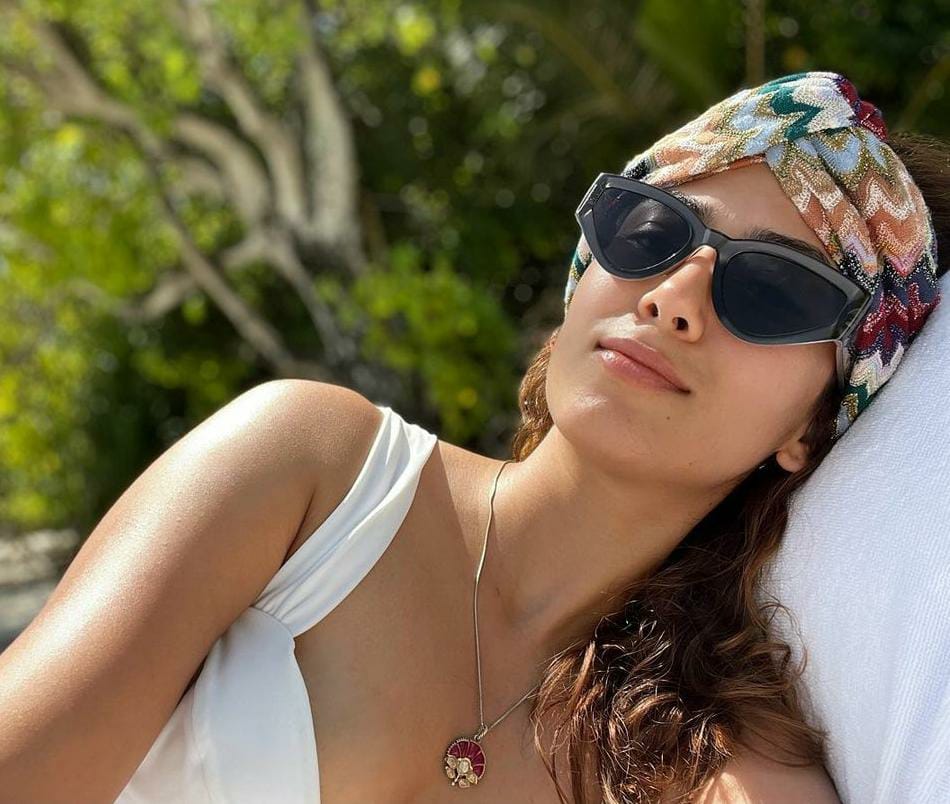 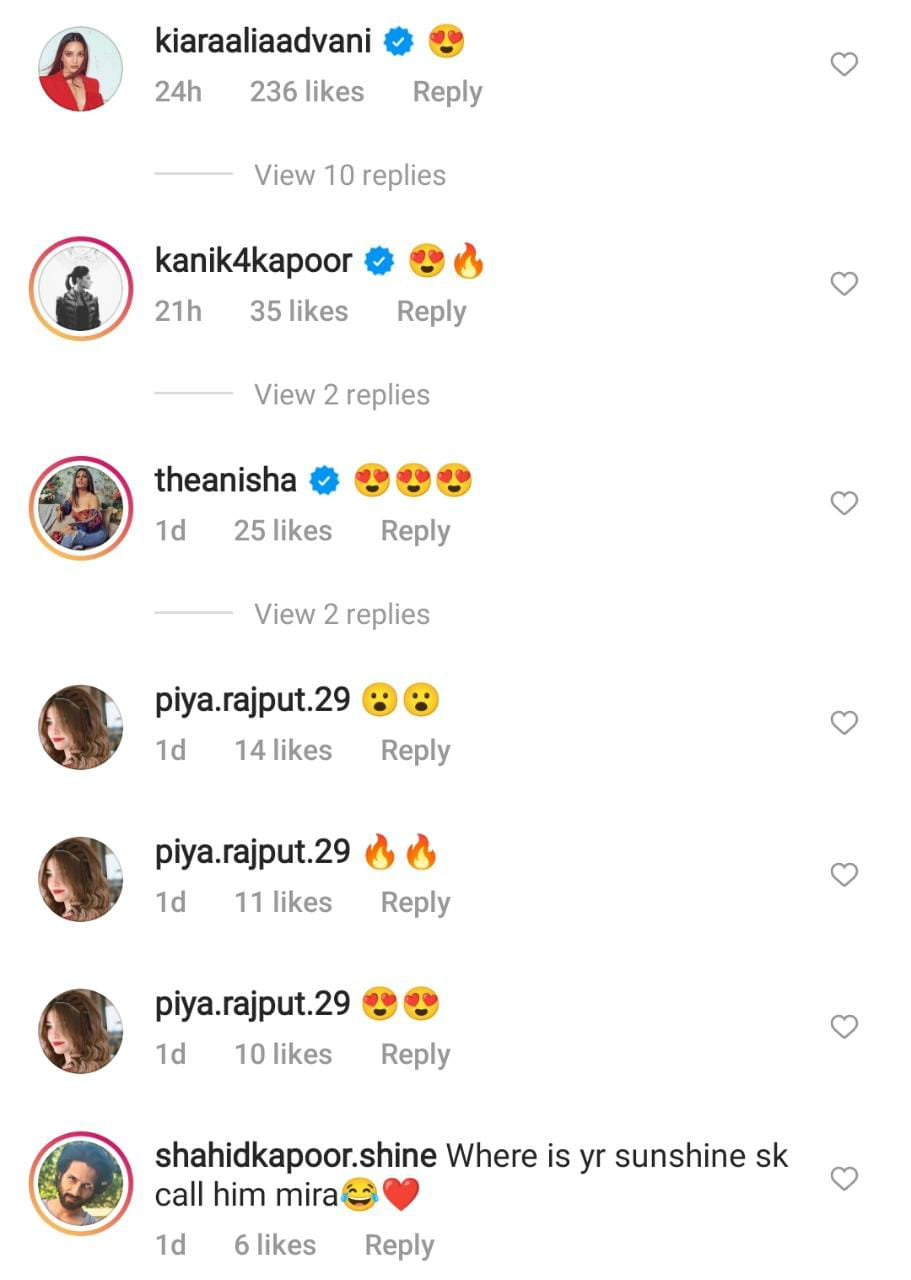 On October 13, 2021, Shahid Kapoor and his family was spotted at the Mumbai airport. As Shahid Kapoor had stepped out of the car holding Misha's hand, he had asked the paparazzi to maintain distance. On the other hand, Mira had got Zain out of the car, and then Shahid had picked him up in his arms. Shahid had donned a black jacket with 'No photography' written on the back to make it clear to the paparazzi that he doesn’t wish his family to be photographed. 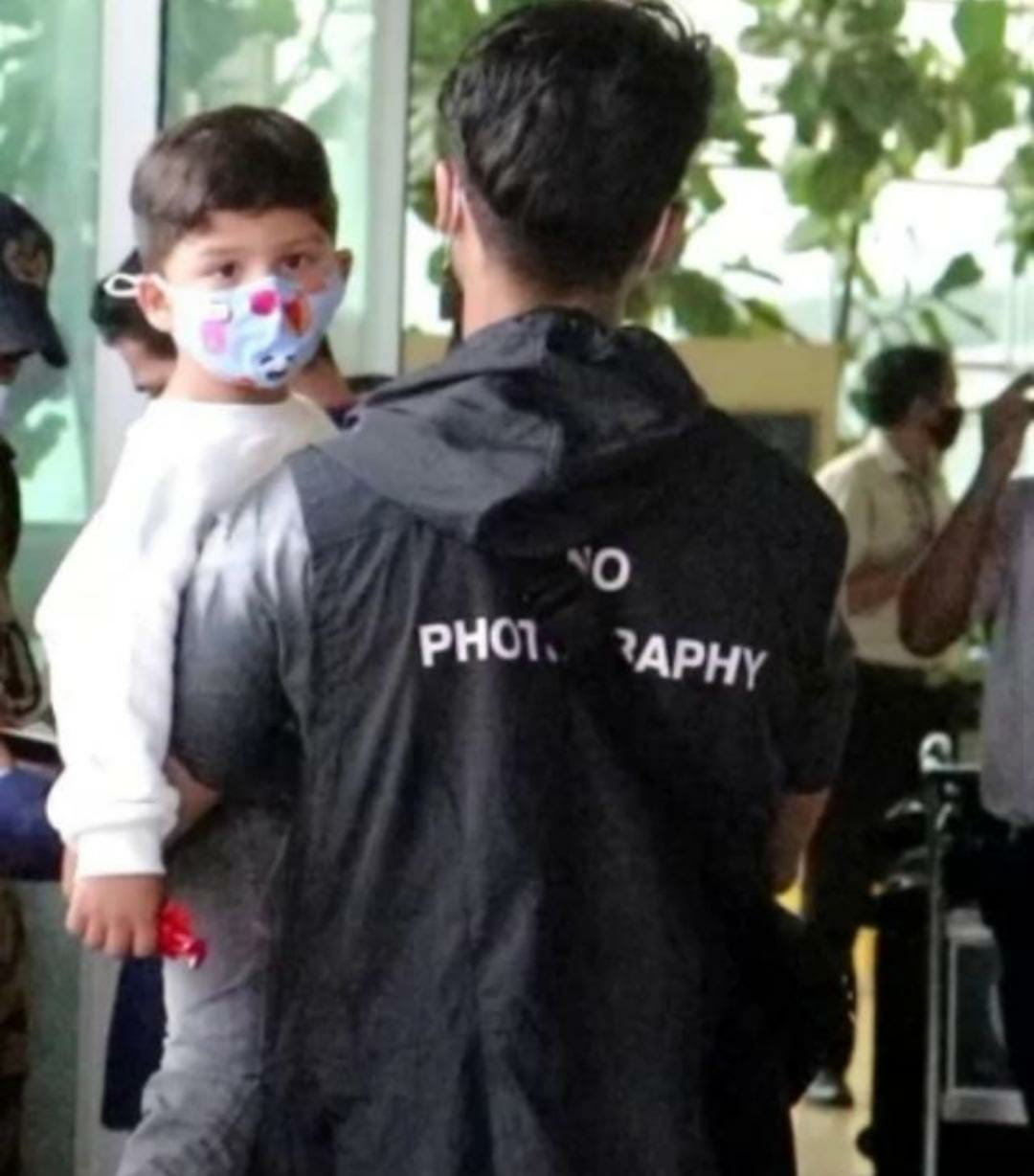 It is surely fun to see the Kapoor family have a great time in the Maldives.