He is a lord of many talents and she is a lady with a very strong and distinct sense of style. And together, they made a powerful couple of Bollywood. Fiercely private about their personal life, Farhan Akhtar and Adhuna Bhabani always kept much of their memories to themselves.

But, as we just got to hear the sad news of this lovely couple heading towards the splitsville, we thought of taking a look back at the unknown adorable things that Farhan Akhtar and Adhuna Bhabani once shared.

Shibani Dandekar Thinks Her Boyfriend, Farhan Akhtar Is The Best-Dressed Celebrity In B-town

Farhan Akhtar Shares A Pic Of Ringed-Hands With GF Shibani Dandekar, Fans Wonder If They Are Engaged

Farhan Akhtar Turns 'Shayar' For Girlfriend, Shibani Dandekar, This Is How She Reacted

Farhan Akhtar Finally Confirms His Love For GF Shibani Dandekar, She Joins Him For His Birthday Bash 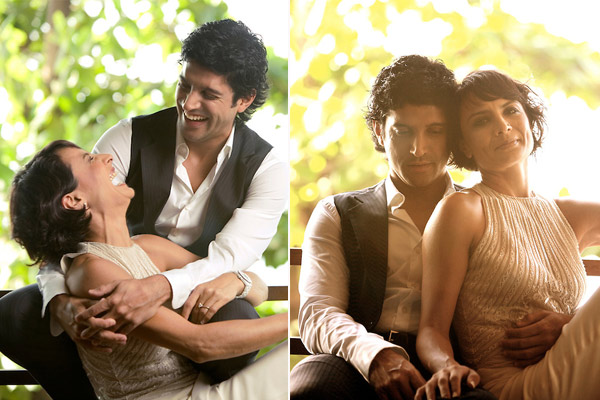 On one fortunate day, a young man, went to the J49 night club in Juhu, Mumbai with his group of friends, and there he saw a girl who was unlike others. Her bright red hair caught his attention, and once she started doing handstands and full cartwheels, he decided then and there that she is the one. Through a common friend they got introduced to each other and from there the man did everything he could to win over his lady-love. While they were dating he would often act drunk so she could drive him home. Sounds like a story from the Mills and Boon romance, doesn’t it? But no, this is not a Mills and Boon story, this is a real life love story of how fate brought Farhan and Adhuna together.

As different as chalk & cheese 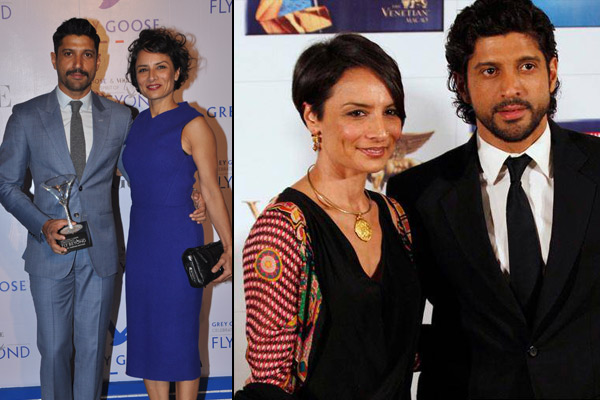 Born to a Bengali father and a British mother, Adhuna had been brought up in a much different environment than Farhan. At the time when Farhan was busy playing pranks and being a naughty boy, she was sure of what she wanted to be. And, not just because she was six years elder to him but because she loved hairdressing from a very young age. And here, even when Farhan had gone past his teenage, he was unsure of what he wanted to do with his life. But, when fate plans for two souls to be together, nothing can come in between. 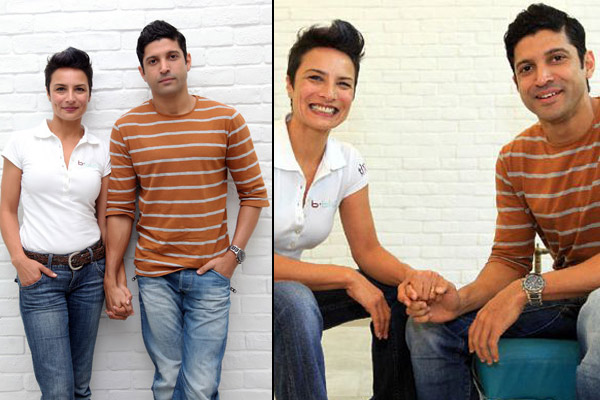 Their centre for peace and love was their beautiful sea facing home at Bandstand, which they named 'Vipassana' because their Vaastu expert suggested them to keep a name that starts with L or V and Louis Vuitton was already taken! Interestingly, this was the same house that Adhuna used to adore while going for a walk to Bandstand with her kids.

Recommended Read: 5 Must-Have Innovative Beauty Products That You Must Own In 2016

Giving each other personal space 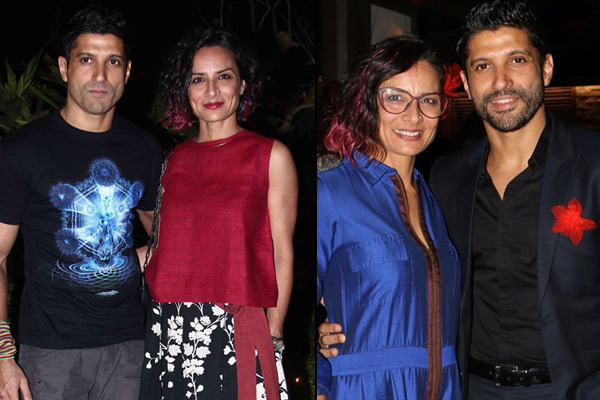 We have time and again said that it is very important to give each other enough personal space for a healthy and successful relationship. Farhan and Adhuna did exactly that when they were together. When free, they not only loved to spend quality time with their two lovely daughters, but also pursued activities that makes them happy as an individual. For example, in her free time Adhuna likes to paint and go for horse riding, while Farhan writes and composes songs. And, they both just did all this in their free time. We truly agree with what Farhan had to say on making marriage successful.

“I’m convinced that the key to a happy relationship is not just the belief that the other person is always there for you but respecting your spouse’s personal space. I feel there has to be a nice balance between displaying your love and affection to your loved one and giving them the space they need.” Farhan and Adhuna had always been quite unlike other star couples. Though distinct from each other in many ways, they were like two different pieces of the same puzzle. So, here are some adorable things about the couple that unfortunately is now a matter of the past:

#1. The common friend that introduced them to each other is supposedly Zoya Akhtar, Farhan’s sister, who was already friends with Adhuna.

#2. Adhuna always mentioned in her interviews that Farhan always kept his room neat and tidy. He was never such a husband who kept leaving wet towels on bed or messing up his items.

#3. For those who believe in lucky charms, Adhuna Akhtar was definitely one for Farhan. When he met her, he was only writing the script of Dil Chahta Hai, but once she came into his life and Dil Chahta Hai materialised into a film, their respective careers took off. Perhaps, this is what love is all about- bringing out the best in each other. 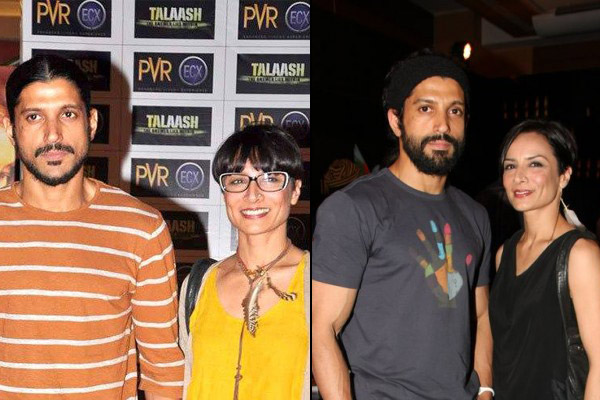 #4. Both husband-wife duo love thrill-seeking sports like sky diving or deep sea diving. But, did you know that Farhan is scared of cockroaches!

#5. Farhan and his friends would come almost every week at Adhuna’s salon to get a haircut or change the hair colour, not because they needed to change their hairstyle so often but because their friend, Farhan was in love with the lady there. Isn’t that adorable?

#6. In a TV show Adhuna mentioned that Farhan is passionate about food and even cooks very well. Now is there anything he cannot do? 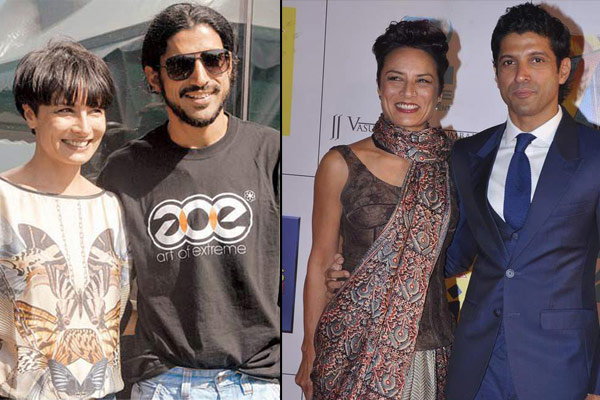 #7. Although we don’t get to hear Farhan sing that often, he used to sing often for his wife Adhuna, and she loved listening to them.

#8. Have you ever shared your wardrobe essentials with your other half? Whether you have or not, we love the fact that Farhan and Adhuna, even after years of marriage, used to borrow items from each other’s wardrobe. Farhan used to love her sunglasses, and she was a fan of his hats.

#9. They are very different in their tastes- Farhan loves chocolates while Adhuna loves a hot cup of coffee. 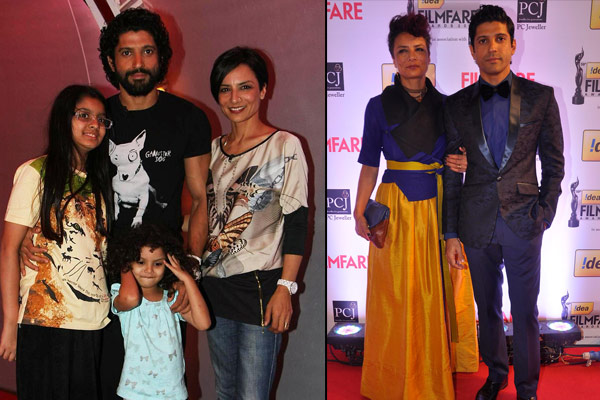 #10. When asked about who he thinks is the most stylish woman other than his wife, he spoke of his two daughters, Shakya and Akira and again went back to praising his wife’s fashion sense. So sweet.

#11. Although they rarely splurge on themselves, there was one time when Adhuna had a car accident that left scars on her face, and she needed to apply a cream from La Mer, a high-end brand. So, whenever Farhan would find a bottle of it while travelling abroad, he would immediately pick one for her.

#12. For her 40th birthday, Farhan surprised Adhuna with a diamond ring because when they got married they did not have the money for it, and she considers this as the most thoughtful gift from him. #13. Once in an interview, Farhan said that he would love to own a guitar from Gibson. So, along with his daughters Shakya and Akira, Adhuna gifted it to him on his birthday.

While their love story was truly an inspiration for all the couples put there, it is really sad to see them parting ways now. And, we still hope that they get back together and continue inspiring us.

Shibani Dandekar Thinks Her Boyfriend, Farhan Akhtar Is The Best-Dressed Celebrity In B-town

Farhan Akhtar Shares A Pic Of Ringed-Hands With GF Shibani Dandekar, Fans Wonder If They Are Engaged

Farhan Akhtar Turns 'Shayar' For Girlfriend, Shibani Dandekar, This Is How She Reacted