Alia Bhatt recently confessed her love for Ranbir Kapoor on the stage during the Filmfare awards. Official Colors TV Twitter page has tweeted about the same and what Alia Bhatt had said.

Have you ever thought after looking at the beautiful pictures of Alia Bhatt and Ranbir Kapoor that they should marry soon? And it’s not just their stunning looks but also their superb work on-screen. While Alia Bhatt has mesmerised us with her acting in films like Highway, Raazi, Gully Boy, among others, her beau, Ranbir Kapoor has managed to outshine his contemporaries with his roles in Rocket Singh, Rockstar, Tamasha, Sanju, and many others. And hence, we can safely say that Ralia (as fans affectionately call them) are rank number 1 when it comes to the Tinseltown couples who are a perfect combination of beauty and brains! (Don't Miss: Sharad Malhotra Says His Marriage Phobia Is Over, 2 Days After Getting Married To Ripci Bhatia)

Ranbir Kapoor’s dear friend, Ayan Mukerji played Cupid between the two when he signed his upcoming romantic fantasy film, Brahmastra with Ranbir and Alia. And ever since the shooting began in Bulgaria for the same, last year, Ranbir and Alia have been ruling the headlines of Page 3s like how! Reports are rife that Ranbir Kapoor and Alia Bhatt are soon going to tie the knot, however, no official confirmation on the same has hitherto arrived.

Ranbir Kapoor And Alia Bhatt Dance Together On 'Ishq Wala Love', He Goes Down On His Knees

Alia Bhatt Reveals What She Would Name Her Daughter In Future, And It's A Unique Name

Alia Bhatt's Most Memorable Day In 2019 With BF, Ranbir Kapoor In It Reflects How Much She Loves Him Ranbir Kapoor and Alia Bhatt’s social media PDAs are known for being an epitome of love, and whenever their couple pictures surface online, we can’t help but keep looking at them for long. Something similar happened at the recently concluded Filmfare awards when Alia Bhatt confessed of her love for Ranbir Kapoor on the stage. We watched that video in loop, right? In case you missed it, here it is:

And now, the official Twitter page of Colors TV has tweeted about the above video and what Alia Bhatt had said from the stage for Ranbir Kapoor. Colors TV has tweeted, “Thank you for making my heart shine and my eyes smile.” @aliaa08 expresses love and gratitude for her special one #RanbirKapoor on the stage of #FilmfareAwards2019 #Filmfare2019. We totally adore them.” Take a look at the tweet:

And here's the full-video:

Filmfare awards were definitely one of its first kind when we saw Alia and Ranbir doting on each other publicly. And in fact, it was also because of their mothers who congratulated this awesome couple on social media for their wins in Best Acting category for the movies- Raazi and Sanju. While Ranbir's mother, Neetu Kapoor had written, “AND moments like these make you forget all the stress congratulations so proud n happy #filmfareawards #bestactor #bestactress”, Alia’s mother, Soni Razdan had captioned Ralia’s picture as, “Congratulations you two ... happiness and proudness #filmfareawards #congratulations #andcelebrations.” (You May Like: Ekta Kapoor's Son Ravie Kapoor Attends First Birthday Party With Tusshar And Lakshya, Picture Inside) 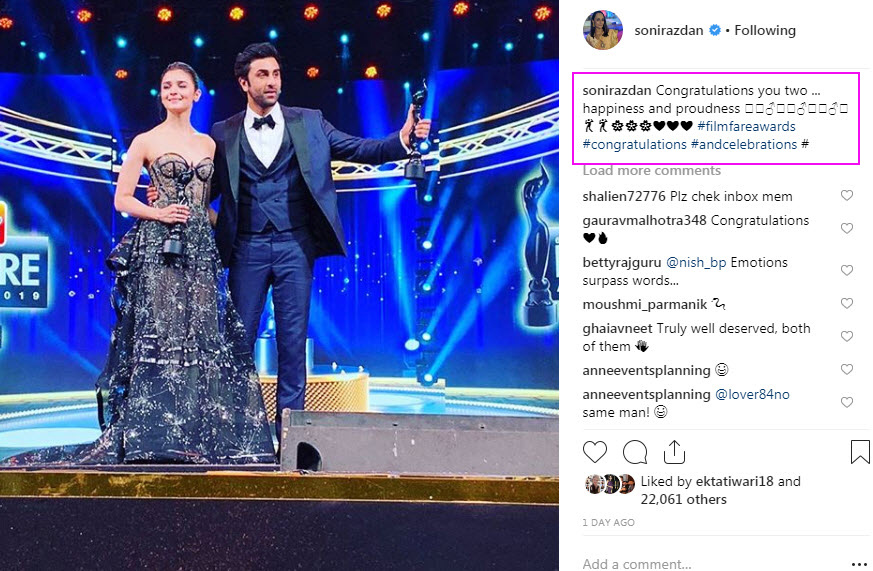 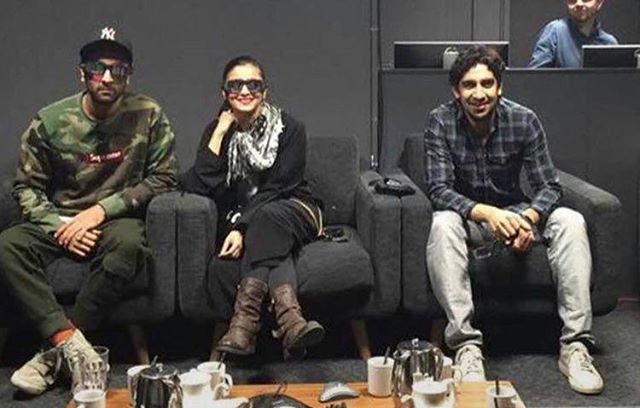 And it's not only Alia Bhatt, who has remained vocal about her love for Ranbir Kapoor. In fact, last year when reports on their relationship started flooding our social media walls, Ranbir Kapoor had confirmed his relationship with Alia Bhatt. In an interview with the GQ magazine, the 36-year-old actor had stated, “It’s really new right now, and I don’t want to overspeak. It needs time to breathe and it needs space. As an actor, as a person, Alia is – what’s the right word? – flowing right now. When I see her work, when I see her act, even in life, what she gives is something that I’m aspiring to for myself. It’s new for us, so let it cook a bit.” 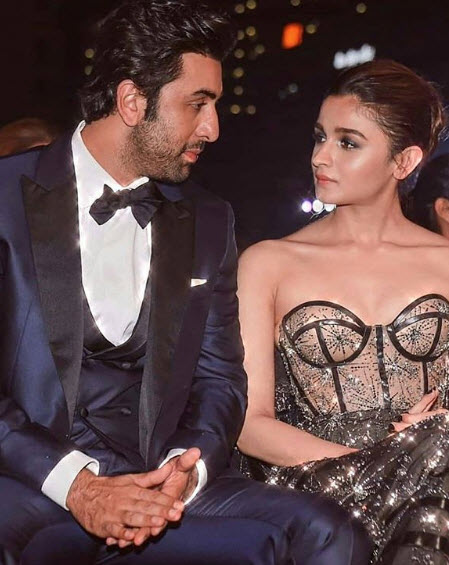 When asked what the best thing is about being newly in love, Ranbir Kapoor had shared, “It always comes with a lot of excitement. It’s a new person, it comes with new beats. Old tricks become new tricks again – you know, being charming and romantic, all of that. I think I’m more balanced today. I value relationships more. I can appreciate hurt and what it does to a person much more than I could a couple of years back.” (Suggested Read: Deepika Padukone And Ranveer Singh Attend A Friend's Wedding Together And Are A Sight To Behold) Both are supremely talented and have achieved superstardom at a young age. When it comes to acting on celluloid, there is no one like them, and almost all the celebrities who recently appeared on Koffee with Karan season 6, admitted the same. Some of them wanted a career graph like

Ranbir Kapoor And Alia Bhatt Dance Together On 'Ishq Wala Love', He Goes Down On His Knees

Alia Bhatt Reveals What She Would Name Her Daughter In Future, And It's A Unique Name