Aly Goni Constructs A Lavish Abode, GF, Jasmin Bhasin's Lovely Reaction To It Will Leave You In Awe

Aly Goni purchases a lavish apartment, and his girlfriend, Jasmin Bhasin's reaction to it is every girlfriend ever. Check out!

Owning a dream house is one of the biggest dreams of every human being. While some fantasise about creating a small cosy place to derive comfort, others spend on a luxurious bungalow. One such celebrity who is on cloud nine at the moment to construct his dream house in his 30s is Aly Goni. And it’s his girlfriend, Jasmin Bhasin’s reaction, which is too adorable to miss.

Speaking about their love story, Aly and Jasmin were good friends even before entering the controversial show, Bigg Boss 14. However, during their stay in the house, we witnessed a cute bond between the two, which was more than friendship. Eventually, they confessed their love on national television, and after the show ended, Jasmin jetted off to Kashmir to meet Aly’s parents.

Aly Goni Is Willing To Go To Any Length To Convince Girlfriend, Jasmin Bhasin's Parents For Marriage

Jasmin Bhasin Shares A Video With Aly Goni, Indulged In A Mushy Moment From Their London Diaries

Jasmin Bhasin Pens A Heartfelt Note For Her Beau, Aly Goni On His Birthday, Calls Him Her 'Miracle' On October 3, 2022, Aly Goni took to his IG stories and shared beautiful glimpses of his luxurious dream house. In the pictures, Aly was seen posing in front of his abode, donning a black T-shirt and green pants. The smile on his face spoke volumes about his achievement. After a while, his doting girlfriend, Jasmin Bhasin, took to her IG stories and reposted Aly’s picture. Atop it, she wrote, “Proud of you my rockstar.” Jasmin’s cute reaction won many hearts in split seconds. Jasmin's proud moment is every girlfriend ever.

Also Read: Kareena Kapoor Gets Mobbed At The Airport, Fans Hail Actress For Keeping Calm, Say 'Hats Off To Her' 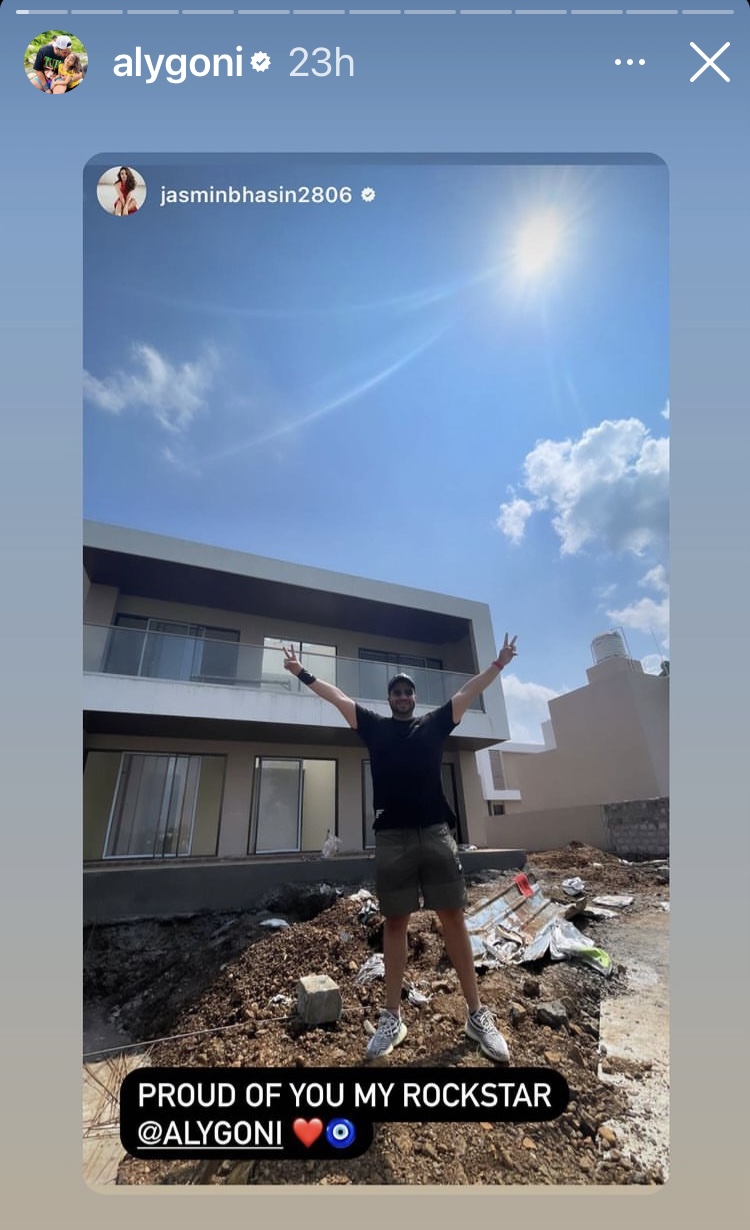 Earlier, in an interview with ETimes, Jasmin Bhasin had opened up about her relationship with her boyfriend, Aly Goni and answered some much-asked questions about their bond. Unlike other celebrities, Jasmin and Aly don't believe in keeping their love life under the wraps. Reflecting on whether being in a relationship with Aly has hampered her career or not, Jasmin had said: Congratulations to Aly Goni for his new luxurious abode!

Next Read: Saif Ali Khan Gets Trolled For Looking Like Invader 'Taimur' And Not 'Raavan' In 'Adipurush'

Aly Goni Is Willing To Go To Any Length To Convince Girlfriend, Jasmin Bhasin's Parents For Marriage