Angad Bedi and Nora Fatehi were 'a thing' a few years back and would often be spotted in various parties and vacays together. After Nora, Angad finally confirmed his past relationship with her.

When you start dating somebody, you end up foreseeing your entire life about both of you. Everything seems so perfect that you dream to spend your lives together and grow old with one another. You two may not admit, but somewhere, you already start thinking about baby names! But there are times when in spite of things going just as perfect, your relationship may not work out. What do you do then? Well, going into hibernation and taking your own sweet time to heal is okay, but it is also advisable to look around and see the beautiful world. You never know, somebody better might be waiting for you! In case you still have a doubt in the same, take a look at ex-couple, Angad Bedi and Nora Fatehi’s life. (Do Read: Jay Bhanushali And Mahhi Vij Announce The Name Of Their One-Month-Old Baby Girl In A Unique Way)

Angad Bedi and Nora Fatehi were ‘a thing’ a few years back and would often be spotted in various parties and vacays together. Angad was trying hard to prove his mettle in the industry and Nora too, was looking for her first big break. The duo was rumoured to be dating one another but had never admitted. And then came the year 2018, when things took a strange turn for this duo’s life. With Angad and Nora breaking up, the former got married to one of the most popular faces of the Tinseltown, Neha Dhupia and was blessed with an adorable daughter (Mehr Dhupia Bedi) by the end of the year, and Nora, became the ‘next big thing in the making’, in Bollywood.

Nora Fatehi Came Face-To-Face With Ex, Angad Bedi's Wife, Neha Dhupia, This Is What Happened Next 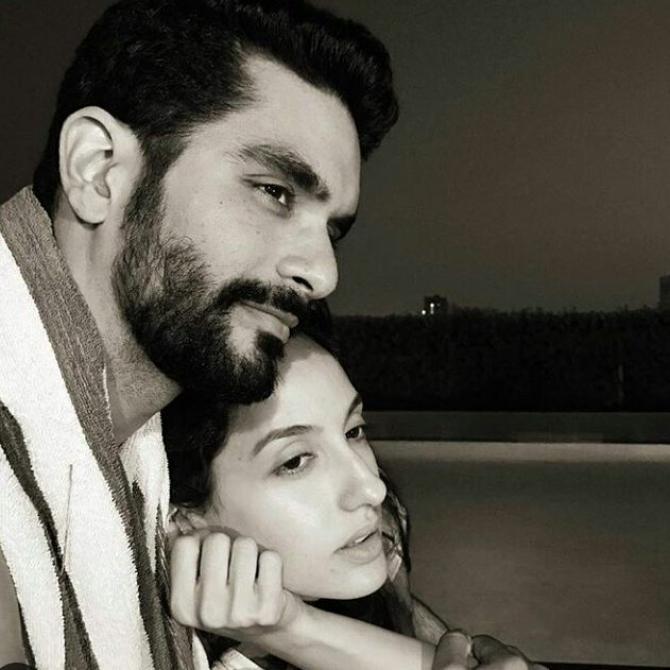 We were used to Nora Fatehi’s angry replies whenever asked about her ex-beau, Angad Bedi. But all thanks to a latest interview of Angad with the ET, wherein, he not only confirmed his past relationship with Nora but also had a wish for her. He shared, “I like to believe that there is dignity in everything. There are some relationships which work and there are some which don’t work. Ideally, you want every relationship to work, if it happens it’s great, if it doesn’t it is unfortunate. I feel as far as my past relationship was concerned, she (Nora) is a lovely girl and she’s doing exceptionally well for herself. She’s a star in the making and all her body of work is being accepted by the audience and she’s on her way up! And, I feel that is what is important and I wish her all the best and all the love and luck.” 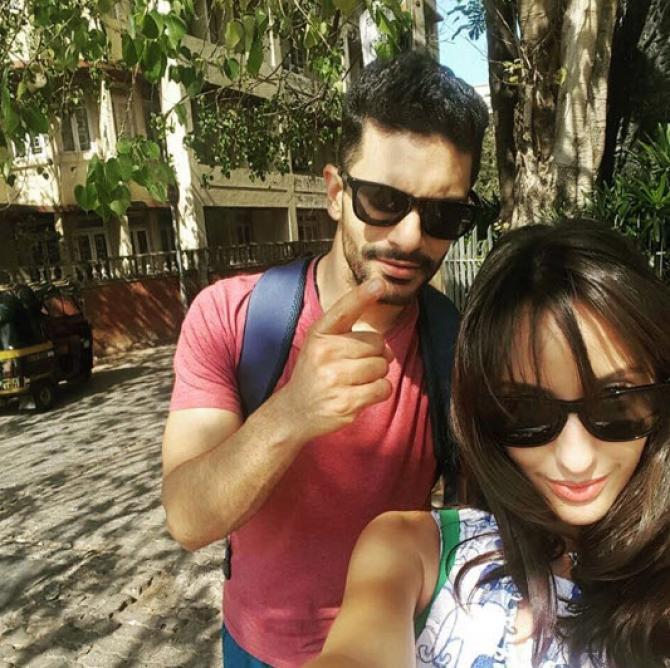 Angad Bedi then went on to say, “I feel the partner that she deserves, will come her way very soon. I feel everything has timing. It’s like the universe wanted to change something within me and it happened, the universe wanted some change within her and give her stardom and it happened. Right now, it’s time for her stardom, after stardom, there will be time for family. I feel you can’t challenge it, you know, you have to accept it. I feel that was the case and I felt that as an artist you have to just respect. I also feel that there’s dignity in silence and there’s a lot of respect. Everybody goes through hardships but hardships make you the person you are, and I feel that is important.” (Also Read: Nehha Pendse Opens Up About Trolls Targeting Her Boyfriend, Shardul Singh Bayas For His Looks) 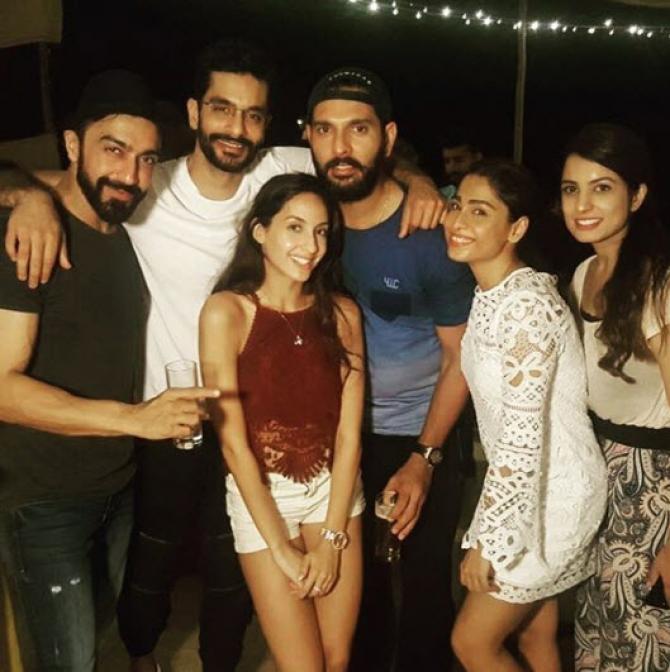 But what looks like it, Nora Fatehi still isn’t conformable sharing the same space as her ex-boyfriend, Angad Bedi. Why do we say so? Nora was recently spotted at a cleaning drive in Mumbai’s Mahim beach. Pragya Yadav (wife of Kedarnath director, Abhishek Kapoor), who works as a social worker had initiated the move and had invited an array of celebrities to take this movement forward. As per SpotboyE report, Nora was doing her share of social good for a few hours but a sudden turn of events led to her disappearance! After spending a good amount of time, Nora had suddenly left without informing Pragya as she had spotted her rumoured ex-flame, Angad Bedi had arrived with his wife, Neha Dhupia! Nora Fatehi once had also spoken about a probable breakup in her life sometime back and had shared in an interview, “All girls go through at least once in their life! For me, it was a little bit difficult because it was an unexpected experience and I was broken by it. I lost my drive for 2 months! However, I must say that experience really just transformed me. In between, I had lost hope for a bit in terms of perusing my career but when that breakup happened I got that fire again and I was like let’s go! I am passionate again, I want to work, I want to make my mark, I want to prove everybody wrong and I can’t regret that breakup because if it wasn’t for that breakup, my fire wouldn't have come back and I needed that fire to kind of just explore.” 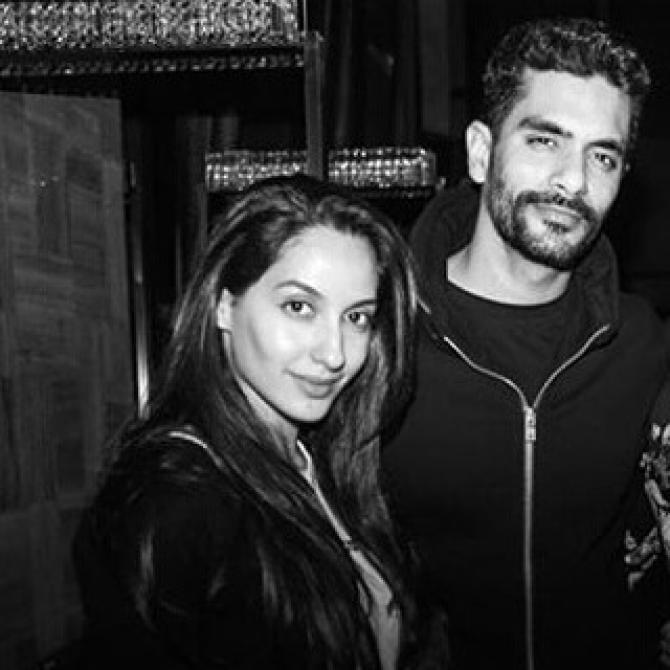 In an interview (taken at the time when Angad Bedi and Neha Dhupia were not married yet), speaking of how she had felt about Angad and Neha’s growing closeness, Nora Fatehi had shared, “Honestly, I don’t care about Angad’s closeness to Neha. It really doesn’t concern me and I’ve got better things to worry about”. And had further continued to say, “I don’t care about who is close to whom and who chills with whom when it suits them. I don’t have time for all that. Everything is just fine. And I understand it’s normal for people to be interested in what’s happening in our [actors] personal lives; it’s a part of the package.” When asked that there is no smoke without fire, Nora had stated, “I’m not the one creating the smoke and the fire, let’s put it this way. I’ve got my head down working hard while others are chasing other frivolous things.” (Must Read: Virat Kohli Flaunting The Initials Of Wife Anushka Sharma's Name On His T-shirt Is Beyond Romantic) Like Angad, we too hope that Nora finds ‘her one’ soon!

Nora Fatehi Came Face-To-Face With Ex, Angad Bedi's Wife, Neha Dhupia, This Is What Happened Next