Popular television actress, Anita Hassanandani shared her breastfeeding experience and revealed that she couldn't lactate for days after C-section delivery. Check it out!

Breastfeeding is a wonderful feeling, and it tremendously helps a mother to bond with her baby. While every expecting mother looks forward to this beautiful phase in her life, sometimes she is unable to breastfeed her baby. Especially in the case of a C-section delivery, a new mom doesn't lactate immediately, and she fails to feed her baby with her own milk. Popular television actress, Anita Hassanandani also went through something similar.

Anita Hassanandani and Rohit Reddy had introduced their son, Aaravv Reddy on February 21, 2021, with a cute video. In the video montage, a large bomb was painted on Anita’s baby bump and when it had exploded, their then-newborn son, Aaravv Reddy could be seen peacefully sleeping in his mother’s arms. While Anita had captioned her post as “And our baby AARAVV has arrived 9/02/2021”, Rohit had written:

Anita Hassanandani Misses Her Son, Aaravv As She Resumes Shoot, Calls Him With An Adorable Name

Anita Hassanandani is a doting mommy to her 18-months-old baby, Aaravv Reddy, and she is living her mommy life to the fullest. However, her initial days were very difficult as she was not able to breastfeed her baby boy. In one of her social media posts, Anita bared her heart out and revealed that she wanted to feed Aaravv as long as he needed. She added that her hubby, Rohit completely supported the idea and made her breastfeeding journey easy. She said:

"During my pregnancy, I had decided that I will breastfeed my child as long as he needs it. While it was my decision, Rohit was completely on board with the idea and he extended his full support by doing a bunch of things that makes my breastfeeding journey easy. He has been my partner for life in this journey and I can say for sure that I am so lucky to have him by my side round-the-clock."

In another post on her IG handle, Anita shared how breastfeeding helped her build an intimate bond with her son, Aaravv. She recalled how she couldn't lactate for a week after her C-section delivery and she faced a lot of difficulties. She further added that people used to ask her so many hurtful questions and she would burst out crying. Reflecting on the same, she said:

"Breastfeeding really helped me make a very very intimate bond with Aaravv, and honesty mujhe lagta tha ki automatically sab kuchh ho jata hai, but aisa nahi hai. Everybody's journey is different. So, mera C-section hua tha and when C-section happens, a mother doesn’t lactate immediately. So, those first seven days until I lactated were very very tough initially. Shuru shuru mein, you know, people would walk in and everybody would just ask 'Aya kya? Are you lactating? And whenever people would leave the room, I would just burst into tears because as a new mom, you want to do your best but you just don’t understand how."

The actress further revealed how her hubby, Rohit Reddy has always been a constant support and helped her overcome the grief. She also mentioned that the moment she stopped worrying about the things, she became happy, and it gave her a lot of strength. Anita concluded:

"Thankfully, Rohit was very very supportive. So he came up to me and he said 'Dude, don’t worry. If you are not lactating, we can give powdered milk.' So, that kind of changed my entire state of mind at that point, and it gave me so much strength. The minute I took the stress away, the negativity away, the people asking me 'Kya hua, kya nahi hua', every thing just fell into place beautifully. Koi na koi apko advise denge, apko tips denge and apko judge karenge. So, might as well just do what makes you and your baby happy because I truly feel happy mom equals to a happy child." For the unversed, Anita Hassanandani had tied the knot with her longtime boyfriend, Rohit Reddy on October 14, 2013. 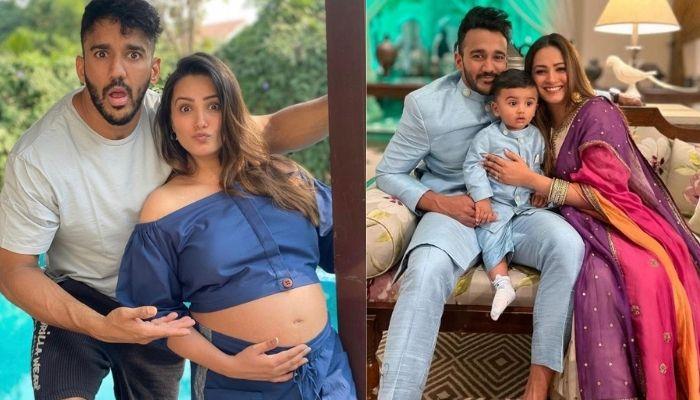 Anita Hassanandani and Rohit Reddy had embraced parenthood on February 9, 2021, when she had given birth to a baby boy, whom they have named Aaravv Reddy. It is said that motherhood is a fulfilling feeling and Anita has been so overwhelmed by the feeling of being a mother that she