Television actor, Atharv Nahar had got married to his girlfriend, Pooja Dwivedi on February 5, 2022. They talked about their love story and honeymoon plans in an exclusive chat with BollywoodShaadis!

Television actor, Atharv Nahar had risen to fame with the show, Chakravartin Samrat Ashoka and had garnered a lot of appreciation for his stellar performance. He had also appeared in the Bhojpuri movie, Sasura Bada Paisa Waala 2. Apart from this, Atharv had also featured in other shows like Fear Files, Savdhaan India and Jai Jai Bajrangbali. Atharv had become a household name with his stint on television shows.

For the unversed, Atharv Nahar was in a steady relationship with his longtime girlfriend, Pooja Dwivedi, and the two had been dating for a decade now. The much-in-love couple had tied the knot on February 5, 2022, in Lucknow. Due to the pandemic, the couple had an intimate wedding, which was attended by their close friends and family members.

When Surekha Sikri Revealed Her Husband, Hemant Rage Was A Great Cook And Had Taught Her To Eat Fish

Rahul Mahajan Opens Up On His Age Gap Of Eighteen Years With Wife, Natalya IIina

Recommended read: B Praak's Love Story: Punjabi Singer Calls His Wife, Meera 'My Queen', Considers Her As A Blessing 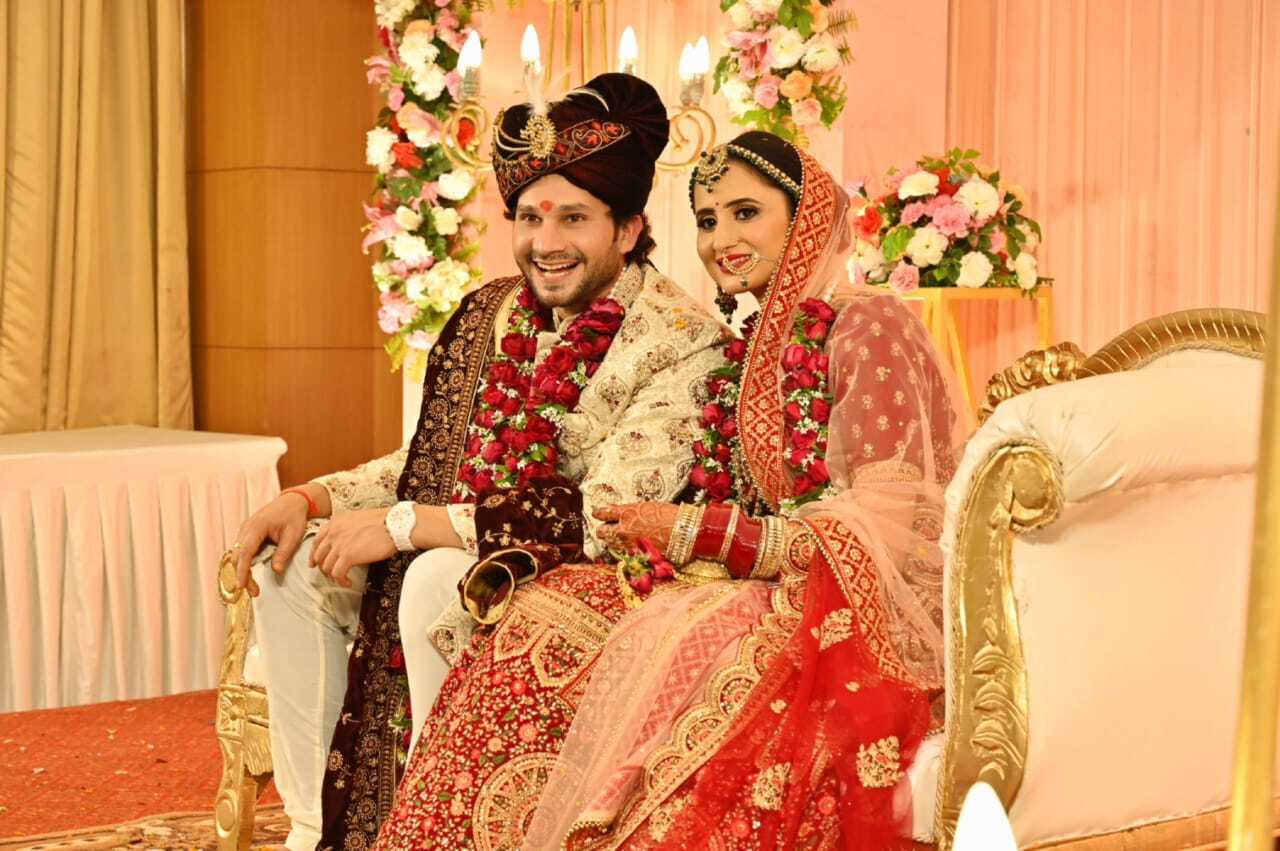 After their wedding, Atharv Nahar and his wife, Pooja Dwivedi had an exclusive conversation with BollywoodShaadis. Atharv and Pooja talked about their first meeting in a heart to heart conversation. The newly-wedded couple also opened up about their proposal and marriage. Talking about where and how they had met, Pooja said:

“We met at a family gathering as Atharv’s father and my dad are close friends. That's when our friendship started." 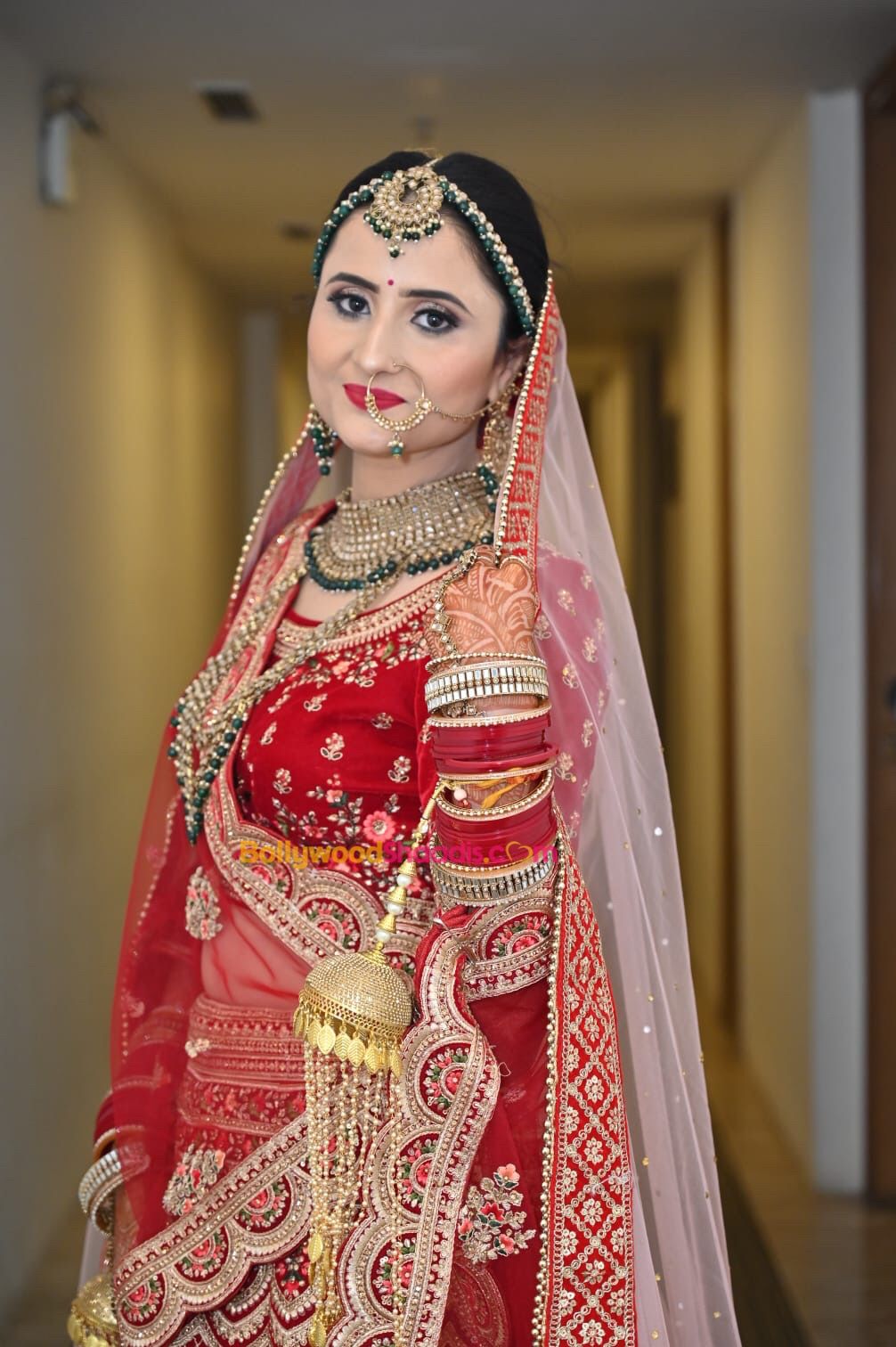 Pooja also shared a special anecdote related to her life when her then-boyfriend, Atharv had proposed to her in a unique way. She added that they had dated for 10 years before taking the plunge. Recalling the moment when Atharv had popped the million-dollar question, Pooja said:

“I really liked the way he proposed. He didn't say things like 'I want to make you my girlfriend'. He came to me and directly told me, 'I consider you as my wife, so are you ready to marry me?'" 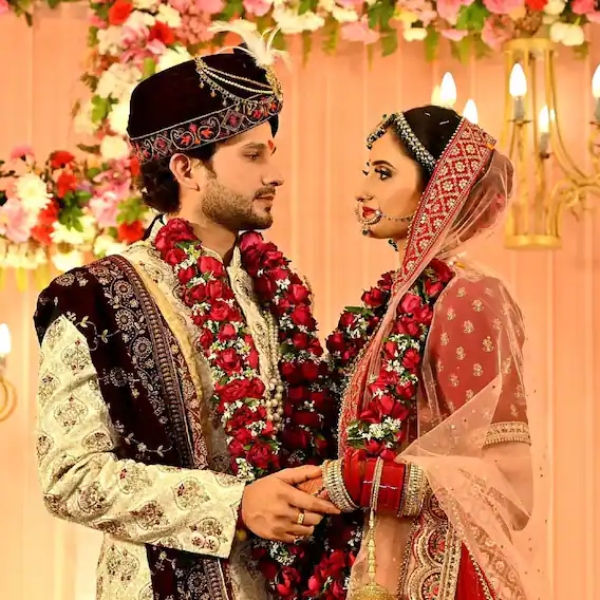 Meanwhile, Atharv also opened up about the qualities in his wife, Pooja, that had attracted him and had made him lose his heart to her. Talking about the same, the actor said:

“I am from North India, so I like people, who are associated with Indian culture and I like to stay grounded myself. Pooja is very simple and cultural, and her following the family's tradition is what attracted me to her. And, at the exact moment, I had decided that she will become my wife." 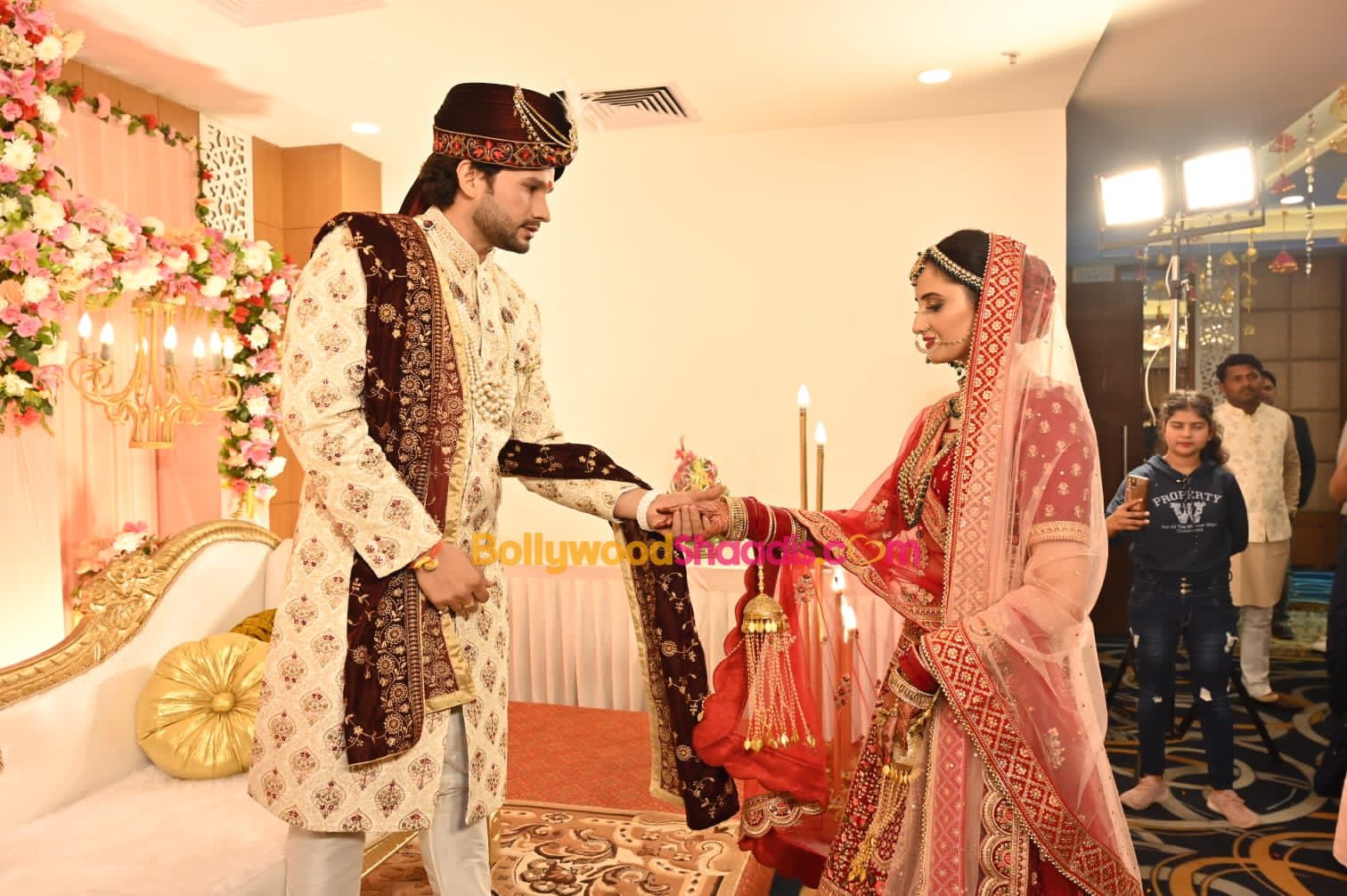 Atharv Nahar and Pooja Dwivedi had a low-key wedding. He shared that he had invited some of his celeb friends to his wedding, but due to the pandemic, they could not attend it. So, the couple is planning to host a wedding reception in Mumbai for their friends. He further spilled some beans about his honeymoon with his wife, Pooja. Revealing his honeymoon plans, Atharv said:

"Right now we are thinking of honeymoon vacation. We are planning to go to Kerala because I love Kerala. Apart from this, we can also go to Sri Lanka. However, after going to Kerala, I have to return to work directly."

Currently, Atharv and Pooja are enjoying a blissful married life. Atharv shared that he feels lucky to be married to the love of his life, Pooja. He also expressed his feelings after their marriage and said: A day after his wedding, i.e. on February 6, 2022, Atharv Nahar had taken to his IG handle and had shared love-filled pictures from his wedding with his long-time girlfriend, Pooja Dwivedi. The couple had looked lost in each other's eyes, and the wedding glow on their faces was clearly visible in the pictures. Along with the pictures, Atharv had penned a sweet note, thanking his friends and family for being a part of the celebration. His note could be read as:

"First, we would like to give thanks to God for blessing us with each other. Thanks to my parents who have taught me the true meaning of love and commitment. Thanx to my dear nephew Siddharth and my niece Dhriti. Thanx to Elder brother Rakesh Singh n my bhabhi n thank you my younger brothers n sisters. Thanks to our family and friends." 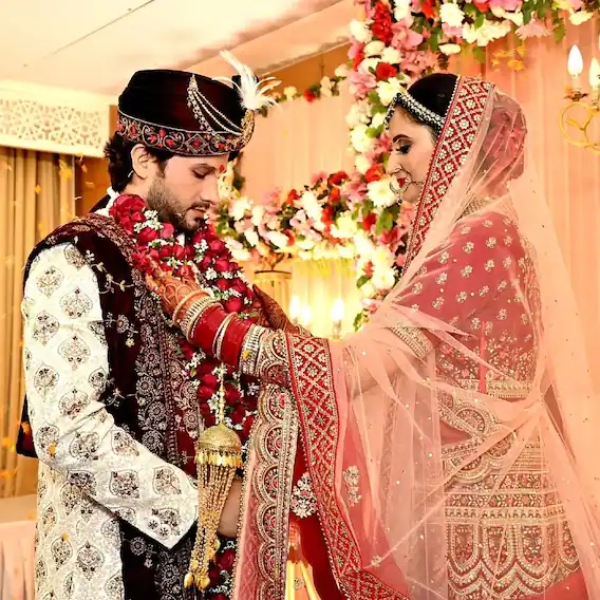 For the wedding, Atharv and Pooja had complemented each other in colour-coordinated outfits. Atharv had donned a cream-coloured embroidered sherwani and had completed his look with a maroon-coloured turban and a matching doshala. On the other hand, his bride, Pooja, had looked gorgeous in a heavily-embroidered red-coloured lehenga with gold work on it. She had paired her lehenga with a semi-sleeved blouse and had styled it with dual dupattas. She had completed her look with gold and emerald jewellery, which had included a maatha-patti, a choker, a nath, a long neckpiece and matching earrings. However, her red chooda and golden kaleeras had stolen the show! 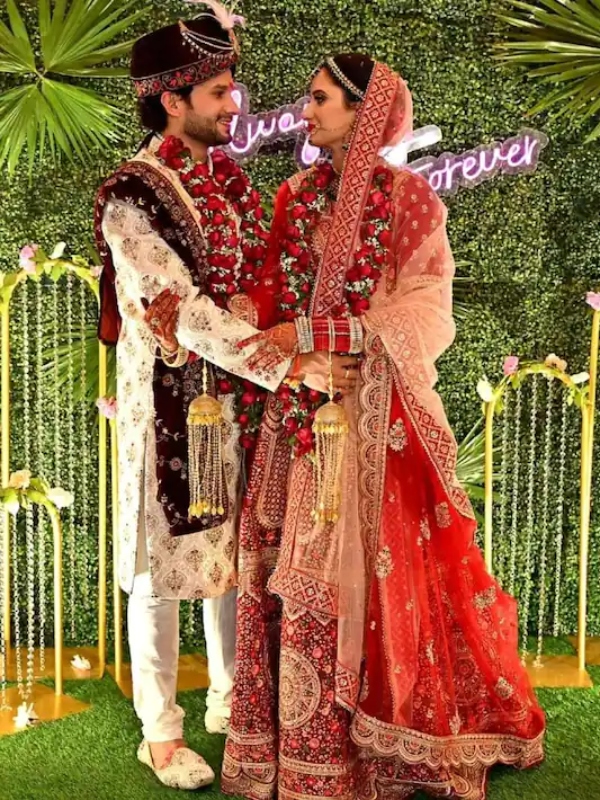 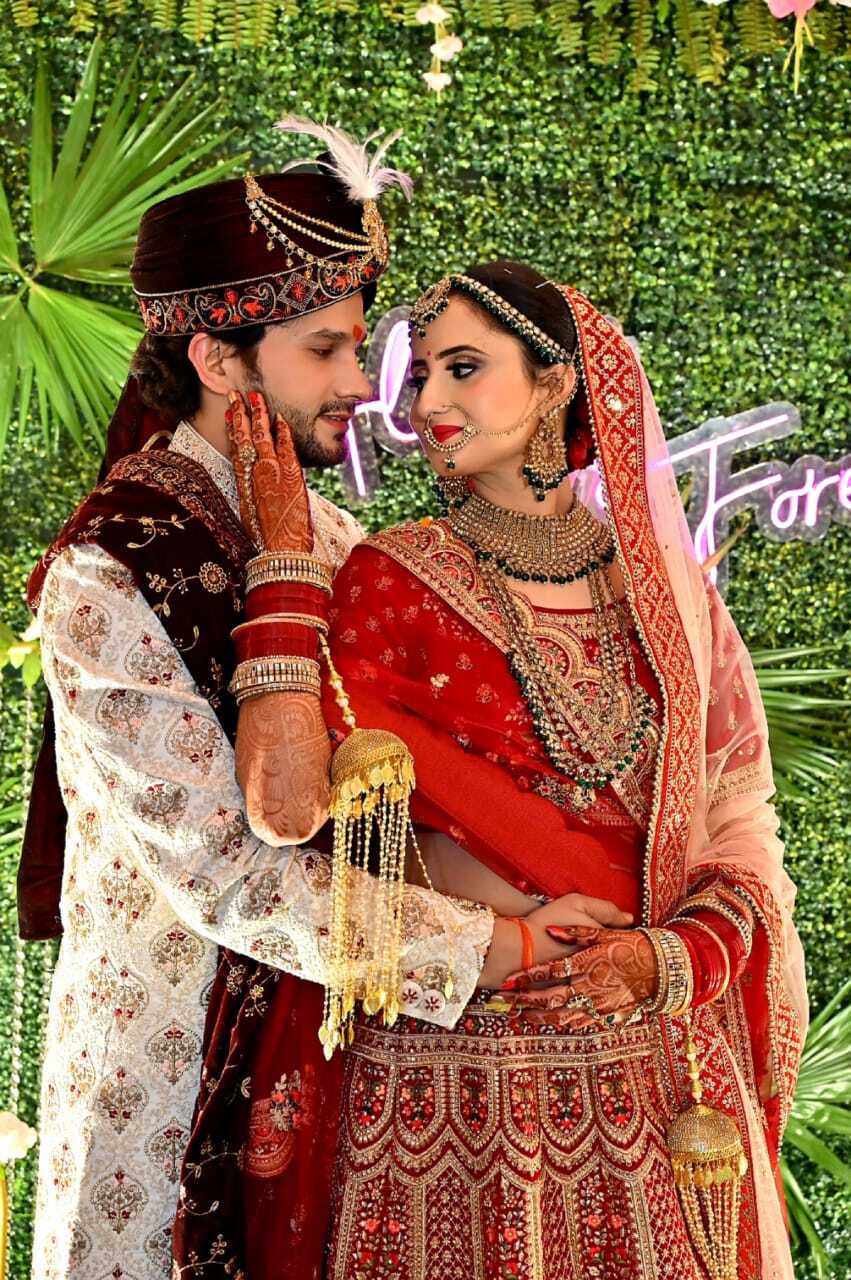 We wish Pooja and Atharv a lifetime of happiness!

Don't miss: Kusha Kapila And Zorawar Ahluwalia's Love Story: From Strangers At An Open Bar To Happily Ever After

When Surekha Sikri Revealed Her Husband, Hemant Rage Was A Great Cook And Had Taught Her To Eat Fish