After years of wait, Bharti Singh and Haarsh Limbachiyaa are finally experiencing a rollercoaster ride of pregnancy. Check out as they gave a sneak-peek into their soon-to-be-born baby's nursery!

Mommy-to-be, Bharti Singh is all set to embrace motherhood by welcoming her first child with her husband, Haarsh Limbachiyaa. Bharti and Haarsh have been maintaining a YouTube channel, LOL (Life of Limbachiyaa's), where they often share videos from their daily lives to entertain their audiences. And in the recent Vlog, Bharti and Haarsh gave a sneak-peek into their soon-to-be-born baby's nursery, and it's adorable.

A few weeks back, Colors TV had dropped a promotional video from their show, Hunarbaaz's upcoming episode, and it was simply magical. In the video, Haarsh Limbachiyaa could be seen taking blindfolded Bharti Singh on the stage of the show, which was decorated for her surprise baby shower. Later, the show's judges, Karan Johar, Parineeti Chopra, and Mithun Chakraborty, had also joined the couple to celebrate Bharti's godh bharai. Check out the video below:

Recommended Read: 'Tantra' Fame Munisha Khatwani To Get Married To Sameer Thakur In March After Postposing It Thrice

In the recent Vlog on their YouTube channel, Bharti gave her viewers a sneak-peek into her unborn baby’s room. The mommy-to-be revealed that they didn't have extra space for their kid, so she turned her husband, Haarsh’s workroom, where he writes video scripts and other content, into their baby’s nursery. She shared:

“When Haarsh and I bought this house, we forgot that people have kids after getting married. So, we turned two bedrooms into one big room with a couch. We wanted it like a big hotel room, now we don’t have any space left for the child.”

Bharti also revealed that her hubby, Haarsh, has not seen the room yet and added that he's going to be angry when he finds out what she has done to his room. So, in the next segment of the video, when Haarsh saw the room, he reacted with a sarcastic comment and said:

“Thank you Bharti, for turning my work room into a teenage girl’s room. It looks like a Barbie doll’s fan’s bedroom. What is all this yaar? Woh kaun hota hai humaari jagah lene wala? Main kahaan baith ke kaam karunga? Bacchha ya Bacchi, whatever it is, you’ve ruined the room.”

Bharti also mentioned that the room was designed by her, and it was yet to be completed. The room featured pink and blue closets and large windows with white curtains hanging on them. The large cupboards stretched from ceiling to floor covered an entire wall. Apart from it, there was a huge maroon couch placed near the window. Bharti called the room 'perfect' for their baby and revealed that she loved it.

On February 21, 2022, Bharti Singh and Haarsh Limbachiyaa had shared a video titled "Kya Hum Baby Ke Liye Ready Hai?" on their YouTube channel. The expecting parents had answered some of the frequently asked questions by their fans related to their soon-to-be-born baby in the video. In one of the segments, Haarsh had revealed that Bharti is extremely emotional, and she never misses a chance to shed tears. To which, Bharti had reacted and had called her hubby, 'Patthar dil'.

In another segment, Bharti and Haarsh were seen arguing about whom would their kid resemble the most. The two had taken sarcastic digs at each other and yet couldn't decide the answer to this question. The couple had also discussed other questions like who will miss the shoots for the kid, who will the baby call first, and who will the baby snuggle with at night. Their answers were hilarious, and we couldn't stop laughing! However, what had made us go ROFL was that when Haarsh had shared that he wishes to have four kids with Bharti, she had given him a savage reply. Comparing Bharti to her mom, Haarsh had said that Bharti should have at least 4 kids to leave her mom behind. To which, Bharti had said: Earlier, in an interview with The Times Of India, Bharti Singh had opened up about her pregnancy journey so far and had talked about her husband, Haarsh Limbachiyaa. The comedienne had lauded her darling hubby for taking care of her physically and mentally, as Haarsh never skips a chance to make her smile. Talking about her late-night cravings during her pregnancy, Bharti had revealed that she was never a big admirer of dairy products like milk or paneer. However, during her pregnancy, she has cravings in the middle of the night. Bharti had also added that Haarsh leaves no stone unturned to fulfil her pregnancy cravings. She had said:

"Harsh is like my nurse, he heats the water and presses my back when it pains. At night I get these unusual cravings for channa bhatura or dairy products like paneer and Harsh is then busy checking food apps, which will deliver such food items home. I have never been fond of paneer or milk but I feel all those cravings in the middle of the night." 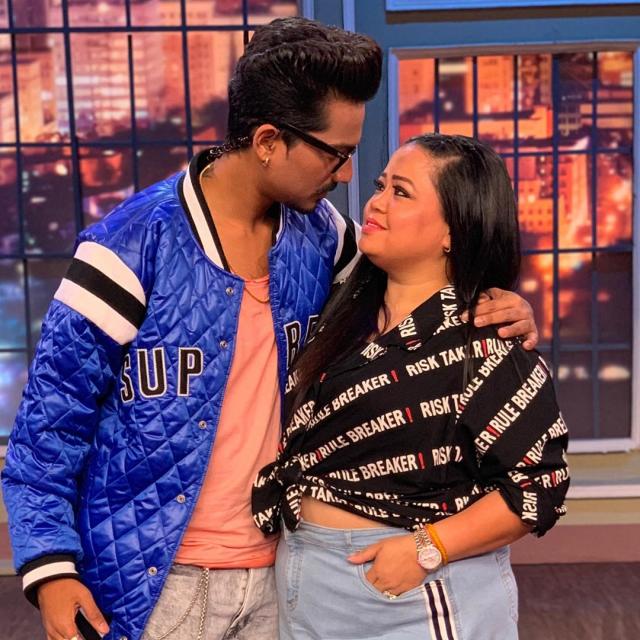 For the unversed, Bharti Singh and Haarsh Limbachiyaa are expecting their first baby in April 2022.