In a recent interview, Bharti Singh opened up about her husband, Haarsh Limbachiyaa's role while taking care of her late-night food cravings during her pregnancy days.

It was on December 10, 2021, when telly world's most adored and sought-after couple, Bharti Singh and Haarsh Limbachiyaa, had shared a video on the latter's YouTube channel to announce their first pregnancy. In the video, at first, Bharti was seen looking at her self-test pregnancy kit and later, she was stunned to see the two lines on it. Further in the video, after dancing with joy, Bharti had woken her husband, Haarsh and had announced the 'good news' to him, who had looked super-excited after hearing the pregnancy news.

The video is still doing rounds on the internet and holds a special place in the hearts of Bharti Singh and her husband, Haarsh Limbachiyaa's massive fanbase across the nation. Since then, the couple is leaving no chance to impress everyone with the way they're embracing their first pregnancy together. Bharti and Haarsh are inspiring everyone by crushing age-old myths about pregnancy.

In an interview with The Times Of India, Bharti Singh opened up about her pregnancy journey so far and talked about her husband, Haarsh Limbachiyaa. The comedienne lauded her darling hubby for taking care of her physically and mentally, as Haarsh never skips a chance to make her smile. Taking about her late-night cravings during her pregnancy, Bharti revealed that she was never a big admirer of dairy products like milk or paneer. However, during her pregnancy, she has cravings in the middle of the night. Bharti also added that Haarsh leaves no stone unturned to fulfil her pregnancy cravings. She said:

"Harsh is like my nurse, he heats the water and presses my back when it pains. At night I get these unusual cravings for channa bhatura or dairy products like paneer and Harsh is then busy checking food apps, which will deliver such food items home. I have never been fond of paneer or milk but I feel all those cravings in the middle of the night." The pregnant comedienne, Bharti Singh, has been quite vocal about her maternity, and in an interview with Bollywood Life, she had opened up about how she's taking care of herself. The mommy-to-be had shared that she has been on a healthy diet and exercising regularly to avoid any complications during her delivery. She had said:

"I have been waking up early in the morning. I go for walk, and then I eat soaked almonds and something healthy for my breakfast like sprouts or something green with lots of fruits and juice. Later in lunch, I eat bajra, jawar, corn ki rotis, I try to eat as healthy I can. I don't rely on anyone to give me food on time. I make sure that I myself do it as right now the person who can take the best care of me is 'me'." A few weeks back, Colours TV had dropped a promotional video from their show, Hunarbaaz's upcoming episode, and it was simply magical. In the video, Haarsh Limbachiyaa could be seen taking blindfolded Bharti Singh on the stage of the show, which was decorated for her surprise baby shower. Later, the show's judges, Karan Johar, Parineeti Chopra, and Mithun Chakraborty, had also joined the couple to celebrate Bharti's godh bharai. Check out the video below:

For the unversed, Bharti Singh and Haarsh Limbachiyaa had tied the knot on December 3, 2017, at a destination wedding in Goa. 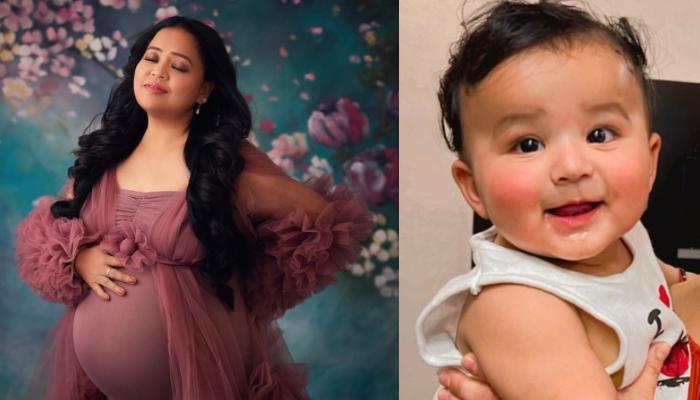 From presuming motherhood to be a joyful ride to actually realising the responsibilities of raising a child, a woman grows more potent with the changing roles of her life. However, even today, society sets unrealistic rules and ideas about pregnancy and motherhood, which are nothing but intolerable. Celebrity mommy, Bharti