'Bigg Boss 14' contestant, Rubina Dilaik revealed she and her husband, Abhinav Shukla were on the verge of getting divorced in her immunity task. Find out! 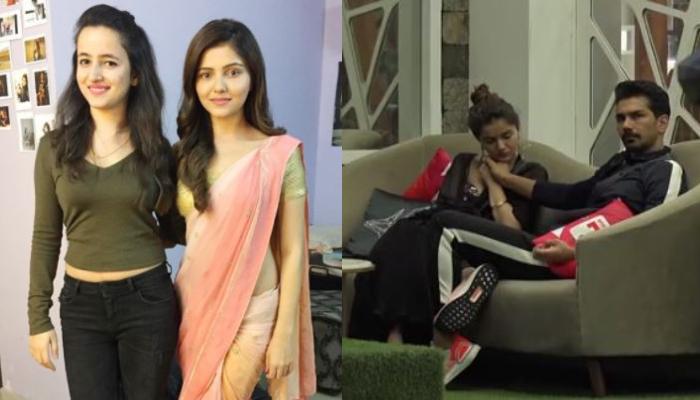 Entertainment industry's beautiful couple, Choti Bahu-Sindoor Bin Suhagan fame, Rubina Dilaik and her husband, Silsila Badalte Rishton Ka actor, Abhinav Shukla had tied the knot on June 21, 2018, and since then they have been giving major couple goals to the millennials. However, at the moment, the couple is in the Bigg Boss 14 house and are not having the best of times together. In recent episodes of the show, we have seen them having some heated arguments. (Recommended Read: Gauahar Khan And Zaid Darbar Announce Their Wedding Date, Reveal It To Be An Intimate Ceremony)

However, in the latest episode of the reality show, Bigg Boss 14, Rubina Dilaik revealed shocking details about her marital life with her husband, Abhinav Shukla and now, her sister, Jyotika Dilaik has reacted on the same in her recent tweets. Scroll down to know it!

In the latest episode of Bigg Boss 14, television actress, Rubina Dilaik had shockingly revealed that she and her husband, Abhinav Shukla were on the verge of getting divorced. After hearing Rubina's confession, her sister, Jyotika Dilaik took to her Twitter handle and wrote, "I wonder @RubiDilaik and @ashukla09 were under so much pressure during the initial weeks of their entry in BB house. Still they managed to play so well. #RubinavForever" in her first tweet. Soon Jyotika dropped another tweet and heaped praise on her behen and jija ji as her tweet can be read as "Sabne apni deepest secrets btai or definitely sb k liye vo difficult hoga. Sabhi contestants ne jo secrets btai vo sb unka past tha but Rubinav k to present mai chal rha that,they were battling quietly inside their hearts yet smile was always there on their faces. RubiNav Forever." Take a look:

For the uninitiated, Rubina Dilaik had disclosed some major details about the marital issue she and her husband, Abhinav Shukla had faced in their married life and had also revealed that they were on the verge of getting divorced. She had said, "Mera aur Abhinav ka Big Boss karne ka sabse bada kaaran ye tha ki humne ek dusare ko November tak ka time diya tha. We were about to get divorced. Agar hum iss show main saath nahi aate, toh shayad hum saath bhi nahi reh paate." (Don't Miss: Anita Hassanandani Flaunts Her Baby Bump In A White Jumpsuit, Steps Out With Hubby, Rohit Reddy)

In an interview with the PTI, television actress, Rubina Dilaik had revealed the reason why she and her actor-husband, Abhinav Shukla had decided to participate in the show, Bigg Boss 14. The actress had stated, "To manage our private life in a public setup now, where cameras will constantly be on us, will throw challenges and reveal things about us. It's going to be a testing time for our relationship, but that motivates us. I didn't fit in any category, so I thought why to waste time. But they wanted both of us, which made it challenging." (Also Read: Shaheer Sheikh On Creating A Home With Wife Ruchikaa Kapoor, Reveals Why They Planned A 2020 Wedding)

What do you think about Rubina and Abhinav's marital issues? Let us know!

Love is the answer to all the problems and if there is love, one can win every war. Ups and downs are a part of any relationship but what helps them stay strong is the mutual respect a couple holds for each other. While we have seen many beautiful relationships in