He Didn't Know She Was A Famous Actress When They First Met, She Still Refuses To Believe It

He Didn't Know She Was A Famous Actress When They First Met, She Still Refuses To Believe It

Love knows no boundary! When it takes charge of one’s life, it can make him or her fall for a person who has no similarities in any remote possibility. Then, a Telugu guy relishes Sindhi kadhi and a Sindhi girl, does everything a traditional Telugu bride would do, even the marriage. Something of this sort happened between Anita Hassanandani and Rohit Reddy, making them one of the most endearing couples of the television industry.

Their love transcends all limits and creates an infinite world where they are not just the husband and wife, but also best of friends, strongest pillars of support for each other and a perfect team. Read on to get smitten by the fairytale love story of Rohit, a businessman from Goa and Anita, a television star.

Unseen Picture Of Anita Hassanandani And Rohit Reddy From One Of Their First Dates, Check Inside

Anita Hassanandani And Rohit Reddy's Romantic Getaway In Europe, Pics And Video Inside

Yuvraj Thakur Openly Accepted His Love For Bani J, Shared A Pic Kissing Her With A Romantic Caption

She Stopped Talking To Him Coz He Was Late For A Movie; 1 Year Later, He Did This For Her

Recommended Read: Do You Know How Vivek Dahiya Proposed To Divyanka Tripathi? 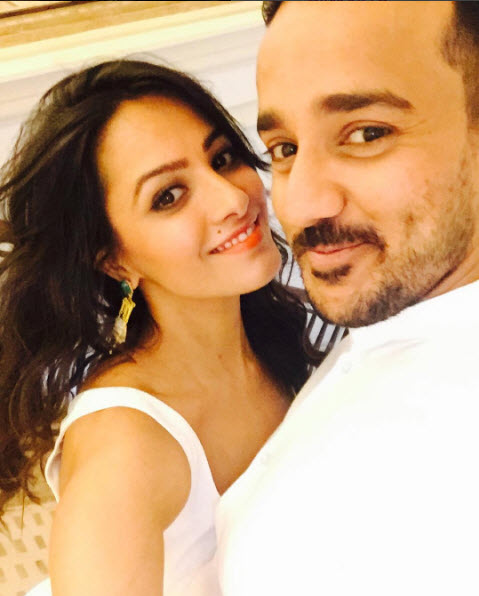 Rohit and Anita used to go to the same gym. Anita’s gorgeous Indian looks attracted Rohit’s attention in the gym. Later, he spotted her again outside a pub.

In an interview Rohit said:

“One day I saw her outside a pub, waiting for her car and decided to approach her. I went like a hero and approached her with the corniest lines, she was startled. That was a brief encounter.” 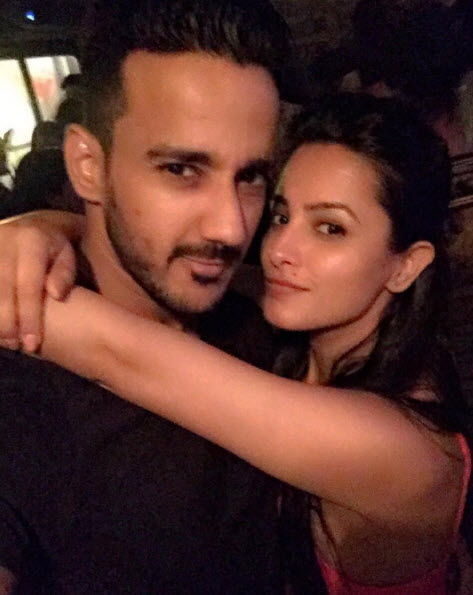 His attempts to know her more didn’t stop here. It was followed by Facebook messages and chats. Being a purely news watcher on television, he was completely unaware that she is a famous actress.

'Gehraiyaan' Actor Siddhant Chaturvedi Buys A Swanky Bike Worth Rs. 21 Lakhs, Twins With It In Black

Neha Dhupia Shared An Adorable Picture With Her Newborn, Guriq While Enjoying Sunset At A Beach Anita still can’t agree on Rohit’s ignorance about her acting career, and shared her views saying: Post their first meet outside the pub, through a common friend they met again. From his first impression, Anita found Rohit a thorough gentleman and was flattered on his dimpled smile and great physique.

Also Read: Anita Hassanandani Was Missing Her Husband And So This Is How She Is Letting Him Know 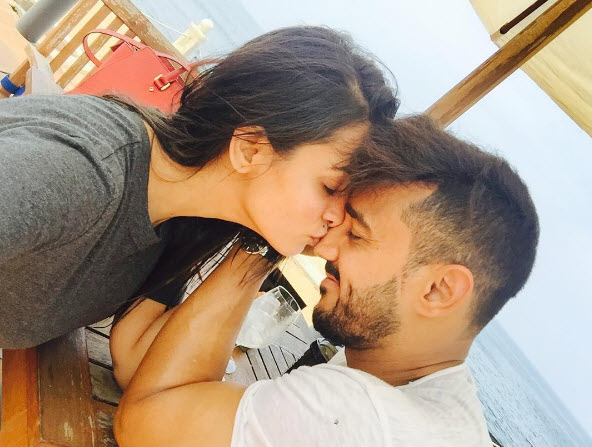 It didn’t take much time for Rohit and Anita to realise, that there is something beyond just mutual liking. Thus, after the first few dates, they knew that they would love to be life partners. Anita shares an interesting event that made her surer about her choice. 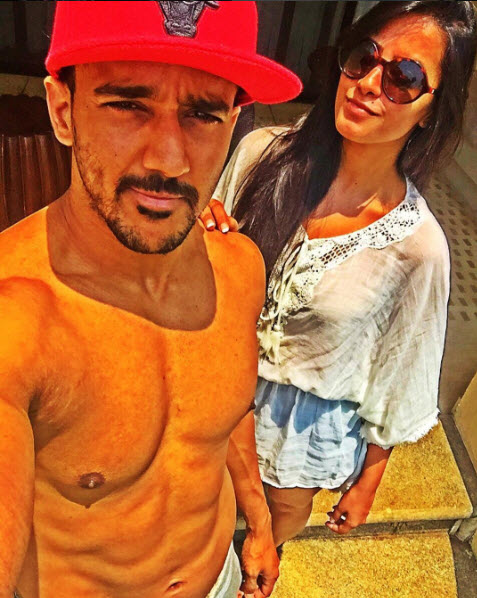 “I used to love drinking in my younger days. This one night I went overboard and got into a fight with Rohit. It was all my mistake. Woke up the next day, apologised to him saying ‘I’m sorry Rohit I’ll give up drinking if you want’. He replied saying, ‘No you don’t have to give up on anything for me. Just try staying in control. You are a public figure, you have to be careful,’ – and that was the moment I knew he’s my man! Who loves me for ME; with all the flaws? He didn’t want me to change a thing for him. It’s been 6 years and the only change in me is that I’m a better, a more positive person. Not only that, I’m more successful than I used to be!” 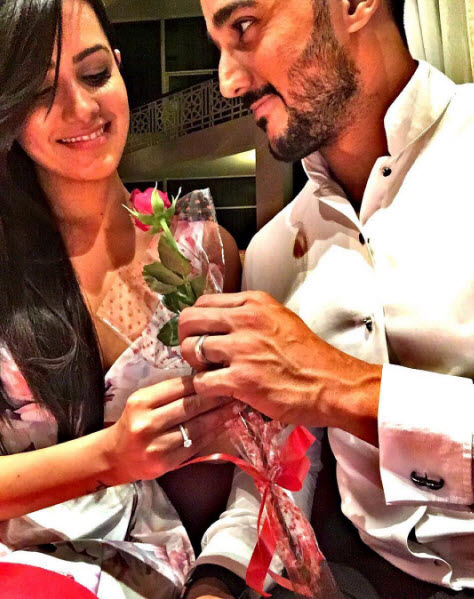 Also Read: Anita Hassanandani Shared A Throwback Video From Her Wedding And It's So Romantic

This very moment, Anita knew that Rohit is the man of her dreams! The next big step was informing the families. Rohit took the first leap.

Here is what Rohit shared:

“I wanted to marry so I approached her mom, she is a woman of few words but she didn’t have a problem with our relationship. Anita’s friends were very supportive and Anita herself was like an angel.”

With both the families’ approval, the couple got hitched in October, 2013, in Goa.

Anita got the initial of her husband Rohit Reddy inked as a gift to him on her first wedding anniversary.

Watch this video of her tattoo:

"This is my second tattoo and I chose the most delicate design. There is a heart just above the initial. The first one is a butterfly on my foot. The beauty of a tattoo is that it should not be in-your-face, so I chose this spot as it's not too obvious." The couple’s wedding was one of those extravagant affairs. What makes it all the more interesting, is that both Rohit and Anita took care of every minute detail on their own. 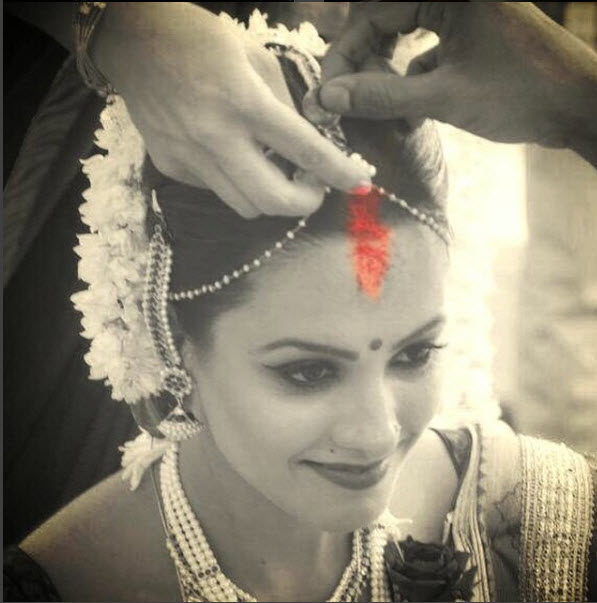 “Usually, everything is too formal in wedding, but ours was chilled out. We were all drunk at the sangeet and dancing on the bar top.”

Also Read: 11 Things You Need To Consider Before You Opt For A Destination Wedding 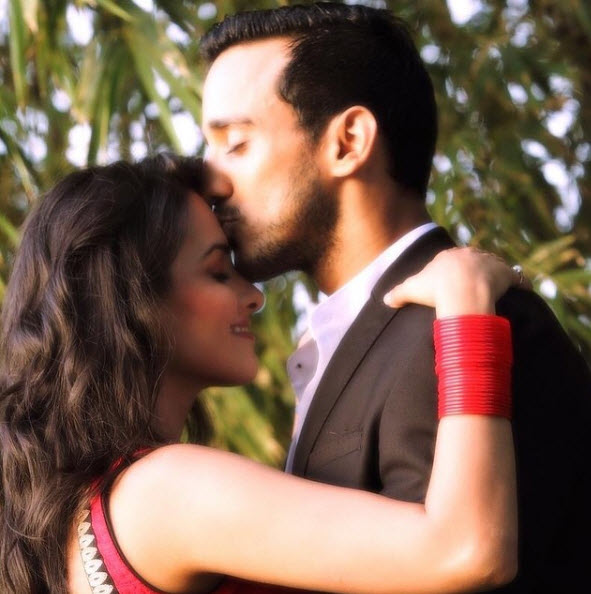 Being from an army background, Rohit grew up travelling to different states and never felt the need to learn his mother tongue Telugu. Whereas, Anita despite being a Sindhi girl is quite well-versed with Telugu and acted in many movies in Tollywood. 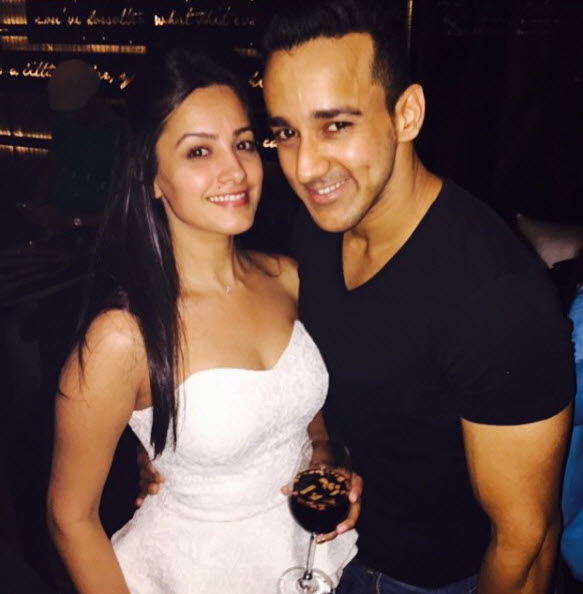 “She knows Telugu better than me, so she bonded with my family over language. I haven’t made an effort to learn Sindhi yet, I only know Sindhi kadhi.” 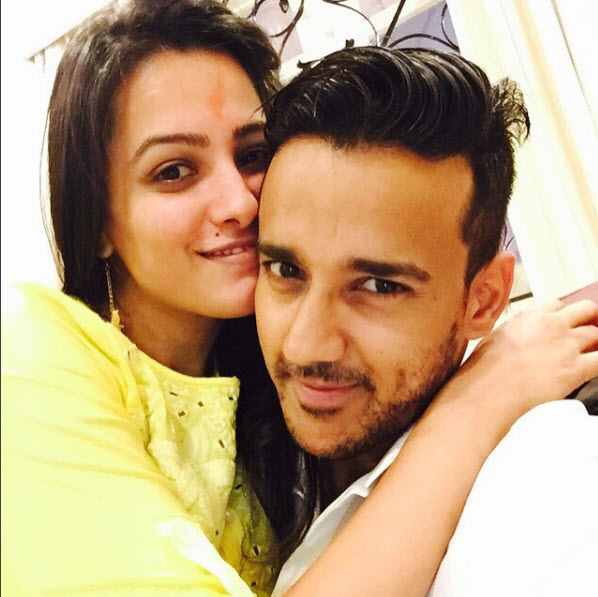 Anita swears by her love for Hyderabad. She feels as she is much better in Telugu in comparison to her husband, it was a smooth transition for her to get along with his family. Sharing her bond with her in-laws, she said:

“His mom is very chilled out, although I still get nervous speaking to his dad, maybe because of my respect for him.” Rohit loves her sense of duty, respect and care for his family members, especially parents. He feels fortunate to have found a girl who has synced well with his family. Despite her busy acting schedule, she ensures to keep in touch with his folks. Similarly, Anita admires Rohit for being very appreciative and says:

“Even today, he makes it a point to thank me, whenever I do anything for him, that’s very lovable.” 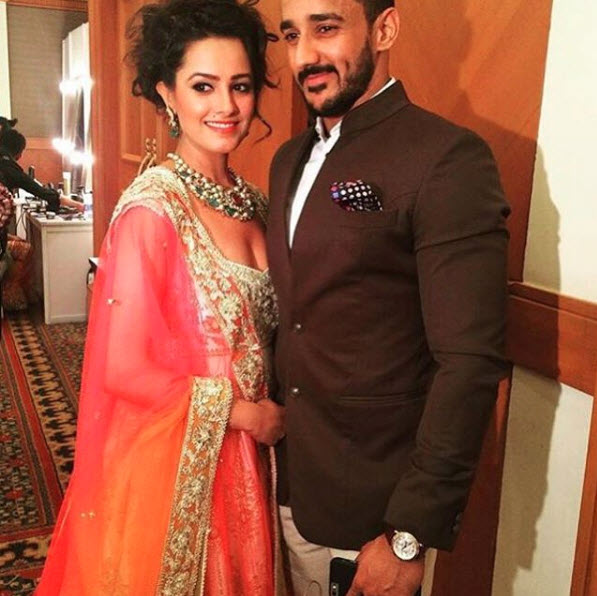 “I think that generally a woman brings in luck for her husband after marriage but in my case my husband is lucky for me."

You May Like: 7 Inventive Ways To Style Your Indian Wear Without A Dupatta

Some of the best “WE” time 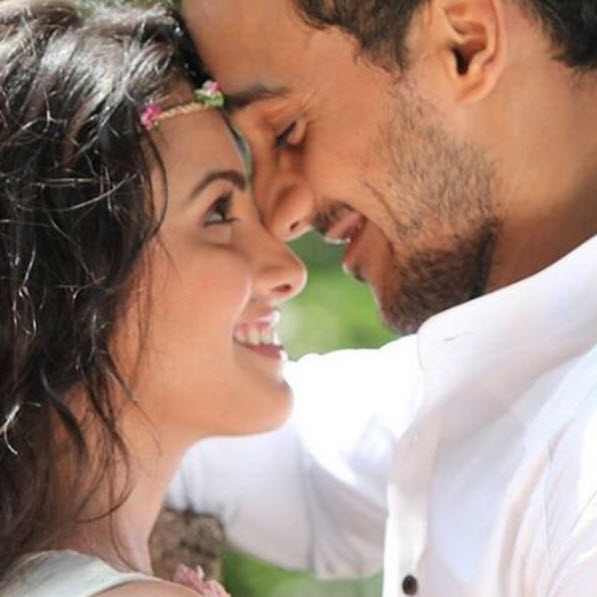 Fun has just begun for this young couple. Even post marriage, they still party a lot and go on dates. The duo loves to travel and often likes to visit a place which ensures them the needed privacy, away from the media attention. Among many, one of their most favorite holidays was a trip to Goa.

“We were in this resort where there was no mobile network, totally cut out from the outside world, and we had our own private beach, so we enjoyed our time together.” 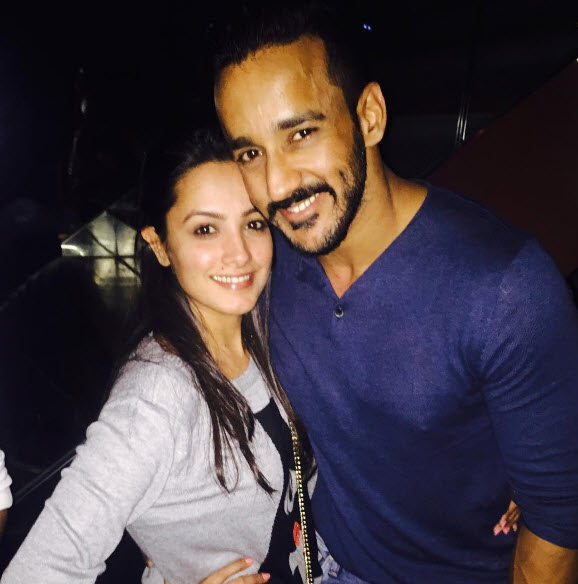 Praising the place, Anita joined him in unison and shared:

“Walking on the beach, chilling out at the bar, everything was memorable.” 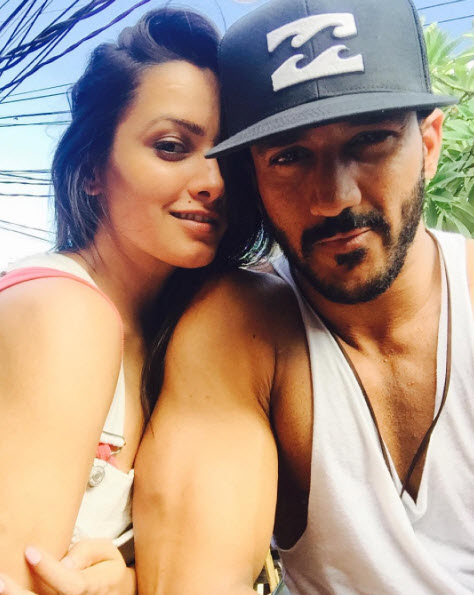 The couple also love spending quality time at their home. They love doing everything together. So, what is that one favourite thing that Anita loves to do with her darling hubby. Here is what she said:

“There’s no one thing. We are best friends first, so everything we do, we enjoy to the fullest. But if I had to pick one, it would be lazing with him in bed and watching TV.” 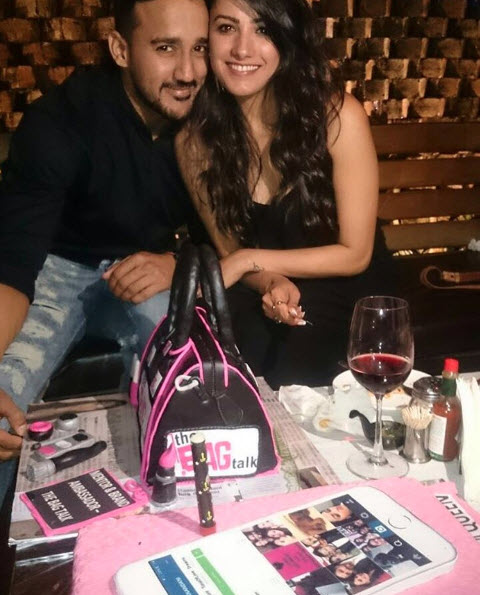 Every couple has its ways to woo each other. With Anita and Rohit, things are pretty simple. Often the wife complains of husband forgetting the important dates, especially her birthday. But, here, Rohit not only remembers it, but he literally competes (friendly one) with Anita to outrace her in giving surprises. At the same time, Anita calls Rohit a naughty man, who loves to do mischief. But every time he gets away with it, with his appealing dimpled smile. 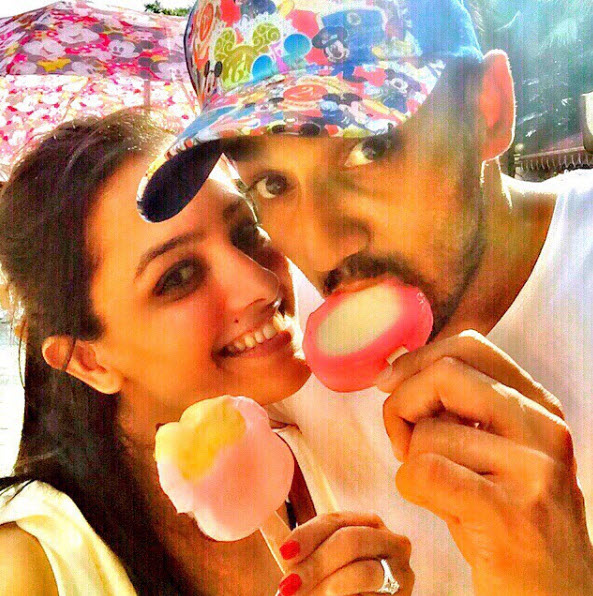 “It has to be his honesty. I feel the strength of any relationship is to be true to each other. I also love that there’s mutual respect between us. It’s such a simple thing if you come to think about it but it goes a long way in strengthening the bond. It really is the foundation, I feel.”

What keeps them going? No relationship is perfect. Every marriage has its highs and lows, where there is love, there are fights as well. So how do they deal with it? What is that magic in their relationship that keeps them going? 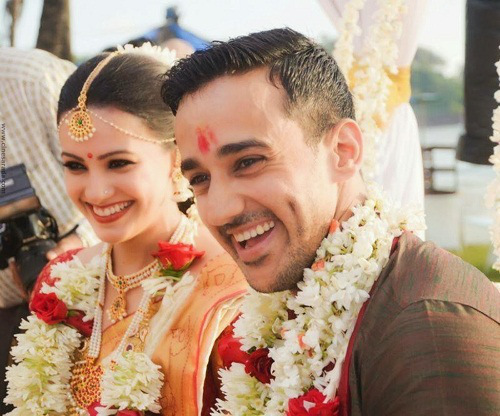 “Well all relationships have their share of ups and down. During the downs too, we never miss saying ‘I love you’ to each other. If we fight, we say it over a message. It’s been 6 years since we met, of which 3 we’ve been married and we haven’t missed a day. More than enough to keep us going, isn’t it?”

Recommended Read: Finally, Anita Hassanandani And Rohit Reddy Have Shared 'The Good News' Of Their Lives

When many couples hesitate to commit for tying the knot, Anita and Rohit prove marriage doesn’t bring an end to one’s love, but let it get a full bloom. Get inspired by them and experience how beautiful the feeling is when you marry the person you love.

Unseen Picture Of Anita Hassanandani And Rohit Reddy From One Of Their First Dates, Check Inside

Anita Hassanandani And Rohit Reddy's Romantic Getaway In Europe, Pics And Video Inside