Dimpy Ganguly Is Enjoying A Family Vacation At The Beach, Shares A Selfie That's Every Mom Ever

Dimpy Ganguly is currently vacationing with her children and husband at the beach. Her recent picture is relatable to every mom out there. Check it out!

After having a successful career and a failed marriage, Bigg Boss 8 fame, Dimpy Ganguly is now happily married to her childhood friend and crush, Rohit Roy. Apart from being a darling wife, Dimpy is a doting mother to two wonderful kids, a daughter, Reanna Roy and a son, Aryaan Roy.

On June 20, 2021, Dimpy Ganguly's daughter, Reanna Roy had turned five, and her mother had organised a mermaid-themed bash for her. Dimpy had taken to her Instagram handle and had shared two happy pictures of her little doll. In the first picture, we could see Reanna donning a mermaid costume and looking adorable. In the second picture, we had spotted her smiling. Alongside it, Dimpy had written:

Dimpy Ganguly Captures Her Son Aryaan Trying To Brush His Two Teeth, Standing On A Stool In Bathroom

Dimpy Ganguly Shares Cute Glimpses Of Her Fun Day Out With Her Kids, Reanna And Aryaan

"One little mermaid is 5 today... and she can't stop smiling! Happy birthday my sunshine...momma is a total wuss today!" Dimpy Ganguly is currently enjoying a vacation at the beach with her husband, Rohit and her kids, Reanna and Aryaan. She took to her IG stories and shared a series of pictures and videos to give a glimpse of their vacation. In one of the stories, she shared a selfie of herself looking absolutely gorgeous but what caught our attention was the note that was written. Atop the picture, Dimpy wrote a caption that's relatable to every mommy ever. She penned:

"The mom who is never in the family pictures." 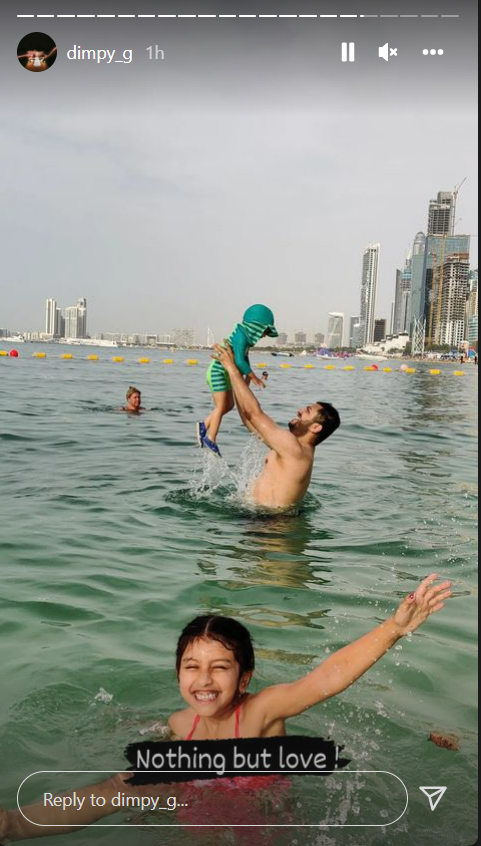 Dimpy shared another selfie with her hubby dearest, Rohit Roy, and her hilarious caption atop it was impossible to miss. She wrote, "And the parents who never get a picture together". On February 5, 2022, on the occasion of Basant Panchami, Dimpy Ganguly had performed a puja at her home. The doting mommy had taken to her IG handle to share glimpses from the same. The pictures had shown her kids, Reanna and Aryaan twinning in off-white ethnic ensembles. While Aryaan had looked adorable in a kurta-pyjama, Reanna had donned a suit. Sharing the pictures, Dimpy had written:

"So we had a little "Saraswati Puja" celebration at home today, and the kids were so eager to participate..it melts my heart. (I think the highlight was wearing Indian clothes)Happy Vasant Panchami to all those celebrating!"

Well, Dimpy's situation is clearly every mother's ever!

Don't Miss: Mira Rajput Kapoor And Shahid Kapoor Fight Over A Burger, The Latter Says, 'This Is War' Television actress, Dimpy Ganguly's third child, Rishaan completed six months on January 27, 2023. And Dimpy shared the cutest pictures of her three kids celebrating her youngest son's half birthday. For the unversed, the mother of three is married to her businessman hubby, Rohit Roy. They were blessed with their first kid, Reanna, in