Divya Agarwal Asks Fans To Stop Trying To Get Her And Varun Sood Back Together, The Latter Reacts

Varun Sood and Divya Agarwal have announced their breakup, and since then, their fans have been trying to get them back together. Now, both of them have reacted to the same. Check it out!

Ever since Varun Sood and Divya Agarwal had made their relationship official, their fans have been waiting for their wedding news to come through. However, their breakup news has left them devastated. And some of them couldn't take their split up in the right way.

On March 6, 2022, Divya Agarwal had taken to her Instagram handle and had shared her breakup news with an Instagram post, wherein she had bared her heart out and had stated that she is on her own now. An excerpt of her caption could be read as:

"I hereby formally declare that I'm on my own in this life and would like to take my time to live the way I want to! No, it's not always necessary to have big statements, excuses and reasons for a decision. It's just my choice to step out of it. I really value and love all the happy moments I spent with him. He's a great guy! He will always be my best friend. Please respect my decision."

Read This: Mommy-To-Be, Debina Bonnerjee Recalls Having A Difficult Time Trying To Get Pregnant Varun and Divya have officially broken up, and some of their fans have started the blame game that Varun Sood's alleged relationship with Madhurima Roy has led them to their break up. Now, Varun has taken to his Twitter handle and opened up about his breakup and tweeted:

"Hey guys! Just want to address this to everyone. Let people breathe. If 2 people are quiet about something they are going through something trying to figure something. Quit the blame game. Thoda space please." 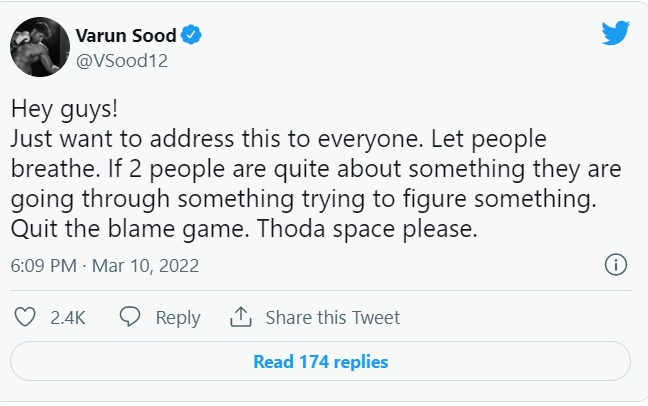 A while ago, Divya also shared a post on her Twitter handle and talked about how people have been forcing her to get back to her past, which is not possible for her. Further addressing to her fans, she requested them to stop trying. She wrote:

"You know what hurts the most? people want to see me somewhere and I don't want to be there. They force, they threat, they cry.. nobody knows what happens in a house.. nobody needs to know ! This social pressure will not move me one bit ! SO STOP TRYING!"

Also Read: Kartik Aaryan Gets A Weird Marriage Proposal By One Of His Female Fans, He Gives A Hilarious Reply 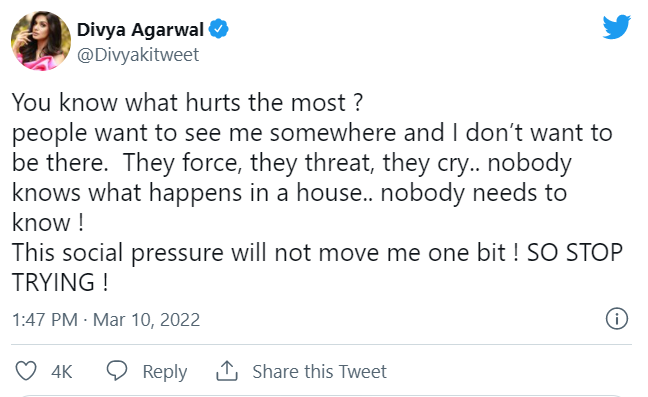 Even though Divya called her ex-boyfriend an honest man and her best friend, the actor's cryptic post on her IG handle ignited the sparks of getting cheated on. She shared a picture with a quote that can be read:

"A woman doesn't just up and leave you overnight. You've been fucking up for a while now bro." 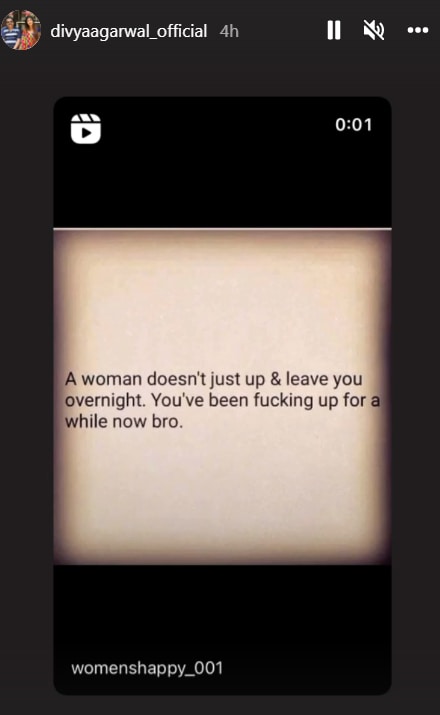 What are your thoughts about Divya and Varun's breakup? Let us know! There was a time when the winner of the controversial reality show, Bigg Boss OTT, Divya Agarwal and Khatron Ke Khiladi 11 fame, Varun Sood, were referred to as the most sought-after couples in the television industry. However, with time the cracks started appearing in their relationship, and in the