Esha Deol Takhtani is spending the 'self-quarantine' time with some 'bed time cuddles'. Esha posted a selfie with her baby girl, Miraya's feet on her face. Scroll to see the adorable click.

When Esha Deol Takhtani had announced her second pregnancy with a picture of her firstborn, Radhya Takhtani posing on a couch, on which, 'I'm being promoted to "BIG SISTER"' was written, we eagerly waited for their little one to arrive. And when she did, not only the Deol and Takhtani clans were on cloud nine but their fans too, rejoiced! Esha and her hubby, Bharat Takhtani had posed for the shutterbugs outside the hospital with their two angels, Radhya and Miraya Takhtani and we were all hearts for their beautiful family picture. (Also Read: Aishwarya Rai Shares A Note For Her 'Guardian Angel', Krishnaraj Rai On His Third Death Anniversary)

Finally, when Radhya Takhtani had turned two on October 20, 2019, Esha Deol Takhtani and Bharat Takhtani had introduced their five-month-old baby girl, Miraya Takhtani to the world, and we were astounded by the uncanny resemblance of the two angels of Deol-Takhtani family. Ever since then, Esha has been treating her fans with frequent glimpses of her baby girls and we couldn’t thank her enough for making us smile with the pictures of Radhya and Miraya.

While we are dealing with the COVID-19 quarantine, Bollywood is making the most of the isolation phase by spending quality time with their families, which they are unable to do with the hectic work schedules. Esha Deol Takhtani too, is spending the ‘self-quarantine’ time with some ‘bed time cuddles’. Esha posted a picture with Miraya’s feet on her face as she smiled for the selfie and captioned it as “#bedtimecuddles #stayhome #staysafe #selfquarantine.”

With a hectic schedule of promoting her debut book, Amma Mia, Esha Deol Takhtani makes sure not to sideline her family, especially her two daughters, Radhya Takhtani and Miraya Takhtani. On March 15, 2020, Esha had spent the Sunday with her sister, Ahana Deol, brother-in-law, Vaibhav Vohra, hubby, Bharat Takhtani, nephew, Darien Vohra and daughters, Radhya and Miraya. Ahana and Esha had posted glimpses of the same on their respective Instagram handles. While Esha had posted a picture with her youngest, Miraya and had captioned it as “Amma & Miu #sundayvibes #mirayatakhtani”, Ahana had posted a #FamJam picture with everyone in the frame and had written, “Sunday chilling sessions #famjam #crazybunch #talkingaboutmygeneration #minius.”

A day after giving birth to her little angel, Miraya Takhtani, when Esha Deol Takhtani was contacted by the Mumbai Mirror, the second-time mommy had excitedly talked about her two daughters. Revealing how her second daughter, Miraya’s name is connected to their firstborn, Radhya’s name, Esha had stated, “When Lord Krishna worships Radha, it’s called Radhya, while Miraya means a devotee of Lord Krishna. Both the girls have that in common and I love how Radhya and Miraya sound together.” (Also Read: Neha Dhupia And Angad Bedi's 16-Month-Old Daughter Mehr Starts Walking, Doting Mommy Gives A Glimpse)

Share your idea of spending time amidst COVID-19 quarantine! 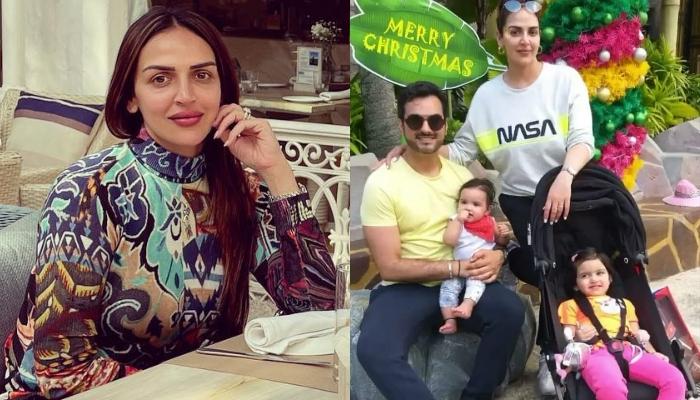 Bollywood actress, Esha Deol loves sharing glimpses of her happily ever after with her fans. Ever since she has embraced her motherhood journey, she loves spending time with her daughters, Radhya and Miraya. On the occasion of National Girl Child Day, the gorgeous mommy of two penned an adorable note