Esha Deol Wishes Her Brother-In-Law, Devesh Takhtani And His Wife Astha On Their Wedding Anniversary

Esha Deol Wishes Her Brother-In-Law, Devesh Takhtani And His Wife Astha On Their Wedding Anniversary

Bollywood actress, Esha Deol wished her brother-in-law, Devesh Takhtani and his wife, Astha Takhtani on their wedding anniversary with a stunning picture from their 'mehendi' ceremony. Take a look!

Everyone knows that Bollywood actress, Esha Deol Takhtani is a doting family member who never misses a chance to make every person of her family feel special on their important days. This time around, Esha posted a beautiful wish for her brother-in-law, Devesh Takhtani and his wife, Astha Jagwani Takhtani on their wedding anniversary with a stunning picture from their mehendi ceremony, proving she's the best bhabhi ever. However, other than that Esha is an exceptionally talented actress and had stunned everyone with her acting comeback in 2019 with her much-appreciated short film, Cakewalk. The actress had proved the mettle of her acting skills and had clearly shown that she still got a lot of magic within her. (Recommended Read: Janhvi Kapoor Reacts Like This To Khushi's Latest Picture, Their Social Media Banter Is Hilarious)

As for now, there are no details about Esha Deol Takhtani's next acting projects, as she's indulged in advertisement and events at the moment. In terms of her personal life with her husband, Bharat Takhtani, the doting wife shares romantic pictures and cutesy clips with him time and again on her social media handles that speaks volumes about their romantic camaraderie. On March 13, 2021, Bollywood actress, Esha Deol Takhtani took to her Instagram stories and shared a stunning picture of her brother-in-law, Devesh Takhtani with his wife, Astha Jagwani Takhtani from their mehendi ceremony. The couple looked stunning and simply out of this world in their respective outfits and brightest smiles while posing for the shutterbugs. While on one side, Astha looked breathtakingly beautiful in her Anamika Khanna lehenga and gorgeous Mehr jewellery. On the other side, Devesh stunned everyone with his pastel-coloured bandhgala and khakhi trousers. The doting bhabhi, Esha Deol penned a sweet wish atop the lovely picture, and it can be read as "Happy wedding anniversary to my lovely @asthajagwani @dtakhtani We love you so much! Stay blessed." Take a look: For the unversed, Esha Deol Takhtani shares a beautiful bond with her brother-in-law, Devesh Takhtani and time and again, we have seen glimpses of it through their vacation pictures and birthday wishes for each other. For instance, on December 19, 2019, Esha had taken to her IG handle and had shared an adorable selfie with her brother-in-law to wish him on his birthday. The devar-bhabhi duo had looked stunning in their respective outfits while posing for the camera in the picture. Along with the beautiful picture, Esha had penned a heartfelt note for Devesh, and it could be read as "Happy birthday to my brother @dtakhtani ! I love more than words can say .... to one of the nicest humans I know... stay blessed & stay cool." (Don't Miss: Ranveer Singh Shares A Selfie With His Wife, Deepika Padukone And His Fisherman Hat Is Simply Dope) Esha Deol Takhtani and her husband, Bharat Takhtani never skip a chance to shower their immense love and care on Devesh Takhtani and his wife, Astha Jagwani Takhtani. From seeing them going out together for dinner to attending events, the doting brothers, Bharat and Devesh are lucky to have Esha and Astha in their respective lives, as they're more like sisters than bhabhi-devrani. On February 18, 2019, when Esha had posted two stunning pictures, one with her devrani, Astha and the other one with her whole family. Both Esha and Astha had looked stunning in their respective outfits and could be seen having their arms around each other while seeing something away from the camera. Along with the pictures, Esha had written a caption in which she called Astha her 'sister'. Her note could be read as "Post #cakewalkpremier celebrations with #myfamily my stunning sister #inlaw who is more of a sister @asthajagwani and my #bro @dtakhtani #mom#dad #hubby @bharattakhtani3." (Also Read: Soha Ali Khan Gifts Her Daughter, Inaaya A Four-Legged Cutie And It's Not A Puppy, [Pictures Inside]) 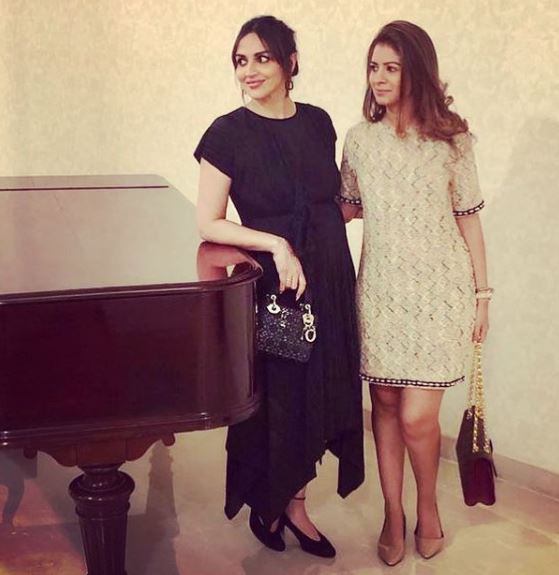