Despite a hectic schedule of promoting her debut book, 'Amma Mia', Esha Deol makes sure not to sideline her family, especially her two daughters, Radhya Takhtani and Miraya Takhtani.

Hema Malini and Dharmendra’s daughter, Esha Deol had made her Bollywood debut, following the footsteps of her star parents, in 2002 with the film, Koi Mere Dil Se Poochhe. But she garnered the desired fame in 2004 with Dhoom. And just like her star parents, Esha too, is dearly admired by her fans and with her sabbatical to nurture her kids, fans were curious to know when will they get to see her back on-screen. (Also Read: Shilpa Shetty Kundra's Daughter, Samisha Turns One-Month Old, The Actress Shares A Glimpse Of Her)

Married to a businessman, Bharat Takhtani, and a proud mother of two angels, Radhya Takhtani and Miraya Takhtani, Esha Deol is riding high on the personal front. But professionally too, Esha has taken a step towards a venture and is now an author of her first book, Amma Mia. Esha’s debut book, Amma Mia documents her "adventures" in motherhood and is a hands-on guide to take control of the child’s diet and making them love food.

Esha Deol And Bharat Twin With Daughters, Radhya And Miraya On Christmas, Share A Family Portrait With a hectic schedule of promoting her debut book, Amma Mia, Esha Deol makes sure not to sideline her family, especially her two daughters, Radhya Takhtani and Miraya Takhtani. On March 15, 2020, Esha spent her Sunday with her sister, Ahana Deol, brother-in-law, Vaibhav Vohra, hubby, Bharat Takhtani, nephew, Darien Vohra and daughters, Radhya and Miraya. Ahana and Esha posted glimpses of the same on their respective Instagram handles. While Esha posted a picture with her youngest, Miraya and captioned it as “Amma & Miu #sundayvibes #mirayatakhtani”, Ahana posted a #FamJam picture with everyone in the frame and wrote, “Sunday chilling sessions #famjam #crazybunch #talkingaboutmygeneration #minius.” 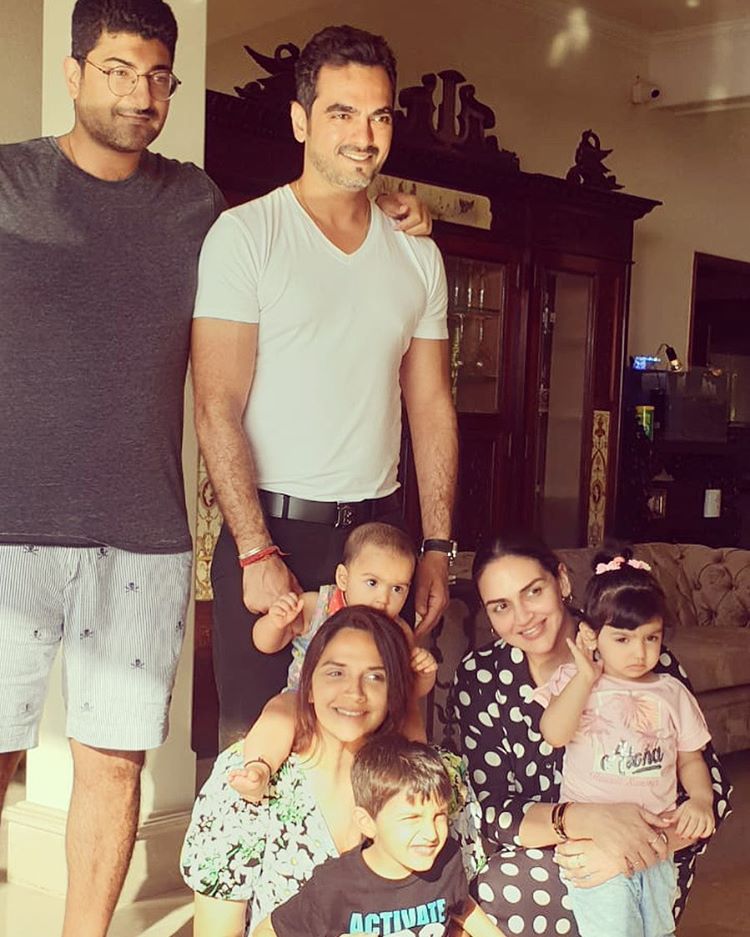 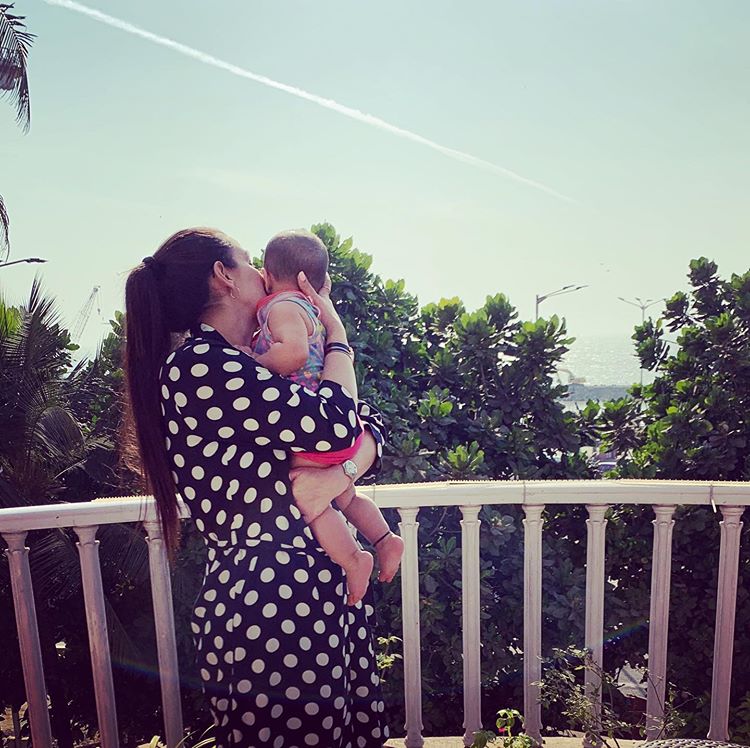 In an interview with the Hindustan Times, Esha Deol revealed how it is to be a working mother and how she tries to manage her kids and work. Esha stated, “I am not the kind of person who will sit and do nothing. I now do my work meetings at home as my daughters are my responsibility and I want to spend time with them.Radhya really enjoys being on sets.” Esha and her husband, Bharat Takhtani make sure that either parent is at home when the other is travelling for work, Esha continued, “We like our kids to wake up to either of us, if not both.” (Also Read: Kareena Kapoor Khan Credits Her Husband, Saif Ali Khan For Showing Her The Bigger Picture Of Films) Growing up around women has instilled a strong sense of independence in Esha Deol and gender equality comes naturally. Revealing that she wants to instill the same in her daughters, Radhya Takhtani and Miraya Takhtani, Esha shared, “Self-respect, dignity and grace are very important. You may look a certain way or come from a certain background but when you have these three qualities you stand apart from the crowd. That is something I have always followed and I would love to instil the same in my daughters.” 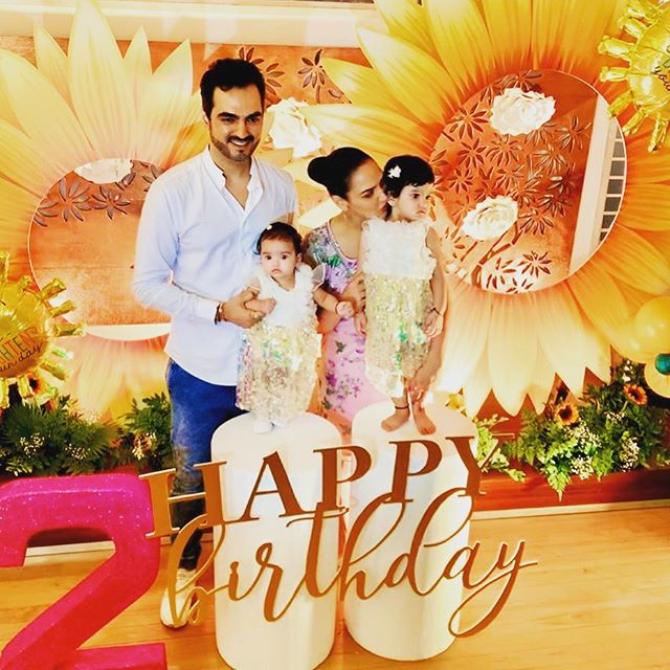 Esha Deol credits her mother, Hema Malini for the urge to fulfil one’s dreams even after motherhood as with her youngest daughter, Miraya Takhtani turning one soon, the 38-year-old star is raring her way back to the films. Esha remarked, “I definitely want to get back to acting, but I won’t reveal anything now. You will hear an announcement soon.” Esha continued, “My mother is full of good advice, but I feel the best one is that if you are working before marriage or are pursuing any passion, continue working and fulfil your dreams, and don’t give up your career and interests post marriage and kids. It’s important to allow your partner to work and fulfil her dreams. Don’t lose your identity after marriage or kids.” 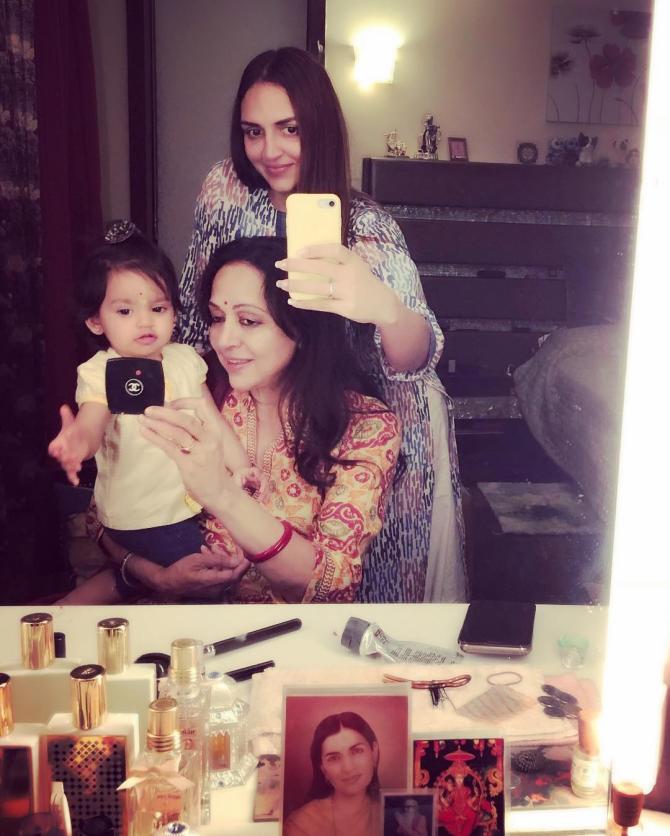 Esha Deol, the eldest daughter of Dharmendra and Hema Malini, prefers to keep her personal life private, but occasionally treats her fans with little sneak peeks into her family life, be it the drool-worthy moments with her husband, Bharat Takhtani and daughters, Radhya Takhtani and Miraya Takhtani or glimpses from the Deol and Takhtani functions and festival celebrations. Sharing a mirror-selfie of her daughter, Radhya and little one’s maasi, Ahana Deol, Esha had captioned her International Women's Day 2019 post as “My 2 most favourite girls in the world #mysister #mydaughter @a_tribe #radhyatakhtani on the #eve of #womansday.” (Also Read: Mahhi Vij Shares Her Daughter, Tara Jay Bhanushali's Video Of Calling Her 'Mumma' For The First Time) Much love to the Deols!