Harbhajan Singh took to his IG handle to share a glimpse of the celebration of his 40th birthday, with his wife, Geeta Basra and their little angel, Hinaya. Check out the pictures inside!

Over the decades, Indian cricket has witnessed a lot of exceptional cricketers. But there are some, who hold a special place in the hearts of cricket fanatics of this country. One such name is Harbhajan Singh, the man, who holds the record of the second-highest number of Test wickets by an off-spinner in the history of cricket. The sheer brilliance that Harbhajan Singh is, he had changed the fate of spin-bowling in Indian cricket, turns 40-years-old today. Scroll down to check out how did he celebrate his birthday! (Recommended Read: Gurmeet Choudhary Turns Hairstylist For His Wife, Debina Bonnerjee, The Latter Flaunts Her New Look)

Last year, on his birthday, we had spotted him twinning with his angel, Hinaya. Yes, Bhajji's darling wife, Geeta Basra had made the daddy-daughter duo twin in maroon ensembles and we couldn't stop gushing over the pictures! While the cricketer had worn a maroon shirt from designer, Piyush Dedhia, Hinaya's dress was custom-made by Parveen Basra. Geeta had captioned the pictures as "Twinning with Papa on his birthday. Hinaya's dress is extra special as it's made by my talented mum Parveen Basra! Bhajjis shirt by @piyush.dedhia. Thank you, Piyush for the lovely fabric so I could make something unique and memorable!"

Ram Charan Penned A Lovely Birthday Wish For His Darling Wife, Upasana Kamineni On Her Birthday

Karan Johar Thanks His Closest Friend, Manish Malhotra For The Special Gift On His 48th Birthday 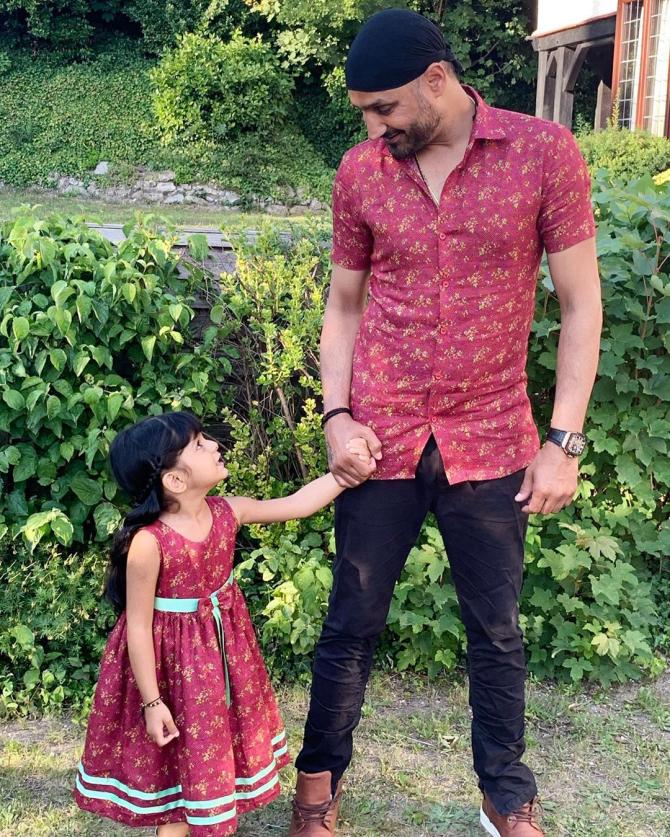 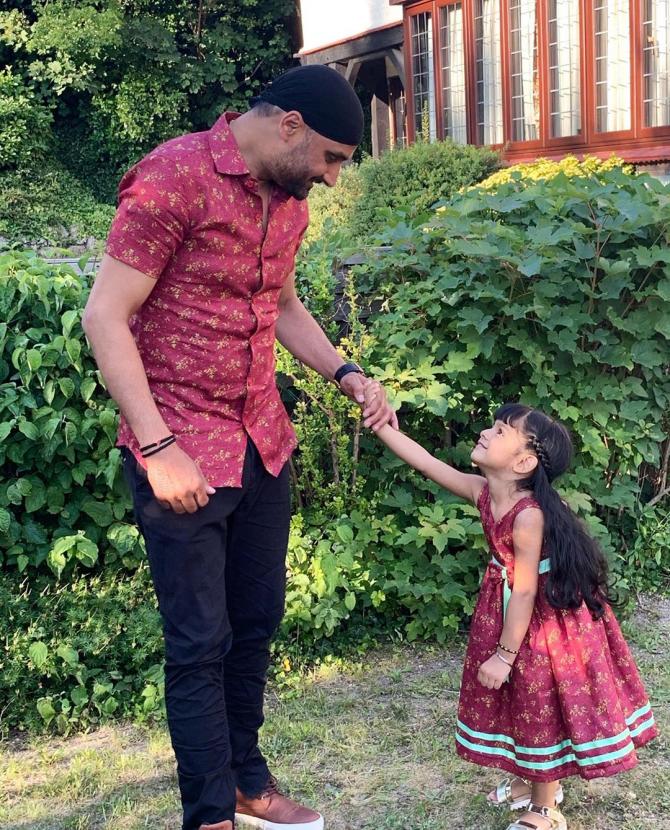 Harbhajan Singh took to his IG handle on July 4, 2020, to share glimpses of the celebration of his 40th birthday with his wife, Geeta Basra and their little angel, Hinaya. Bhajji can be seen looking dapper in a black shirt, while his wife, Geeta, looked gorgeous in an orange suit. Little Hinaya stole our hearts in a white dress. Fancy decorations, balloons and lights can be seen in the background in the pictures which tell us our Bhajji had a blast on his 40th birthday! He also put a sweet caption alongside the pictures which can be read as "Both made my 40th birthday the best ever.. love you @geetabasra @hinayaheerplaha. #grateful" followed by red heart emojis. Check out the pictures below: 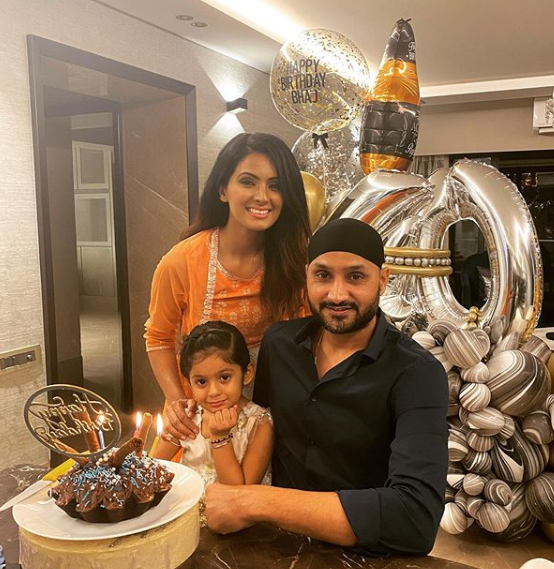 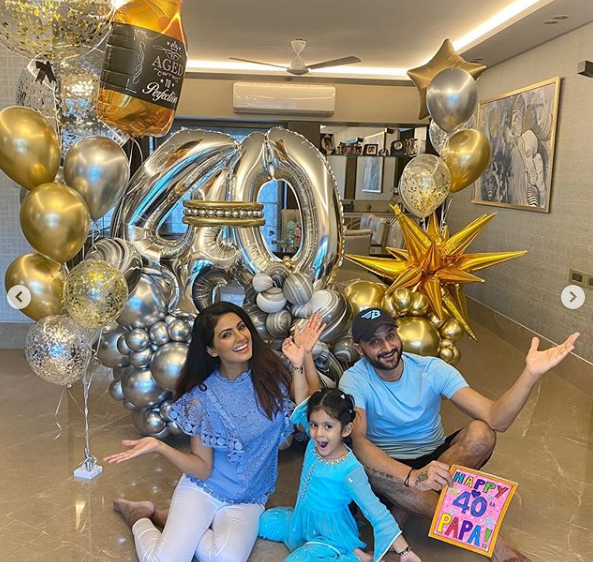 Harbhajan Singh is a doting father and his love and affection for his daughter is pretty evident. Once in a throwback interview with Sportskeeda.com, he had talked about how his little doll, Hinaya, is his top priority. He had stated, "I've been playing cricket for almost 18-19 years now. This (marriage and fatherhood) is happening to me for the first time. Now, it's all about family. Whatever I've achieved so far in life and in the future is for them. My family is my world." He had further added, "I haven't played (international) cricket in the last 8-9 months, but I can still get back to it. I can't be there for my daughter when she is growing up. That won't come back. My daughter is growing up and I want to live every moment of it." (You May Also Like: Sara Ali Khan Twinning With Her Mom, Amrita Singh In Matching Masks Is The New Lockdown Fashion) 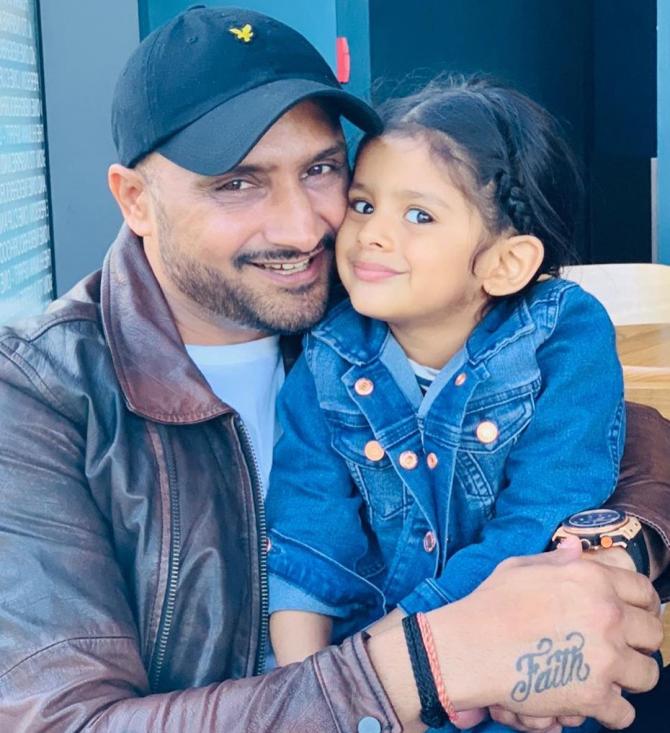 In another interview, Harbhajan had shared that there is no greater joy than being a father, "I have realised that there is nothing bigger in life. Whether you play 100 Tests, win the World Cup, get all the medals in the world. Nothing is bigger than this feeling. Your kids are your biggest medals. I am realising this now after becoming a father. Earlier, my friends used to say all this. Now I endorse it, 200 per cent. I am really proud to be a dad. I just want to thank the almighty for giving me this lovely diamond. My respect for females has increased a thousand times after having a daughter. We are what we are because of them." (Also Read: MS Dhoni and Sakshi Dhoni Complete 10-Years Of Marriage, The Latter Shares Some Unseen Pictures)

Ram Charan Penned A Lovely Birthday Wish For His Darling Wife, Upasana Kamineni On Her Birthday