The veteran actress, Hema Malini, remembered her late mother, Jaya Chakravarthy, and shared pictures from the beautiful time they had spent together. She also penned a heartmelting note for her.

The veteran actress, Hema Malini, never misses a chance to remember her late parents, V.S. Ramanujam Chakravarthy and Jaya Chakravarthy. Time and again, we have seen her sharing old monochrome or unseen pictures of her parents from her memory lane.

However, this time around, the Dream Girl of Indian cinema dropped a series of timeless pictures of her mother, along with a heartmelting note on her social media handle. The unseen pictures also surfaced the uncanny resemblance between Hema Malini and her mother, Jaya Chakravarthy.

Recommended Read: Ishaan Khatter And Ananya Panday Spotted At The Airport Together, Made Their Relationship Official On January 3, 2022, Hema Malini took to her Instagram handle and shared a series of pictures with her mother, late Jaya Chakravarthy, from the beautiful time they had spent together. The thread also featured some solo pictures of Jaya Chakravarthy from her younger days, and it showcased an unreal resemblance between her and her daughter, Hema Malini. Among all the pictures, it's the fourth one that melted our hearts in split seconds, as we can see the mother-daughter duo looking stunning in their respective attires. While Jaya can be seen donning a dark maroon-coloured saree, Hema looked gorgeous in a dark green-coloured saree. Along with these pictures, Hema penned a lovely note in the caption of her post, in which she called her mother 'my sheet anchor'. Her caption can be read as:

"Remembering my lovely mother, my sheet anchor who is still guiding me from above. She was easily the main strength of our family, a veritable power house who was respected by all in the industry. We love you Amma and miss you so much. #bestmother #rememberingmom #mothersblessings.” 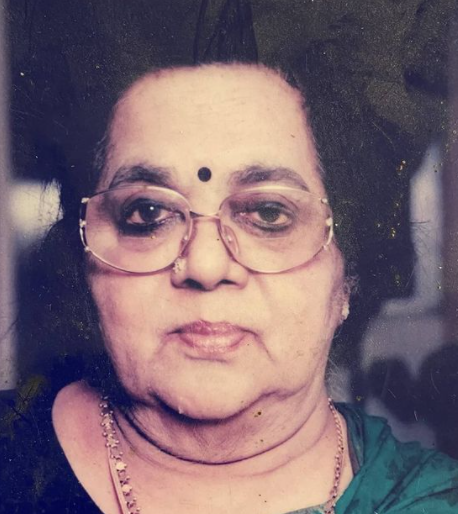 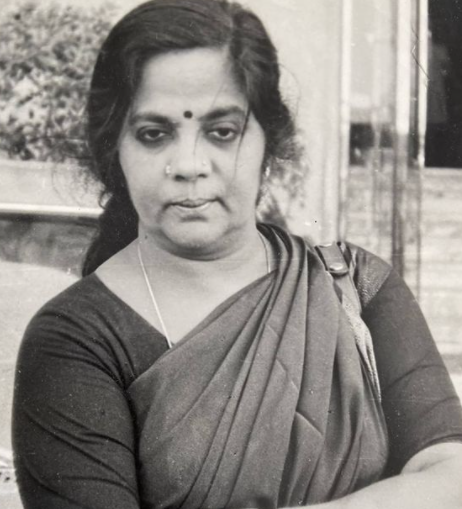 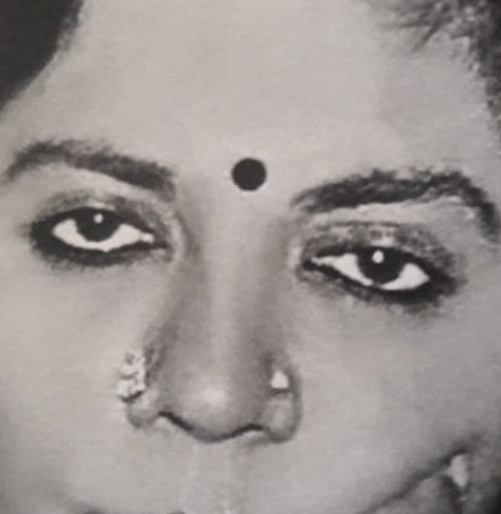 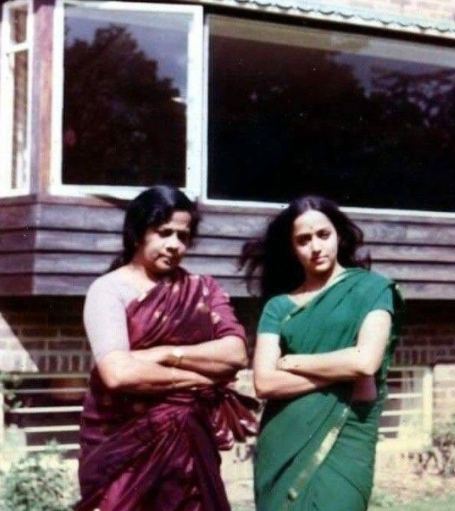 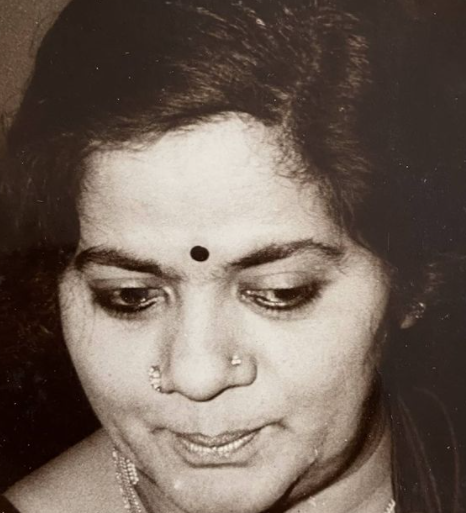 Hema Malini often remembers her mother, late Jaya Chakravarthy and had often delighted her massive fanbase with some surreal unseen pictures from their past. Last year Hema Malini had got emotional on her mother's death anniversary on January 26, 2021. The doting daughter had taken to her IG handle and had shared a priceless picture with her mother. Along with the photo, Hema had also penned a heartmelting note in the memory of her late mother that could be read as:

"My mother Smt Jaya Chakravarthy, affectionately called Mummy by all who knew her was an iconic figure in Mumbai, respected by everyone. She left us on this day 17 yrs ago. To me she was everything- she made me what I am & moulded my career. I feel her presence guiding me even today." 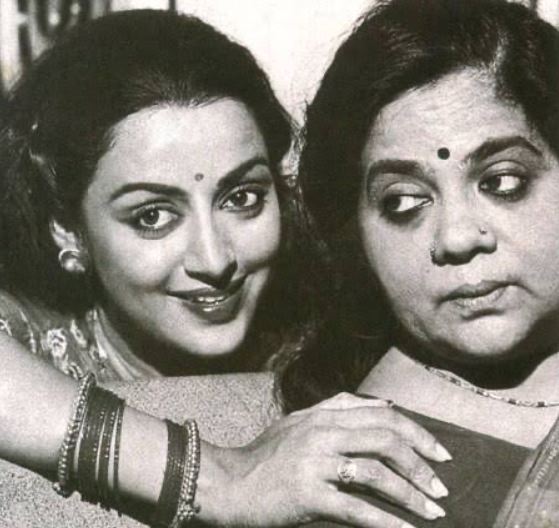 In May 2020, Esha Deol had posted a throwback picture with her grandmother, late Jaya Chakravarti and her mother, Hema Malini, in one frame. Esha had captioned her childhood picture with three generations in a frame as she had penned: On Mother's Day 2020, Hema Malini had posted an unseen monochromatic picture with her mother, Jaya Chakravarti. Sporting a traditional Bharatanatyam attire, Hema Malini had captioned the picture as:

"It is Mother's Day! A day for us to recall with love & gratitude all that our mothers have done for us. Also a day for us to celebrate our status as mothers & grandmothers & look back proudly at the years passed in bringing our kids. This is a treasured file photo of me & my mom." 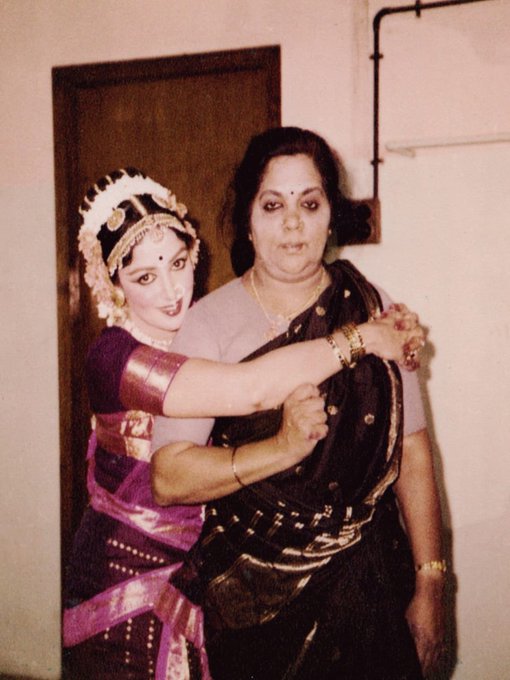 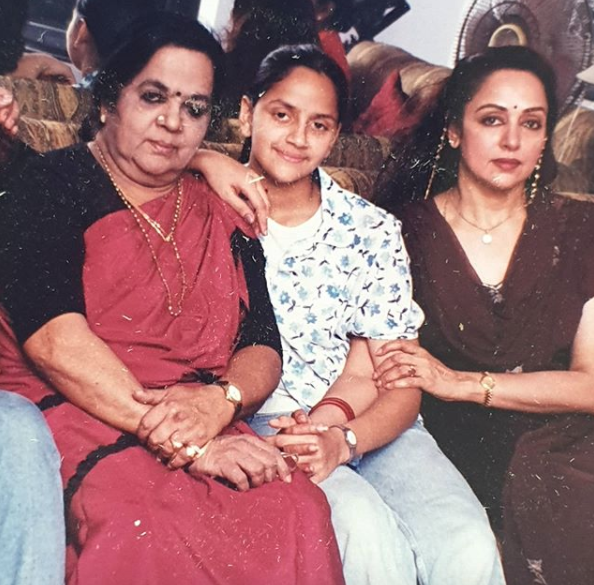 On the work front, Hema Malini was last seen in the film, Shimla Mirchi.