Don’t you look at celebrity couples and wonder how their lives are perfect fairytale romances? We are sure when you see them or read about them, you often wonder how they met and when did they know that they had found their soulmate, right? Well, many of the Bollywood celebs couples do have a love story that is as charming as the ones shown on-screen. Well, check out how the biggest heartthrobs of Hindi celluloid met their real-life sweethearts.

Recommended Read: 21 Most Famous And Yet Controversial Love Triangles Of Bollywood Shah Rukh and Gauri are one of the most romantic B-town couples who are very much in love and inseparable. Shah Rukh and Gauri first met at a friend’s party in 1984. It was love at first sight for the shy, 18-year-old, Shah Rukh. When he got the courage to ask Gauri for a dance, she turned him down saying that she is waiting for her boyfriend. Later he came to know that there was no boyfriend in the picture; she was there with her brother. He then called her up and said, “mujhe bhi apna bhai samjho.” (Consider me your brother too!). It was his wit and confidence that swept Gauri off her feet and started their adventurous romance. Hrithik and Sussanne's relationship might have hit a rough patch right now, but there was a time when you spoke of B-town’s romantic couples and their names were always on the lips. Their love story too was one that always made our hearts melt, and so was their first meeting. It was the first scene of Kaho Naa Pyar Hai turning into a reality, literally. Hrithik first saw Sussanne at a traffic signal in Mumbai, when their cars stopped side by side at a red light. The shy Hrithik knew this was the woman he was meant to spend his life with, and as they say,…rest is history!

Also Read: Sussanne Khan Finally Revealed That Why She Ended Her 13 Years Of Marriage With Hrithik Roshan 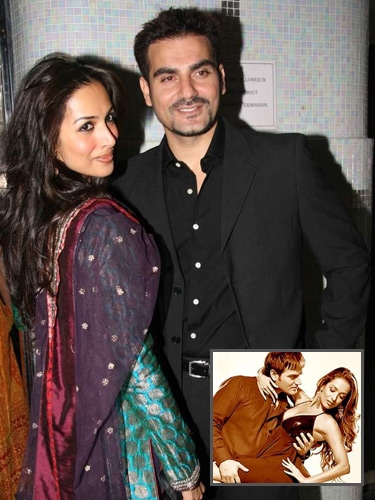 Malaika and Arbaaz started their relationship with a sizzling hot coffee ad, which ended up getting banned because it was too hot. The ad shows the couple with their limbs entwined around each other and the tagline reads, “Real pleasure can’t come in an instant”. It was during that ad that these two got to know each other, became friends, and afterwards started dating. Here is how Malaika defines her feelings for Arbaaz:

“At the back of my mind, I always knew that this was the guy I wanted to spend the rest of my life with.”

They got married five years later but now, they're divorced.

Don't Miss: After Divorcing Malaika Arora, Arbaaz Is All Set To Tie The Knot Again? 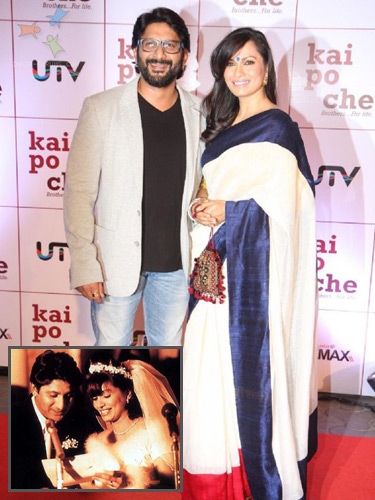 Arshad Warsi was already a well-established artist and had his own dance troupe, when he was invited to judge a dance competition in Maria’s college, and she was a participant in it. Arshad saw her and it was love at first sight for him. Later, he offered her a place in his dance group, an invitation that she refused initially. They met a few more times through common friends. Although she loved him, she refused to accept it until the day Arshad mixed beer in her drink. In her intoxicated state, she confessed her love for him. On February 14, 1999, the two tied the knot! 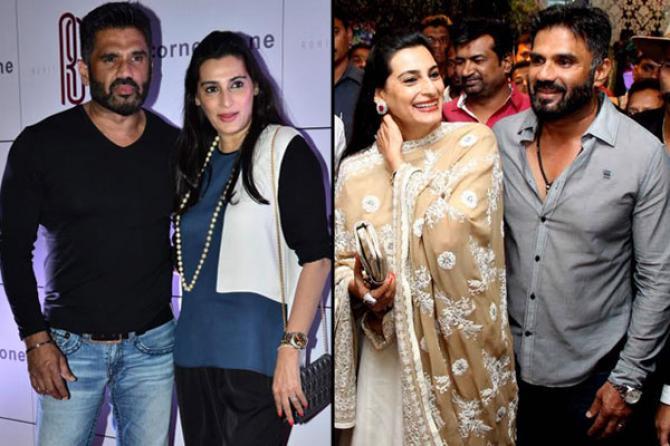 Suneil Shetty first bumped into Mana at a pastry shop. It was Pastry Palace, a place that Suneil used to often visit with his friends. When he saw Mana there one evening, his life truly changed. Later, they met at a party. Mana was just 17 then. After that, the couple dated each other for nine long years before tying the knot in 1991. This couple overcame the religious barrier, as Suneil is a Hindu and Mana is a Muslim.

Also Read: Together For 30 Yrs Now, Sunil And Mana Shetty Waited For 9 Yrs To Get Married 'Coz Of This Reason 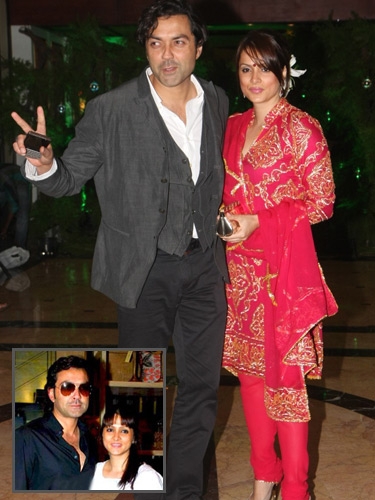 You can surely run into your soulmate anytime and anywhere- be it a pastry shop, traffic signal or an Italian restaurant. Yes, the last one is the place where young Deol, Bobby, met his better half, Tanya. It was at Mumbai’s Trattoria, an Italian restaurant where he first saw the girl of his dreams. He was smitten by her there and then. He spent days calling her up for a date to which she finally agreed. And, one thing led to another and they become one forever! 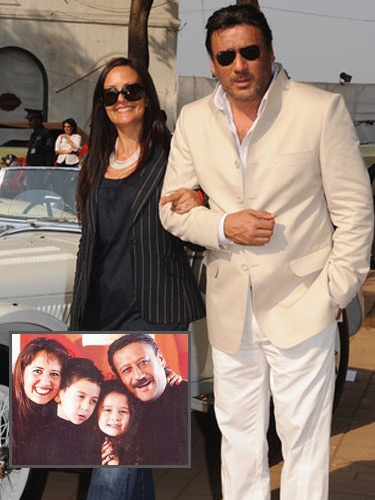 Ayesha and Jackie first met at a record store, when she was just in school, and he was not a 'Hero' as of yet. Jackie walked up to her, and in his sexy voice, he offered to help her in choosing a record. It was an instant attraction, and that young girl knew she had found her dream man. After this, the two met again, dated and got married in 1987. 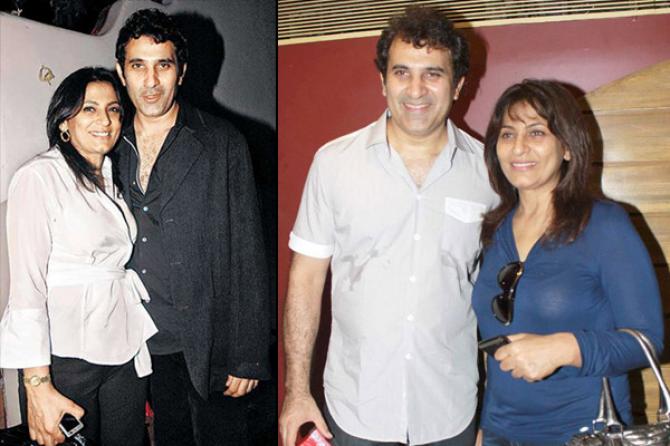 These two met at a common friend’s party and hit off instantly. In Parmeet’s own words:

“For me, it was an attraction at first sight. Archana bowled me over with her beauty and grace. It was Archana's truthful nature and complete transparency of thought that attracted me.”

When they first met, Archana was in a rebound relationship. But as they say- whatever has to happen, will happen. Even under such tense circumstances, she started dating Parmeet and the rest is history. The beautiful understanding and chemistry between the two were the reason they decided to get married. After 4 years of live-in relationship, they tied the knot on June 30, 1992.

Check This Out: Archana Had Lost Faith In Love After A Failed Marriage, But Parmeet Brought It Back In Her Life Their story is a true love at first sight and very cutely old school. Fawad first saw Sadaf in Lahore in his school, which Sadaf also used to attend but in the girl’s branch. He would often outside the girl’s branch to get her one glimpse.

He never had the courage to ask her out. So, they started chatting on texts. Then, one day he met with a brutal accident and his friends told him that Sadaf was looking for him. That’s when it hit him that she might be interested. After mustering up all courage, he asked her out and after a year of seeing each other, he proposed her. Breaking the shackles of family restrictions, the couple finally married on November 12, 2005, in Karachi, right after their graduation. What started as a stare, became souls later.

Check Out: The Charming Love Story Of Heartthrob Fawad Khan And Sadaf Khan That Will Touch Your Heart 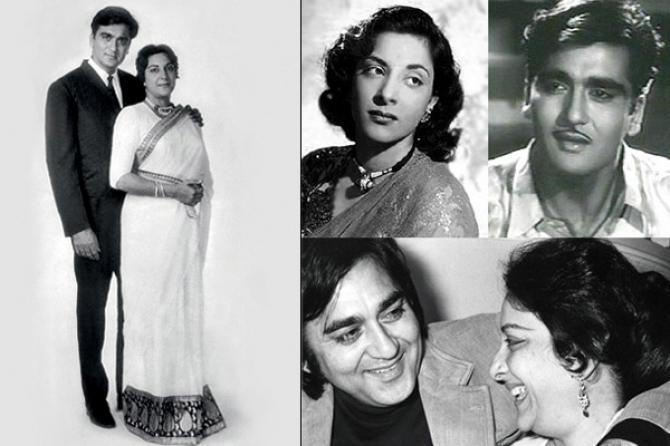 The veteran actors of the Hindi film industry, Sunil Dutt and Nargis, didn’t really hit off instantly, for the obvious reason of Nargis being a star already when Sunil first met her. However, it certainly was love at first sight from Sunil Dutt. Despite the rumours of Raj Kapoor and Nargis’ alleged affair floating around, Sunil’s attraction for her didn’t fade. It was during Mehboob Khan’s movie, Mother India, that Sunil Dutt and Nargis came closer.

It was reported that once there was fire on the sets of Mother India, and Nargis got stuck amidst the blazing flames. Sunil, like a true hero, saved her without caring about his life. He was badly burnt, and Nargis took good care of him, day and night. That’s when they both started feeling for each other. Sunil and Nargis got married secretly in 1958 and then announced the news to their closed ones. Amazing, isn’t it? One sight, one feeling of love and eventually life partners!

So, these were the real love at first sight stories in Bollywood for you. No matter how they met, you cannot help thinking that these couples were meant for each other. Their destinies just brought them together through many twisted roads! Who’s your favourite couple? Let us know in the comments section below.

Next Read: 12 Bollywood Actresses Who Were Already Married Before They Entered Bollywood