The world will witness one of teh most astounding weddings of the century! Business magnate, Mukesh Ambani's only daughter, Isha Ambani is getting married to her childhood friend and now soon-to-be-hubby, Mukesh Ambani in a traditional Gujarati wedding and we can't keep calm! Shutterbugs have already stationed themselves outside the Ambani residence and every possible information that we are getting about them, is making us more curious to find out what's happening inside. While we hope to share updates with you on what's happening inside as well, meanwhile, let us begin with what's happening on the outside! (Do Read: Raghu Ram And Natalie's Pre-Wedding Ceremonies Begin With Mehendi And Haldi On The Beach-Side In Goa)

Isha Ambani and Anand Piramal's marriage will be a dusk-wedding and hence, the celebrations and taam-jhaam is going on in its full swing! Some recent pictures of the Ambani brothers, Akash and Anant, making their entry into their sister's wedding by riding on horses will give you some major shaadi-feels! Here are a few pictures that of the brothers that are creating a storm on the internet and making everyone say, "Entry ho toh aisi!"

Isha Ambani Reveals The Reason Why Hubby Anand Piramal Reminds Her Of Her Father, Mukesh Ambani 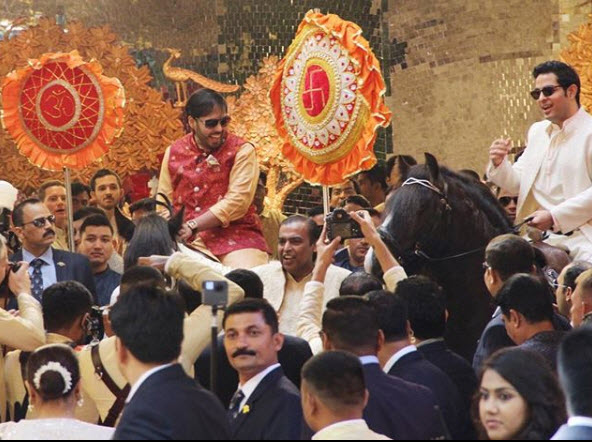 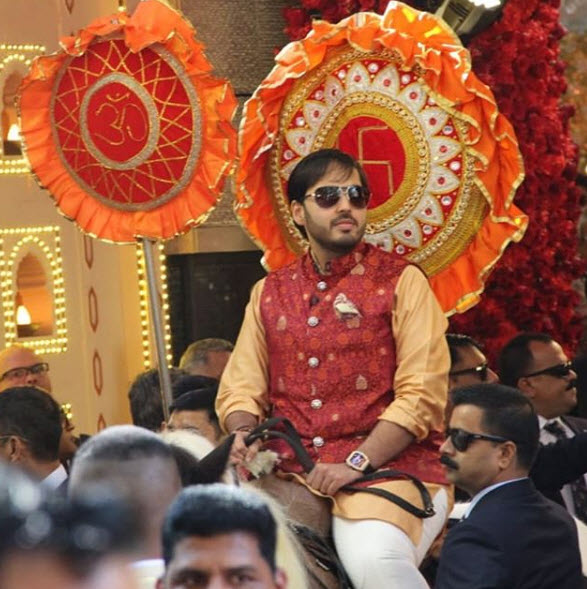 Ensuring that Isha’s wedding remains in her and her guests’ heart forever, the Ambanis have ensured that there is no glitch in the celebrations. Her pre-wedding festivities were celebrated with great pomp and show in Udaipur, post which the entire families and guests have flown into Mumbai, wherein Isha is getting married today. Here’s are a few pictures and videos of how beautifully has her home, Antilia been decorated:

Coming back to Isha’s pre-wedding festivities, we have given you every possible insiders from the celebrations. But this is something which will melt your heart away! In one of the segments at the pre-wedding festivities, Mukesh Ambani is seen holding the hands of his wife, Nita Ambani tightly, and going all emotional as he retrospects the time when his friends talked about giving away Isha,  and today, he is actually doing so. Checkout the video here:

That’s not all. Even at Isha Ambani’s engagement bash, her father, Mukesh Ambani had delivered an emotional speech. He began the speech by saying that errors are allowed in speeches that day, thus referring to his very sad thought of giving away his daughter. He had further continued by saying, “The last weekend, thanks to our dear Isha, has been a whirlwind and a surprise for all of us and we are still recovering from it." Even Isha’s granny, Kokilaben had then given a speech in Gujarati and revealed a very cute secret from Isha’s childhood. She had then stated, “My dear Isha, I would like to say it from my heart, you were the favourite for me and your papa. When Isha was six years old her papa used to see her face first and only then used to have tea." Here are the two videos: (Must Read: Kapil Sharma Singing 'Boliya' On His Jaggo Night Is Every Excited Punjabi Munda In His Wedding)

Did that make you go all ‘awww’? It totally did for us! By the way, Isha’s pre-wedding festivities had kickstarted from December 07, 2018 when her stylists and people belonging to the glamour world had started flying in for the pre-wedding at Udaipur. With the celebrations spread over a period of almost one week, have you ever calculated how much the Ambanis must be spending for their beti ki shaadi? Get ready for the shock of your life, while we reveal the total expenditure of the Ambanis! Believe it or not, as per a Bloomberg report, the family of Richie Rich’s are spending around $15 million, which estimates upto a whopping amount of Rs 70 crore for the wedding!

The Ambanis have ensured that there is no fallback on the mehmaano ki khaatirdaari! To give you all a flashback of all the extravaganza in a gist, that the Ambanis did, close to 40 chartered flights have been scheduled for its availability for the wedding. Apart from the flights, the Ambanis and Piramals had booked all the five-star hotels of the city (Udaipur for the pre-wedding) and over a thousand luxurious cars (Jaguars, Porches, Mercedes, Audis and BMWs) will be made available at their guest's disposal! After the pre-wedding festivities, the entire troupe of families flew back to Mumbai, where their wedding is all set to take place at the Ambani household in Antilia today, on December 12, 2018.

Not just the Ambanis, but the Piramals are also not left behind when it comes to riches. As all of you already know that Isha puts up with her parents in the 27-storey Antilia in Mumbai, which is also considered the second-most expensive private property after Buckingham Palace. Reports have it that the Piramals have gifted their bahu and son, a Rs 450 crore five-storey sea-facing bungalow in Worli! The couple will reportedly move in there after their wedding. So dreamy, isn’t it? (Also Checkout! Arjun Kapoor Spotted Leaving Rumoured Girlfriend Malaika Arora's Residence, Pictures Inside) Isha and Anand, we wish you all the very best and a lifetime of togetherness and happiness!