After a filmy style proposal, wherein Anand Piramal went down on his knees and asked Isha Ambani to be his forever, the lovebirds had a grand three-day engagement bash at Lake Como, Italy in August 2018. A few months later in October, Ambanis and Piramals made an official announcement of their beloved kids, Isha and Anand’s December wedding. Isha and Anand will be taking their wedding vows on December 12, 2018. (Also Read: Isha Ambani And Anand Piramal's Pre-Wedding Celebrations Were A Hub For Hilarious Memes)

Just a day left for the grandest wedding of the year, Isha Ambani’s patriarch’s home, the 27-story Antilia palace in Mumbai has been decorated with lights and flowers, and we must say, it is a sight to behold. The wedding will take place at the Ambani residence and Isha and Anand will become each other’s forever in this beautiful mansion. Take a look:

Anand Piramal Has Arrived At Antilia With 'Band Baaja Baaraat', Ambanis All Set To Welcome The Dulha

Mukesh And Nita Ambani, Shloka Mehta And Anant Ambani All Dance Together On Isha's Sangeet

Isha Ambani and Anand Piramal’s pre-wedding festivities began on December 7 and went on till December 9. On December 7, the Ambani-Piramal clan hosted an ‘Anna Seva’, wherein they are feeding 5100 people, three times a day till December 10. An official statement about the same could be read as, “As a mark of respect and gratitude to the city of Udaipur, and to seek their blessings for the upcoming wedding of their daughter, the family has commenced a special “Anna Seva” - taking up the auspicious task of feeding 5100 people (majority of them with special abilities) three times everyday from 7th to 10th December, to coincide with the pre-wedding functions of Isha Ambani and Anand Piramal on 8th & 9th December.”

It further stated, “Family members, including Mukesh and Nita Ambani, Ajay and Swati Piramal, Isha and Anand were present at this Anna Seva function, serving people and interacting with them. The Anna Seva functions will continue for four days, from 7th to 10th December and will be performed three times a day at the Narayan Seva Sansthan, Udaipur. In addition, the pre-wedding festivities will also see the setting up of a specially curated exhibit called the Swadesh Bazaar that will showcase 108 traditional Indian Crafts and art forms from all different regions of the country for the national and international guests. Presenting the art will be master craftsmen and craftswomen themselves, who are keeping these traditional arts alive. Creating an interesting experience as also an immersion into India’s cultural heritage. Swadesh Bazaar is a unique concept to encourage the craftsmanship of traditional Indian artisans, especially for a lot of indigenous crafts that need conservation and revival and have been supported by Reliance Foundation over the years. The Foundation aims to broaden and deepen its support to the goals of Swadesh Bazaar on a bigger and more sustainable scale in future.” 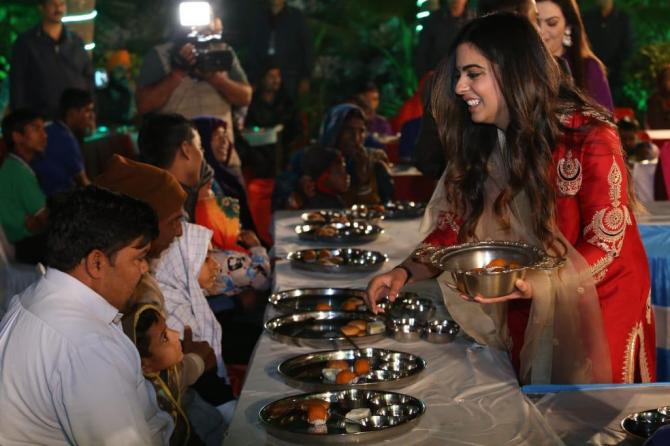 The statement concluded with, “From the rich Kanjeevaram, exclusive Patola, intricate Chikankari to fine Bandhani, exhibits cover over 30 types of textiles and weaves. Depicting folktales and local legends, artists will showcase ancient painting forms like Gond, Madhubani, Phad, Warli and Thangka. Weavers, potters and sculptures from all around the country will make this a mega-celebration of art and culture. This unique exhibit has not just provided livelihoods to thousands of such artisans, but also giving an opportunity to showcase their rare works from every nook and corner of India, for people’s interest, appreciation and support.” (Also Read: Abhishek Bachchan's Ex Karisma Kapoor And Wife Aishwarya Rai Danced Together At Isha-Anand's Sangeet) 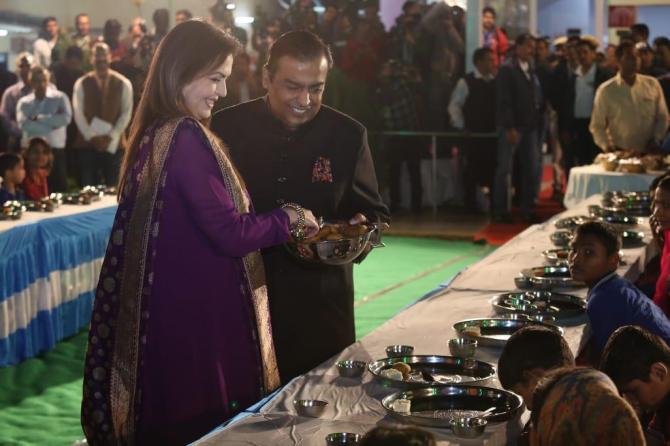 On December 9, 2018, they also organised a Swadesh Bazaar, which is an initiative of the Reliance Foundation, showcasing “108 traditional Indian Crafts and art forms from all different regions of the country for the national and international guests”, thus keeping Indian art crafts alive. The bride-to-be Isha Ambani, along with her mommy, Nita Ambani, former First Lady of US, Hillary Clinton and Indian cricketer, Sachin Tendulkar and his wife, Anjali Tendulkar, visited Swadesh Bazaar. 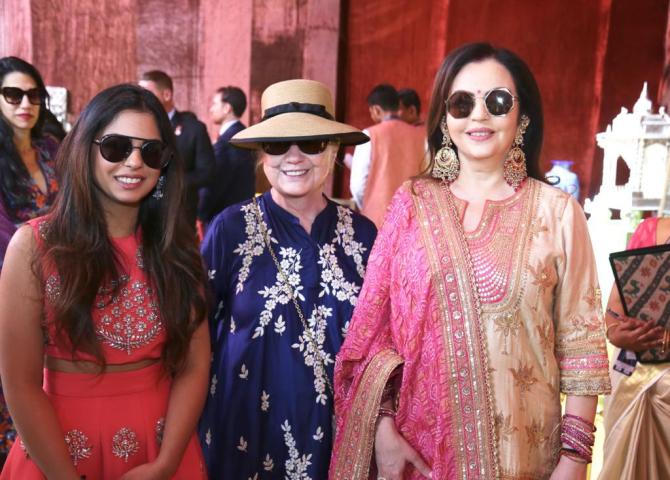 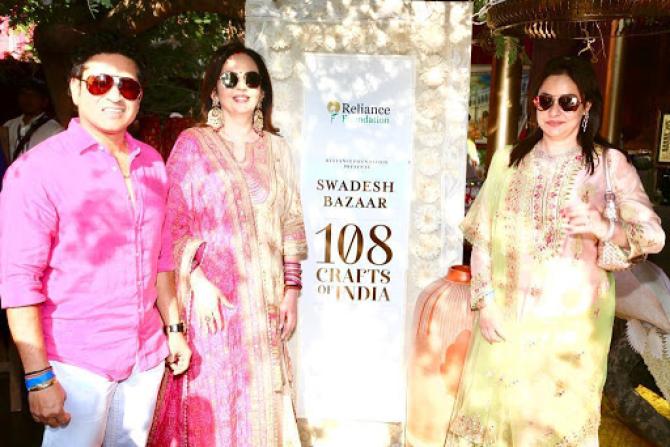 On December 10, 2018, Isha Ambani and Anand Piramal had a dhamakedar sangeet ceremony with VIPs and VVIPs from across the world, in attendance. From Priyanka Chopra-Nick Jonas, Siddharth Roy Kapur-Vidya Balan Anil Kapoor-Sunita Kapoor, David Dhawan-Karuna Dhawan to Karan Johar, Varun Dhawan-Natasha Dalal, Abhishek Bachchan-Aishwarya Rai Bachchan, Deepika Padukone-Ranveer Singh, Shah Rukh Khan-Gauri Khan, Salman Khan, Raveena Tandon, Akshay Kumar, Sakshi Singh Dhoni-Ziva Dhoni, Manish Malhotra, former first lady of the United States of America, Hillary Clinton, amongst other made it to the 'City of Lakes', and made the night worth remembering for the soon-to-be-married couple. (Also Read: Isha Ambani And Anand Piramal Can't Take Their Eyes Off Each Other In This Romantic Dance Number)

Stay tuned with us for updates on Isha Ambani and Anand Piramal’s wedding!

Anand Piramal Has Arrived At Antilia With 'Band Baaja Baaraat', Ambanis All Set To Welcome The Dulha