Karan Kundrra met his girlfriend, Tejasswi Prakash at his friend's home and gave her a grand welcome by performing 'aarti' for her.

Inside the Bigg Boss 15 house, we had witnessed a love story that had shown every trait that true love requires. Yes, we are talking about the love story of Karan Kundrra and Tejasswi Prakash, which is blooming even outside the reality show. From unconditional support to a pinch of jealousy, Karan and Tejasswi’s bond had faced everything, and they had stood strong with each other. Even outside the house, we are in a treat of some adorable ‘Tejran’ (as fondly called by their fans) moments every day. This time, Karan surpassed the level of being a perfect boyfriend as he welcomed Tejasswi at his friend’s home with aarti.

Karan Kundrra and Tejasswi Prakash can't live without each other and it is quite evident. After Bigg Boss 15, Karan Kundrra had taken to his IG stories and had shared a cutesy video, where we could see him standing outside Tejasswi's house as she was standing on her balcony. The two were seen having a mushy conversation, and their happiness was visible on their face. As we had witnessed the lovebirds' 'Romeo-Juliet' moment, it had reminded us of old school romance.

As Tejasswi Prakash has been shooting for Naagin 6, her boyfriend, Karan Kundrra, is often spotted picking her up from the sets. On the night of February 10, 2022, Karan reunited with his friends, Jessica Khurana and Omi Singh, at her home. As Tejasswi joined them, Jessica welcomed her with a puja ki thali and tika, leaving her amused. Later, Karan also grabbed the puja ki thaali and performed aarti for Tejasswi. He also kissed her cheeks and gave her a bear hug as she could not help but blush at her boyfriend’s sweet gesture.

After Bigg Boss 15 finale, on January 31, 2022, Karan Kundrra had taken to his IG stories and had dropped a cutesy selfie with his girlfriend, Tejasswi Prakash. While Karan could be seen donning a blue-coloured printed shirt, Tejasswi had looked gorgeous in a vibrant green T-shirt and had melted our hearts with her priceless smile. In the second picture, Tejasswi had posed to the camera with a quirky expression as she had received a grand welcome from Karan and her loved ones at her home.

Recommended Read: Rakhi Sawant Says She And Ritesh Are Just 'Good Friends', Talks About The Future Of Their Marriage 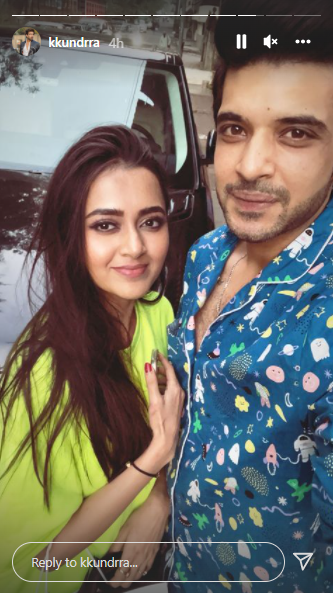 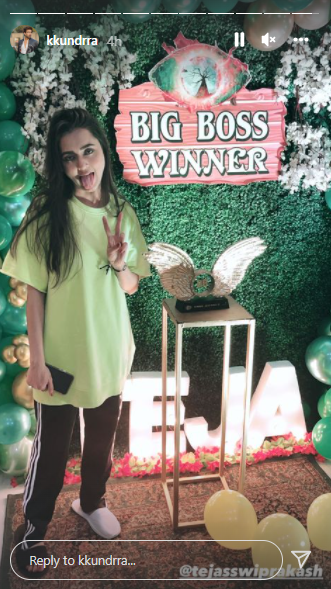 For the past few days, reports are doing the rounds that Karan is not allowing Tejasswi to do intimate or kissing scenes on-screen. Addressing such comments, the actress had issued a statement mentioning that Karan is quite professional and supportive about her work and would never interfere in her work decisions. The statement could be read as:

"Over the years I have never really had to do such scenes on screen for any of my shows, and even if I have to do something of that sort it will only be when the script requires me to go in that direction. Coming to Karan, he has been in this industry long enough to know that when work calls for a requirement it is important. Karan is very professional and supportive and would never interfere in work decisions related to me." We always go ‘aww’ seeing Karan Kundrra and Tejasswi Prakash’s love for each other!

Tejasswi Prakash Thinks Her Chemistry With BF, Karan Kundrra 'Is Fire', Reveals How Supportive He Is 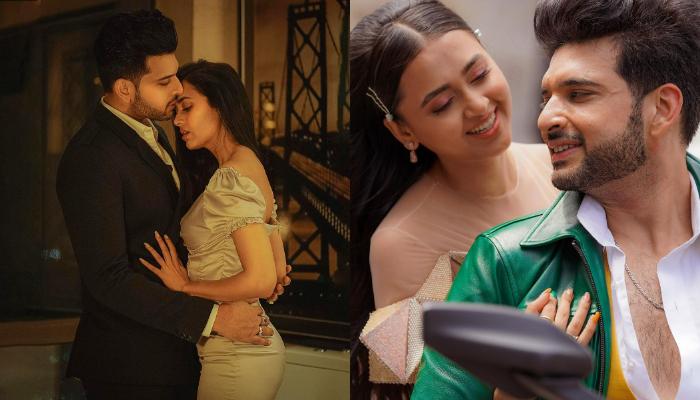 Love can happen anytime and anywhere. Television actors, Tejasswi Prakash and Karan Kundrra found love and comfort in each other's arms during their stay at Bigg Boss 15's house. Bigg Boss is one of the most contentious reality shows, and thousands of people follow it to know the inner controversies.