Ever since Sara Ali Khan appeared on Koffee With Karan season 6 with her abba, Saif Ali Khan, and made a confession of wanting to date Pyaar Ka Punchnama fame, Kartik Aaryan, the possibility of a brewing romance between them became the talk of the town. The alleged love story of Kartik and Sara didn't stop here. In an award show, the video of Ranveer Singh playing Cupid to B-town’s two young actors and introducing them to each other went viral for obvious reasons. To the proposal of ‘coffee’, Kartik had said, "Main coffee peena chahunga." (Also Read: Ranveer Singh Made Sara Ali Khan Meet Her Crush Kartik Aaryan, Did She Ask Him For A Date? [Video])

Much has been said and written about the brewing romance of Kartik Aaryan and Sara Ali Khan, however, the former had remained tight-lipped about his alleged romantic link-ups with Pati Patni Aur Who co-star, Ananya Panday and self-proclaimed lover, Sara Ali Khan. When Karan Johar asked Kartik Aaryan, "An exciting thing that happened Kartik is Sara Ali Khan came on my couch and said that she wanted to date you. What is the follow-up on that? What's the status? Are you interested in Sara Ali Khan?", Kriti interrupted, "Have you sent her your address?"

Ananya Panday Feels That Though It Is Rumoured BF, Kartik Aaryan's Birthday But His Focus Is On Her

To which, Kartik sat there with a blushing look and replied, “So, what I'm doing is, sir, I'm just trying to, you know, earn more and more money right now. Saif (Ali Khan) sir said, 'Does he have the money?' So, I'm just..." Karan probed, “And, you clearly don't have the money that can match the Prince of Pataudi.” Kartik answered, “I don't know. She is a princess. So, you know, to ask her out on a date, you know, I would require a certain bank balance.”

To give you a recap, when Sara and Saif appeared on Koffee With Karan, Karan asked the latter what he would ask from Sara’s prospective boyfriend. To which, the Sacred Games actor had replied, “Political views, drugs." And Karan intervened and said, “Money would be a nice question to ask. I would ask that." Saif had jokingly said to it, “Got cash? Take her". Later when Sara admitted that she wants to marry Ranbir Kapoor and date Kartik Aaryan, Saif had instinctively asked, "Does he have the money? Got money, take her!"

So, when Karan Johar further prodded Kartik, “So, that's why you asked Ananya Panday out on a date and not Sara Ali Khan?”, to which he said, “I never asked her out.” Karan further elaborated, “You went for dinner with Ananya Panday but you kind of annulled Sara's declaration of romance on my couch. You went out to see a movie with Shraddha (Kapoor), you went out for dinner with Ananya and you're also messaging Sara. So, is there anyone you're really…” Kartik reverted, “I'm not messaging Sara.” 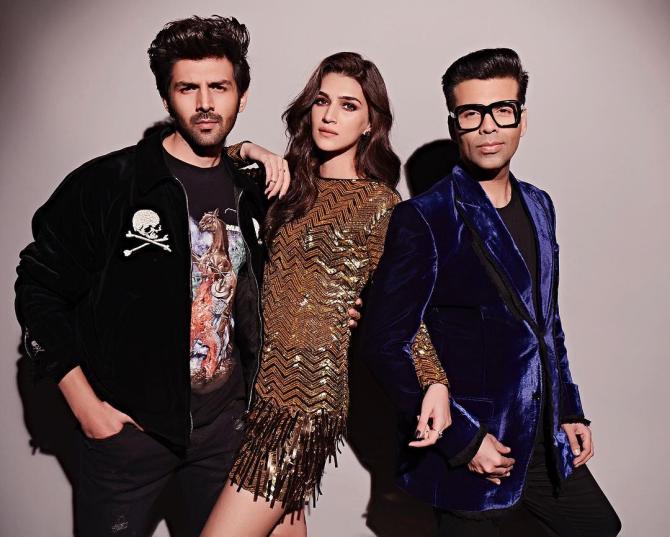 Karan again raised the topic of Kartik and Sara’s ‘romance’ when the Sonu Ke Titu Ki Sweety actor shared, “People should be open about their relationships”. To which, Karan asked him, “Are you open about yours. I really want to know. So sweetly she (Sara) came on the couch and said this.” Kartik replied, “Sir, I'm trying to earn money.” Karan probed him, “Just for her?” To which, Kartik said, “Just for her. The moment my bank balance is there, I'll ask her out." Karan asked him again if he is dating anyone, “But, you have already asked Ananya out. So, you do not seriously want to date any of them? You're not dating anyone?”, Kartik denied and said, “I haven't asked Ananya out. I'm not dating anyone.” (Also Read: Sara Ali Khan Has An Unmissable Reaction On Crush, Kartik Aaryan And Ananya Panday's Dating Rumours)

During the Rapid Fire segment, Kriti Sanon was asked whose wardrobe would she like to stay away from and the Bareilly Ki Barfi actress in no time took Sara's name. While Karan agreed with her saying, "Yeah, she is wearing some really strange clothes," Kartik objected to her answer. He surprisingly asked Kriti, "You don't like her wardrobe?" When Karan and Kriti pulled his leg and asked whether he likes Sara's wardrobe, he replied, "I love her clothes. I love her sense of style." When Kriti further asked what else does he love about her, Kartik said, "The way she is". 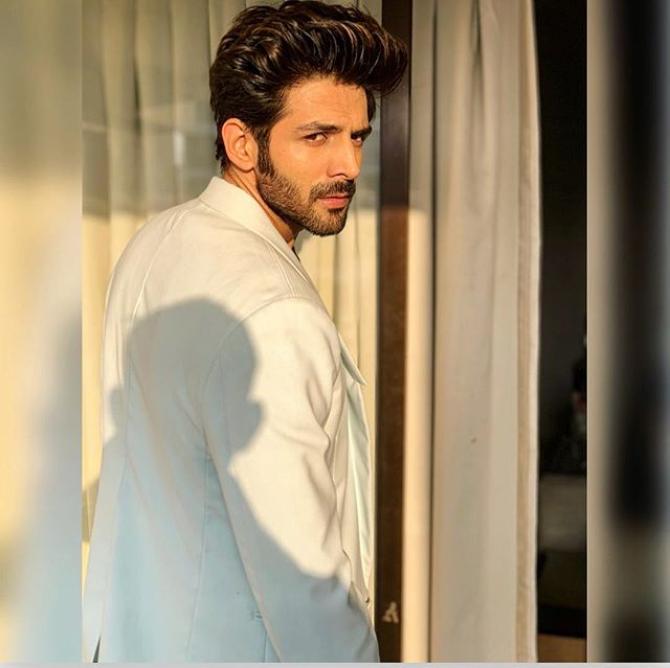 During Kartik Aaryan’s Rapid Fire round, Karan asked him to choose among Sara Ali Khan, Ananya Panday and Jahnvi Kapoor for bae, play and slay. Kartik replied, "I'll play with Ananya and Janhvi. Bae, Sara." In the next question, he was asked, "Sara or Janhvi - the brighter future?" To which Kartik replied, "Sir, you know the answer. Sara". During a recent Twitter interaction, there happened a new twist on the Kartik-Sara-Ananya saga, when a user asked Kartik which 'newbie' among Sara Ali Khan and Ananya Panday was his favourite. The Pyaar Ka Punchnama debutant left a somewhat cryptic reply, "Jinka main fav hoon (whoever considers me their favourite)." 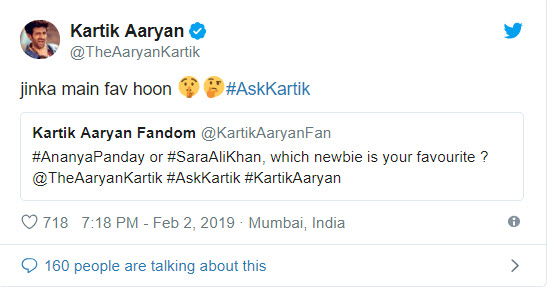 In an interview with IANS, Kartik talked down link-up speculations with Ananya after being spotted together on multiple occasions, dismissing them as mere 'rumours'. " Rumour toh rumour hai na (a rumour is just a rumour, is it not)? It is just random talk. I look forward to shooting for the film with Ananya. I’m in a relationship with my work." 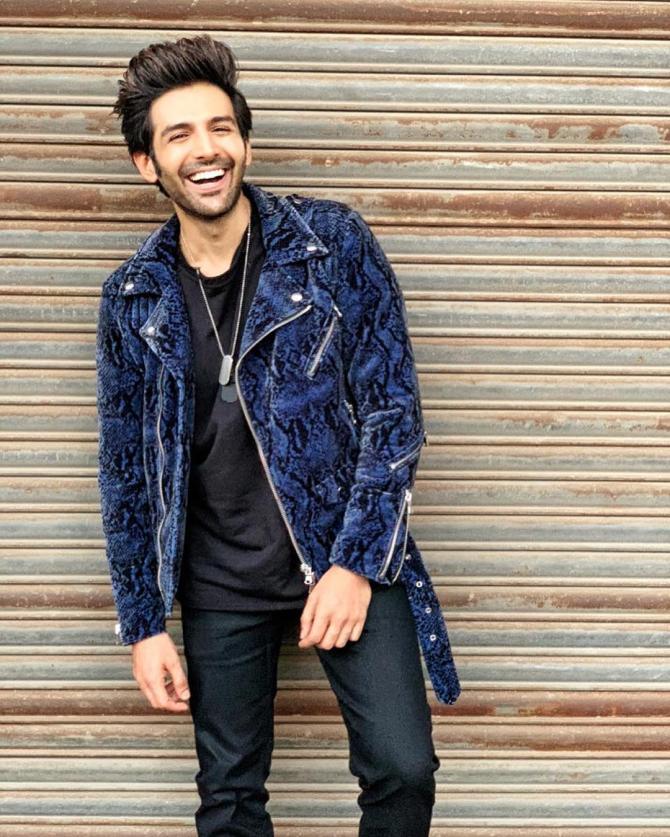 Sara Ali Khan too, opened up about Kartik Aaryan and Ananya Panday's link-up and said, "Finding him cute is a very personal, it's a very one-on-one thing. When I say one-on-one, I mean me and me. It's a Sara-Sara thing. So how does it matter if he finds some other person who names starts and ends with A cute? That's good for him and her." On the other hand, Kartik had said about Sara, "I am fond of her as well. We met at an award show recently and she is a wonderful person." (Also Read: Kartik Aaryan Finally Agrees For A Coffee Date With Sara Ali Khan, After She Gives Him A Right Swipe)

Who do you like Kartik Aaryan better with – Sara Ali Khan or Ananya Panday? Keep us posted!