Bride-To-Be, Katrina Kaif Donned A Yellow 'Sharara' Worth Rs. 1.3 Lakhs As She Left For Her Wedding

Katrina Kaif is all set to tie the knot with her boyfriend, Vicky Kaushal. The bride-to-be was spotted in a yellow 'sharara' and looked radiant!

Katrina Kaif is a diva, who has been ruling millions of hearts ever since she has joined the Bollywood industry. With her stellar performances in movies like Rajneeti, Zindagi Na Milegi Dobara, Ek Tha Tiger, Dhoom 3, Tiger Zinda Hai and Bharat, she has proved the mettle of her versatility. Apart from being a versatile actress, Katrina is also well-known for her fashion statements. Every now and then, she takes the internet by storm with her unique style and designer outfits.

For the unversed, Katrina Kaif has been hitting the headlines for quite some time for her wedding speculations with her alleged boyfriend, Vicky Kaushal. According to a report in Pinkvilla, Katrina and Vicky are all set to have a grand wedding on December 9, 2021, at Six Senses Fort, Barwara, Rajasthan. It is also reported that Katrina and Vicky will wear Sabyasachi on their big day. As per the reports, Katrina will wear Abu Jani for her mehendi ceremony, Manish Malhotra for her sangeet ceremony and Gucci for the reception.

Katrina Kaif Looks Like A Princess At Her Bridal Entry, Her Sisters Carried Her 'Phoolon Ki Chaadar' On December 6, 2021, the bride-to-be, Katrina Kaif was spotted by the paparazzi as she had left for her grand wedding in Rajasthan. The actress had looked radiant in a yellow-hued sharara. She had kept her look subtle with straight tresses. Katrina had greeted the paps outside her house and had smiled brightly as she had posed for the camera. The actress had looked like a ray of sunshine and her bridal glow was unmissable! 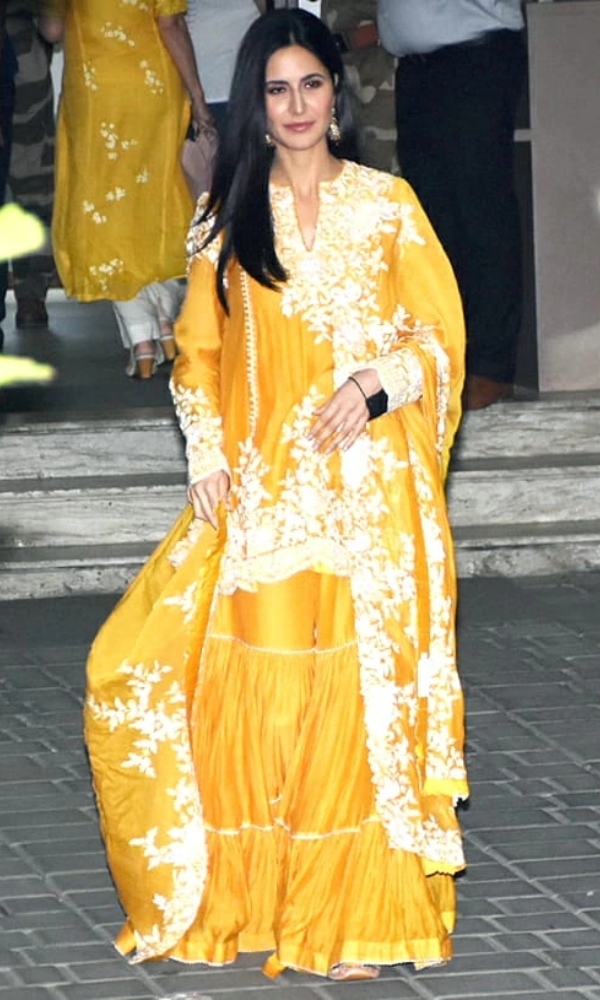 Katrina had donned a V-neckline kurta featuring intricate floral embroidery in white and pastel shades. The full-sleeved kurta had a scalloped hem with the embroidery running throughout its borders. The actress had paired it with a matching yellow sharara with a large flare, and a dupatta with the same floral pattern on the hemline. Katrina had accentuated her look with accessories and had opted for dangling statement earrings and simple juttis to complement her ethnic ensemble. 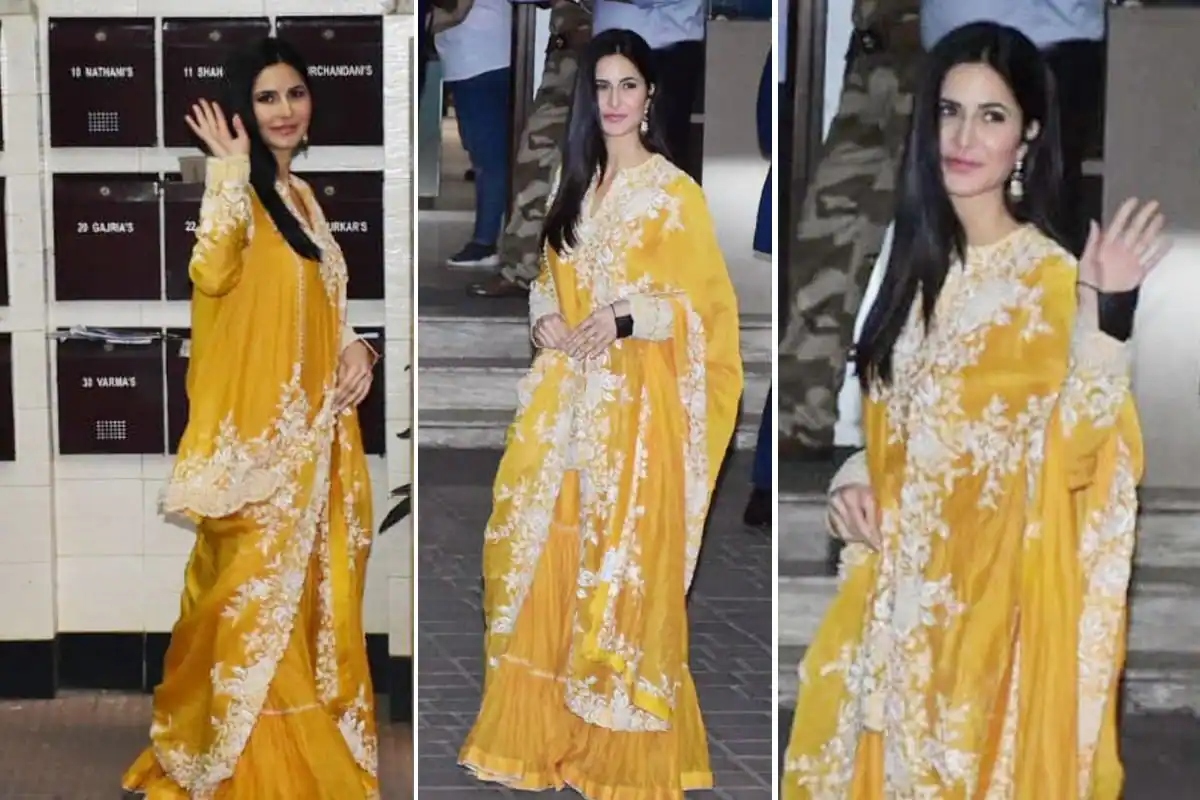 Styled by Anaita Shroff Adajania, Katrina Kaif was a sight to behold in her yellow outfit. Katrina's gorgeous ensemble was from the shelves of the ace designer, Anamika Khanna. We were stunned to know the hefty price tag at which this elegant yellow outfit was purchased by Katrina Kaif. Upon doing some research, we found out that on the designer's official website, this yellow sharara set is priced at the hefty amount of Rs. 1,37,984.

On December 5, 2021, Katrina Kaif was spotted outside her alleged boyfriend, Vicky Kaushal's residence with her mother, Suzanne Turquotte. The mother-daughter duo had looked glamourous in their respective outfits. While on one side, the doting mom had worn a green-coloured suit, on the other side, it was Katrina, who had left everyone in awe with her lovely pristine white saree. The masterpiece was from the shelves of famous celebrity designer, Arpita Mehta. 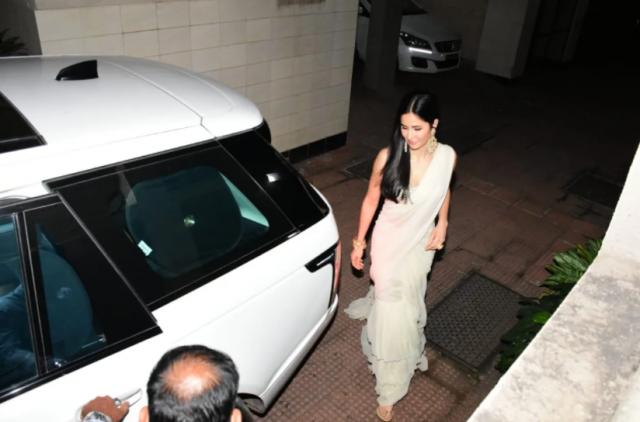 Talking more about the intricate details of Katrina's white saree, it was an ivory georgette ruffled saree. The gorgeous actress had teamed her saree with a lovely customised silver sequinned strappy blouse. The shimmery blouse was clearly the highlight, as it was decorated with some unique reflective diamantes on an ivory background. Katrina's blouse had come with a plunging neckline, and the beautiful double straps had featured stylish sequin embellishments. The actress had draped the white saree in the traditional Indian style. Another part of Katrina Kaif's saree that needs a special mention was her pallu that had come with unique ruffles on its edges. Katrina had completed her look with some chunky royal bangles and heavy gold earrings, along with her stylish toe heels. She had looked nothing less than a diva in her pristine white saree. Her pictures were all over social media, and everyone was anxious to know the price of this beautiful saree. After some digging on the internet, we had discovered that the cost of Katrina's pristine white saree as stated on the designer's official website was Rs. 54,000. 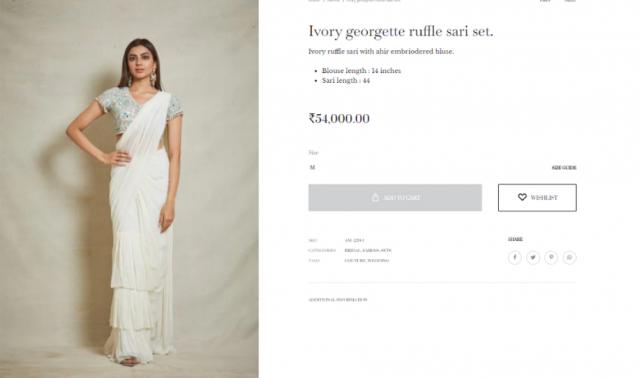 We can't wait to see the gorgeous Katrina Kaif in her bridal avatar!

Katrina Kaif Looks Like A Princess At Her Bridal Entry, Her Sisters Carried Her 'Phoolon Ki Chaadar'