KGF star, Yash Pandit shared a cute video of his little munchkin, Rocky Jr attempting to dance in his toy jeep and we are drooling over how cute he is! Check out the video below!

KGF star, Yash Pandit and his wife, Radhika Pandit, are an ideal couple as well as proud parents to two little munchkins. The duo had tied the knot in 2016 and had welcomed their little angel on December 2, 2018, and had lovingly named her Ayra. After the birth of Ayra, the life of Yash and Radhika had revolved around their adorable daughter. And on October 30, 2019, the lovely couple had embraced parenthood for the second time and had completed their family when they had welcomed a baby boy, Rocky Jr. Ever since then, both Yash and Radhika are riding high on parenthood which is pretty evident from their social media handles! (Recommended Read: Deepika Padukone Has Some Weird Talents, Only Hubby, Ranveer Singh And Sister, Anisha Know About)

On April 30, 2020, the doting mom, Radhika Pandit, had shared the first-ever picture of their little boy. The actress had taken to her Instagram handle and had posted the first picture of her little prince. Along with the picture, Radhika had written, "Presenting the apple of my eye, the rainbow of our family… and sure to be Mama's boy our lil Junior. Do give him all your love and blessings!!"

Aamir Ali Shares A Soulful Video Of His Mother, Feeding Milk To His Daughter, Ayra On Women's Day

Shikha Singh Thanks God For Sending Her Baby Doll, Alayna In Her Life, Shares An Alluring Picture

Puja Banerjee Looks Like A Savage Mom In Black Shades, Strikes Stylish Poses With Her 'Son-Shine' 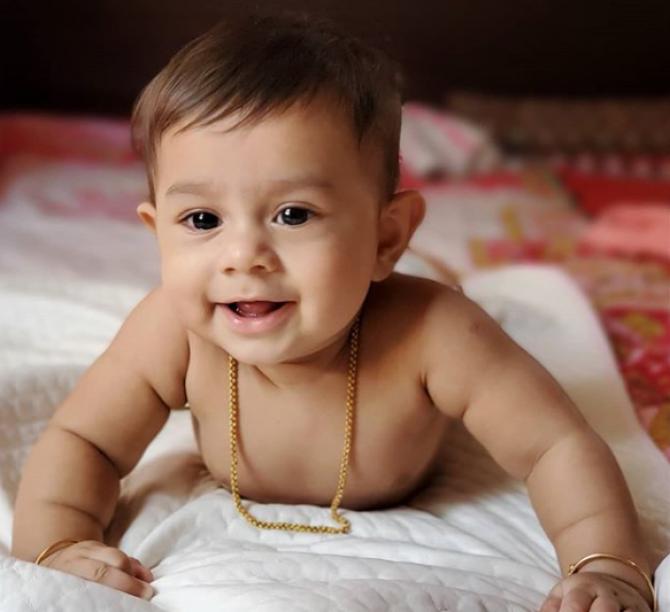 Recently, Yash Pandit took to his IG handle to share a cute video of his son, the little munchkin, Rocky Jr attempting to dance in his toy jeep and we are drooling over how cute he is! Rocky Jr looked cute as a button in a blue-striped shirt and little cargo shorts. He can be seen standing in his toy jeep trying to dance on the beats of the music. Yash has also put a quirky caption alongside the video which can be read as "Can barely stand, but once the music is on our little man turns into a party animal! PS: Do ignore the over-enthusiastic dad in the background."

We had seen the first glimpse of KGF star's whole family on April 30, 2020, when the popular maternity and child photographer, Amrita Samant had shared the first family picture of Yash and Radhika Pandit with their little ones. In the picture, we could see the doting parents posing with their little munchkins, who had looked adorable. While their little baby doll, Ayra had posed in her daddy's arms, the little prince was seen sleeping in his mom's arms. Along with the picture, Amrita had written a small note that could be read as "Absolutely blown away by their humility, Radhika and Yash's family were an absolute honour to document! Need I even say anything about that little stud muffin in the centre (Rocky jr. as he's known to many) and that excited little doll in daddy's arms?? Edible little teddies, them both. So grateful that I got to meet these two amazingly talented and beautiful, warm souls!" (You May Also Like: Soha Ali Khan Reveals How Daughter, Inaaya Naumi Kemmu Loves Grooving To The Zumba Sessions) Some time back, in an interview with The Times of India, the doting dad, Yash Pandit had revealed that his little princess isn't a princess anymore and has become his 'mother' as she feeds him! Yash had said, "It is a wonderful phase. Kids not only bring a lot of happiness but also a different side of me. I have been enjoying this time with them. Ayra now has a routine that she has to feed me. She has become a mother to me - daughters are like that." The actor also talked about what Arya does when someone opens the door. He had revealed, "She keeps running all the time. It may be because of the lockdown, as we aren't going out anywhere. She is also sensing that no one is going out, so, whenever she sees an opportunity to go out or someone opens the door, she runs." (Also Read: Maniesh Paul's Wife, Sanyukta Paul Shares Note, Says 'When You Go Out, You Put Kids And Me At Risk') Aamir Ali Shares A Soulful Video Of His Mother, Feeding Milk To His Daughter, Ayra On Women's Day