Sanjay Dutt and Maanayata Dutt are a rock-solid couple and have time and again proved their deep love for each other, be it public acceptance or on social media. Now, when it comes to a couple so much in love with each other, any special day becomes extra-memorable for the two. (Also Read: Poorna Patel And Namit Soni's Star-Studded Wedding Reception, Pics And Videos Inside)

And guess what? Something similar happened today, i.e. July 22, 2018, on Maanayata Dutt’s birthday! Yes, Sanjay Dutt’s better-half and entrepreneur, Maanayata turned 39 and naturally there had to be a rocking party for the big day. Now, as part of the celebrations, last night for the same, something opposite happened. A video of Maanayata Dutt singing a song for her hubby, Sanjay Dutt on her own birthday is going viral on social media.

Sanjay Dutt Has The Loveliest Birthday Wish For Wife Maanayata, Pics Of Celebrations Inside!

Deepika Padukone Wished Beau Ranveer Singh On His B'Day With A Groovy Dance, Video Inside

Sanjay Dutt And Maanayata's Wedding Anniversary: When The Actress-Wife Revealed Who Proposed First 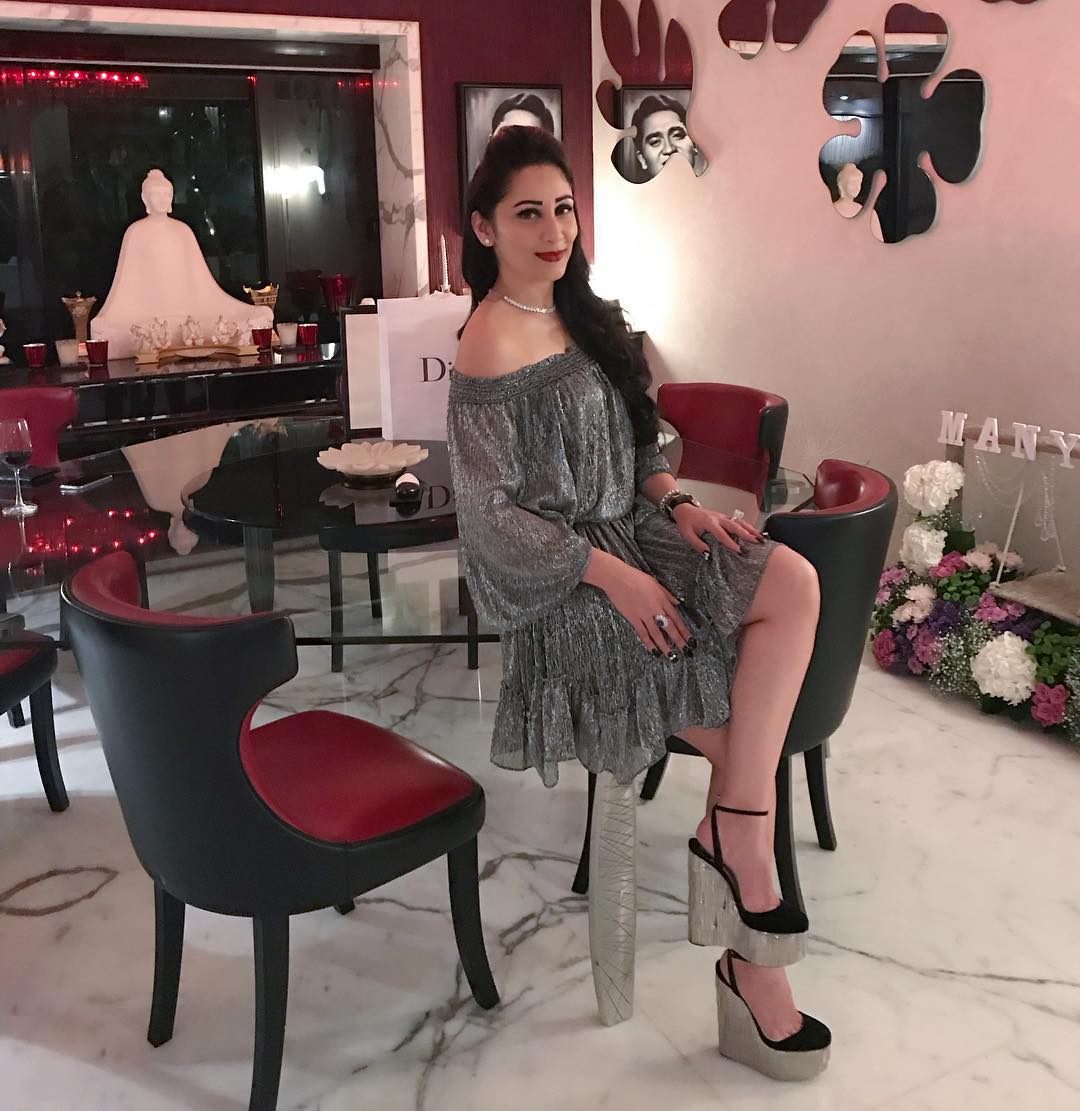 Yes, instead of Sanjay, it was Maanayata singing a song on her birthday. Isn’t that so sweet? Maanayata sang the famous Hindi song, Kya Yahi Pyar Hai, from the film, Rocky which also happens to be Sanjay Dutt’s debut film. He could be seen in the background listening and enjoying the song attentively. Take a look at Maanayata Dutt singing for husband Sanjay Dutt on her birthday:

Coincidentally, this is the same song which was used in the recently released Sanjay Dutt biopic Sanju, to highlight Sanjay’s debut. Speaking of which, on June 29, 2018, when Sanju released, Maanayata, posted a beautiful picture of her hubby along with her twins. The doting mommy, from behind the lens, wrote a caption that will melt your heart, “Ruk jaana nahin tu kahin haar ke..... kaaton pe chalke milenge saaye bahaar ke #mysanju #bestesthalf #proudwife #sanjuthefilm #love #grace #positivity #dutts #mumbai #beautifullife #thankyougod”. Here’s the picture: For those who do not know, Maanayata and Sanjay got married by tying the knot at the Taj Exotica in Goa on February 7, 2008, as per Hindu traditions, after dating each other for two years. Considering the charges against Sanjay Dutt in connection to the 1993 Bombay blasts, Maanayata has also been under the radar always. (Suggested Read: Amrita Prakash On Her Alleged Boyfriend Vivian Dsena, Says He Treats Me Like Younger Brother) 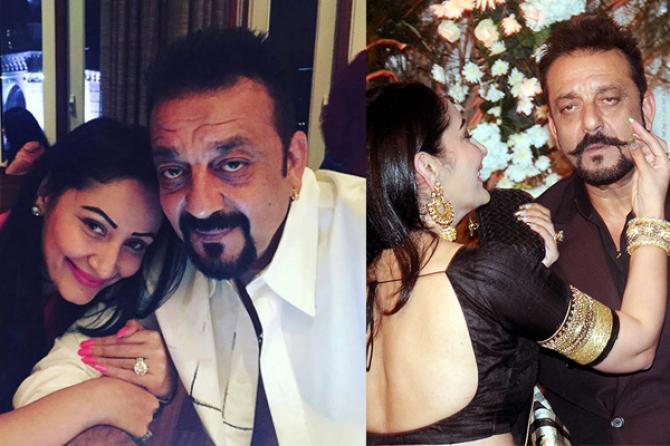 But then, their love for each other surpasses the reports and rumours. Talking about how her life has changed post-marriage, she once shared in an interview, “Oh yes. I've never been happier. Sanju has stood by me through thick and thin. I've known him for nine years. We started seeing each other seriously in 2005. But he knew my past. So when 'friends' tried to provoke him he just laughed it off. He knew everything about me. When I was going through hell before my marriage, I'd pick up the phone and ask him for help. We're both very positive people and we like to live and let live. We both believe in forgiving. And we believe every saint can have a past. And every sinner can have a future”. 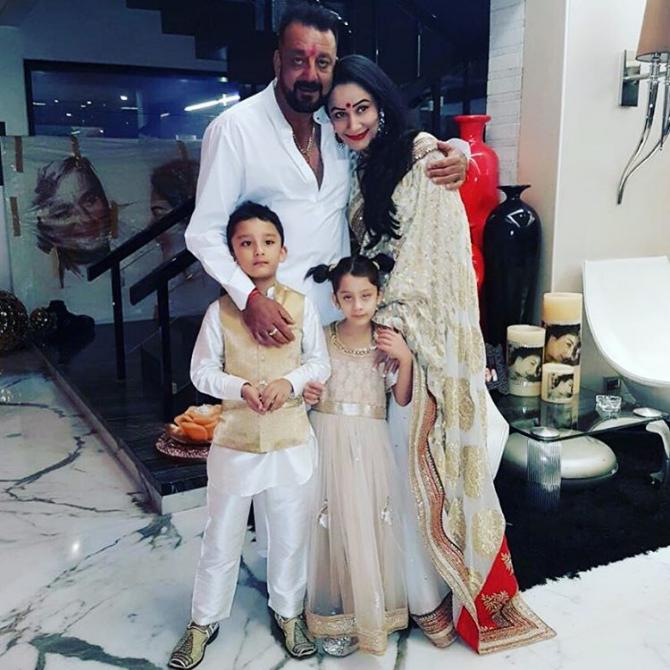 On October 21, 2010, Sanjay and Maanayata were blessed with beautiful twins, Shahraan and Iqra Dutt. Talking about his marital life, Sanjay once recalled in an interview, “Maanayata is not my 'better' half but my 'best' half. She is my strength. Whenever I fall down, she supports me. I believe she had suffered more than myself. Raising kids alone and realising each day what she had, I pray that nobody gets to suffer it anywhere”. (You May Like: Juhi Parmar Writes An Open Letter To Ex-Husband, Sachin Shroff, Says She Is Shattered As A Woman)

We wish the strong wifey a very happy birthday. Isn’t the video of Maanayata Dutt singing for her husband Sanjay Dutt on her birthday cute beyond words? On July 29, 2018, Sanjay Dutt turned 59. Yes, it was Sanjay Dutt’s birthday yesterday and wifey Maanayata made it the most special one for him. For the uninitiated ones, Sanjay Dutt and Maanayata Dutt walked down the aisle on February 7, 2008. And after two years of marriage on October