Madhuri Dixit's '2020 Rewind' Videos Include Her Special Moments With Hubby, Dr Nene And Their Sons

Madhuri Dixit's '2020 Rewind' Videos Include Her Special Moments With Hubby, Dr Nene And Their Sons

Madhuri Dixit posted four videos on her social media handle, giving glimpses of her 2020 and spoke about how it was special for her. It included her memorable moments with husband and sons.

If we rewind 2020, the year had a lot of surprises or rather shocks that had made it memorable for everyone in the world but for all the wrong reasons. While we remember the infamous 2020 for the tragedies, if we look back now, there were a lot of special and nice moments too, for us to be cherished forever. It gave us time to spend with the ones we love, learn new skills, explore our hobbies, taught us some life lessons and a lot more. As the year comes to an end and we are just a few hours away from bidding farewell to 2020, B-town’s Dhak-Dhak girl, Madhuri Dixit shared her ‘Rewind 2020’ videos which comprised of some of her beautiful family moments. (Also Read: Anushka Sharma Reveals How Baby's Themed-Nursery Would Connect Little One To Big Part Of Their Lives)

Be it her Dhak Dhak in Beta, Ek Do Teen in Tezaab, Didi Tera Dewar in Hum Aapke Hain Koun..!, Choli Ke Peeche in Khalnayak, The Dance Of Envy in Dil To Pagal Hai, Kay Sera Sera in Pukar or Kaahe Chede Chede Mohe in Devdas, Madhuri Dixit’s love for dance and our love for her isn’t a secret and there wasn’t, isn’t and won’t be an actress in the history of Indian cinema to match up to the beauty and the elegance with which she performs. When she was on the peak of her career, Madhuri had exchanged wedding vows with Dr Sriram Nene and moved to Los Angeles, California. After living a happy married life, away from the media limelight, with husband and their two kids, Arin Nene and Ryan Nene, for a few years, Madhuri came back to India where her heart lies.

Madhuri Dixit Nene's Son, Arin Nene Returns From The US To Celebrate The Holidays With Family

Madhuri Dixit's Hubby, Shriram Nene Wishes Their Son Ryan On His B'Day, Takes A Dig At His Long Hair Madhuri Dixit posted four videos on her social media handle, giving glimpses of her 2020 and spoke about how it was special for her. Sharing the first video, Madhuri revealed her first-ever performance with her son for #IforIndia had made a memorable moment for her. She captioned the video as “To the year that was 2020. Unusual, unexpected, difficult... I'm looking at the bright side with the hope for a better new year for all of us. Join me on this #2020Rewind. Performing at #IforIndia with my son was indeed a memorable moment. A virtual concert which became a movement to raise funds for the COVID warriors and people in need.” In the caption of her second video, Madhuri penned about her first English song, Candle. She wrote, “#Candle became the message of hope through music and my tribute to the frontline workers, who are the real heroes of this year & the years to come. Thank you for all your love & support for my first ever English song. #2020Rewind.”

Amy Jackson And BF, Ed Westwick Enjoy Opera Night, The Couple Can't Take Their Eyes Off Each Other

The third video gave glimpses of Madhuri Dixit, exploring her hobbies and included pictures of her, cooking, singing, reading and dancing with her son, Arin Nene. Madhuri captioned this video as “From cherishing old hobbies to picking up new ones. Cooking, singing, reading, dancing, and more... #2020Rewind.” The final video was of the accomplishments of Madhuri and her husband, Dr Sriram Nene. Madhuri captioned it as “In the middle of all these hardships, thank you for joining us at Dance With Madhuri to spread joy & positivity through dance #2020Rewind.” (Also Read: Anushka Sharma Reveals She Won't Engage Her Child On Social Media As They Don't Want To Raise Brats)

10 Bollywood Celebrities Who Believe In Weird Superstitions, From Ranbir Kapoor To Deepika Padukone

In an interview with the Filmfare, Madhuri Dixit had spoken about what was her lockdown routine with her husband, Dr Sriram Nene and their kids, Arin Nene and Ryan Nene. Madhuri had said, “Initially, it was hard to get into a routine. You try to understand the new situation from every angle. The harm the virus has caused, the economy being flattened, lives disrupted… Kids have also got onto virtual learning. It’s not a bad thing but the kids (referring to sons Arin and Ryan) suddenly have to plan everything for themselves. But I’m proud of them. Initially, it was hard for me too. We don’t know how long it will go on. So I started my riyaz. I practise singing with my mother in the evening. We’re trying to keep ourselves occupied doing something constructive. On the brighter side, you have more time with your family now. Earlier, one often complained about not being able to do so many things. (Smiles) After a long time, I read a book - Born A Crime (by Trevor Noah).” Revealing how is it being a mother to two teenage boys, Madhuri Dixit had remarked, “When you have teenagers at home, it’s a different world altogether. They’re also going through so many changes. In their bodies, in their thinking, everything… so it’s a challenge as a parent. But I’m enjoying it. I want to be as close to them as possible. Another year and the older one (Arin) will be in college. I want to spend as much time as I can with them. Right now, they’re busy with school work. They spend time with friends on Skype and Zoom. They play games online.” When asked how much her boys are like her and Ram, Madhuri had retorted, “They are a mix bag. In temperament, outlook and behaviour, the older one is more like Ram. But Arin’s interests also lie in drama, music, math, physics… The younger one (Ryan) loves music. But he’s also interested in science, engineering and math. He’s more like me. He’s quieter. Ram is gregarious. Arin is outgoing and gregarious too. Arin is a mini Ram. If you see photographs of Ram at 17, the similarity with Arin is uncanny.” (Also Read: Mira Rajput Kapoor's Little One Makes Her Morning Lovelier With A Priceless Gift And 'I Love You') 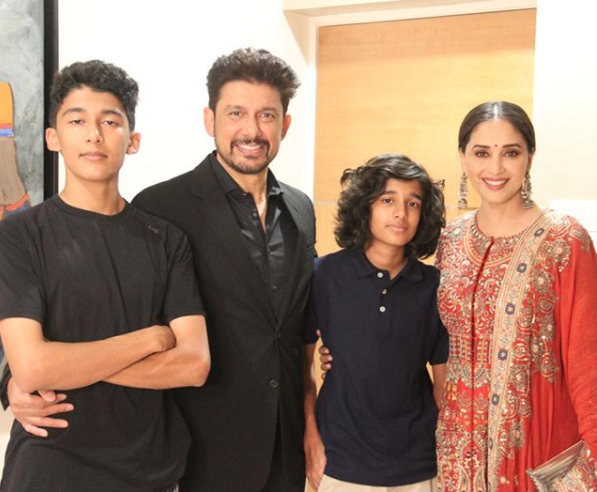 If you were to rewind 2020, what would be your best moments this year? Let us know!

Madhuri Dixit Nene's Son, Arin Nene Returns From The US To Celebrate The Holidays With Family

Madhuri Dixit's Hubby, Shriram Nene Wishes Their Son Ryan On His B'Day, Takes A Dig At His Long Hair

Amy Jackson And BF, Ed Westwick Enjoy Opera Night, The Couple Can't Take Their Eyes Off Each Other

10 Bollywood Celebrities Who Believe In Weird Superstitions, From Ranbir Kapoor To Deepika Padukone