On June 10, 2020, Esha Deol Takhtani and Bharat Takhtani's little girl, Miraya Takhtani had turned one and the star amma posted a picture of the unicorn-themed first birthday cake for her baby girl.

Time flies by within a blink of an eye and this cannot be proved truer than having a baby at home and watching them grow. One moment you are delicately holding them for the first time in your arms and the next moment, you see them crawling around in the house, speaking in their gibberish language, learning how to walk and reaching the significant milestones of their life. You keep on wondering where the time went and wish to seize every moment with them. (Also Read: Shahid Kapoor Treats Wife Mira Kapoor With 'Best Pasta' As He Cooks For The First Time In Five Years)

It has been a year since Esha Deol Takhtani and Bharat Takhtani had embraced parenthood for the second time and had welcomed an angel in their lives. On June 10, 2019, Esha and Bharat had welcomed a baby girl, once again, and named her Miraya Takhtani. Their one-and-a-half-year-old, Radhya Takhtani was promoted to ‘big sister’ and one glimpse at the Deol-Takhtani baby girls, and it would be difficult for you to guess who is who. Such is the striking resemblance between the little girls!

Esha Deol Reveals How Her Motherhood Experience With Miraya Was Different From First-Born, Radhya 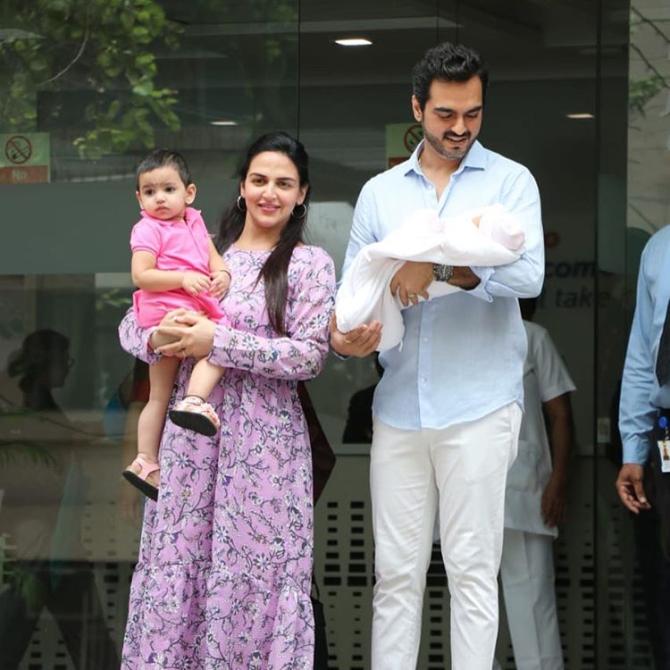 On June 10, 2020, Esha Deol Takhtani and Bharat Takhtani’s little girl, Miraya Takhtani had turned one and while we were waiting for the star parents to give a glimpse of how they had celebrated their daughter’s first birthday, it was only a day later that the star mommy posted a sneak peek via her IG story. Esha posted a picture of the unicorn-themed first birthday cake for Miraya and it looked sumptuous! With clouds, stars, rainbow and a unicorn, Miraya's first birthday cake had 'Miu turns One' written on it. It was on October 20, 2019, when Radhya Takhtani had turned two, Esha Deol Takhtani and Bharat Takhtani had introduced their then-five-month-old baby girl, Miraya Takhtani to the world, and we were astounded by the uncanny resemblance of the two angels of the Deol-Takhtani family. Esha had posted a family picture on her Instagram and had written, “Radhya’s birthday party a big thank you to all my friends & family for spending this special day with us! And thank you to everyone for the loving birthday wishes & blessings for our baby Radhya! @bharattakhtani3 #radhyatakhtani #mirayatakhtani.” (Also Read: Shilpa Shetty Kundra Occupied Son, Viaan Raj Kundra In Making A 'Mojito Salt Scrub' [Watch Inside]) On June 17, 2019, Esha Deol Takhtani had posted a thank you note for her gynaecologist, Dr Kiran Coelho, with a picture of herself holding Radhya Takhtani in her arms and her doctor by their side. Later, Dr Kiran had posted an unseen picture of the newborn angel, swaddled in her nani, Hema Malini’s arms as the Dream Girl had posed along with her three adorable grandchildren, Darien Vohra (son of Ahana Deol and Vaibhav Vohra), Radhya and Miraya. 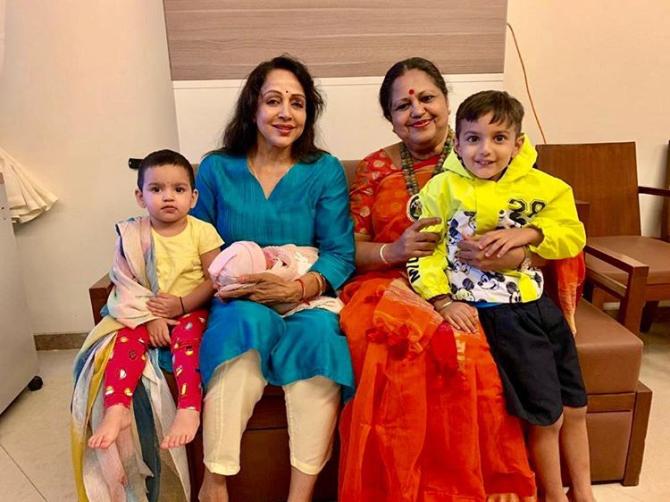 A day after giving birth to her little angel, Miraya Takhtani, Esha Deol was contacted by the Mumbai Mirror and the second-time newbie mommy had excitedly talked about her two daughters. Revealing how her second daughter, Miraya’s name is connected to their firstborn, Radhya’s name, Esha had stated, “When Lord Krishna worships Radha, it’s called Radhya, while Miraya means a devotee of Lord Krishna. Both the girls have that in common and I love how Radhya and Miraya sound together.” On her close friend, Simone Khambatta’s YouTube chat show, Mama Says, Esha Deol Takhtani had spoken on postpartum depression and had shared her experience, “When I had Radhya, there was no postpartum depression, nothing. People used to look at me and ask ‘Tu theek hai na?’ And I used to wonder why are they asking like this, I mean yeah main theek hoon. But after my second delivery, I didn’t know what it was. I didn’t experience so I didn’t know. And right after delivery, I didn’t know what was going on as I was in a room filled with people and suddenly, I felt like crying. I sat quietly and very dull, low. And I have given birth to a beautiful baby girl again and it’s a very happy moment in my life and I didn’t know what’s going on.” To read more about how Hema Malini noticed the change in newbie mommy, Esha, click on the following link. (Also Read: Esha Deol Addresses Postpartum Depression Post Miraya's Birth, Shares How Mom Hema Malini Noticed It) Esha Deol Reveals How Her Motherhood Experience With Miraya Was Different From First-Born, Radhya