Mukesh and Anil Ambani's niece, Isheta Salgaocar tied the knot for the second time, and her cousin, Isha Ambani and 'bhabhi', Shloka Mehta stole the limelight. Check out!

The Ambani family has again paved their way to make it to the headlines as they are enjoying the grand wedding of one of their closest family members. Asia's one of the richest business tycoons, Mukesh Ambani and Anil Ambani's sister, Dipti Salgaocar's daughter, Isheta Salgaocar, tied the knot for the second time, and her family is on cloud nine.

For those who don't know, Isheta Salgaocar was previously married to jewellery designer, Nirav Modi's brother, Neeshal Modi. However, within a few years of their marriage, in 2019, the couple had parted their ways for some irreconcilable reason best known to them. However, after her divorce, Isheta had found love in the arms of Atulya Mittal, who is the founder of Nexzu Mobility and the two tied the knot on July 9, 2022.

Nita Ambani Twins With Her Bahu, Shloka Mehta In Hues Of Green For Shrimad Bhagwat Saptah At Antilia A few moments back, a picture of sisters-in-law, Shloka Mehta and Isha Ambani, from Isheta's wedding, was doing rounds on the internet. In the photo, both of them posed for the camera, looking absolutely stunning. Isha donned a beautiful white-coloured jungle-printed satin long kaftan dress and kept her look minimal. On the other hand, Shloka stole the limelight in a gorgeous red-coloured sleeveless dress with beautiful embroidery detailing on the chest. She paired her look with diamond earrings and a dainty neckpiece and completed the whole look with red lipstick and smokey eyes.

As soon as the picture was uploaded on an Ambani family fan page, netizens pointed out that Isha Ambani Piramal looks pregnant. Though we don't know for sure, one of the users commented, "Isha is pregnant", followed by some heart-eyed emoji. Another one wrote, "She looks pregnant", with a pregnant lady emoji.

Let's come back to Isheta Salgaocar's wedding. Till now, we have already seen the beautiful video, wherein the bride could be seen entering the mandap with her brother, Anant Ambani. She looked absolutely breathtaking in a pastel pink-coloured lehenga. However, another picture has also made its way to the internet where Isheta and Atulya can be seen sharing their mangalsutra moment. Check it out: 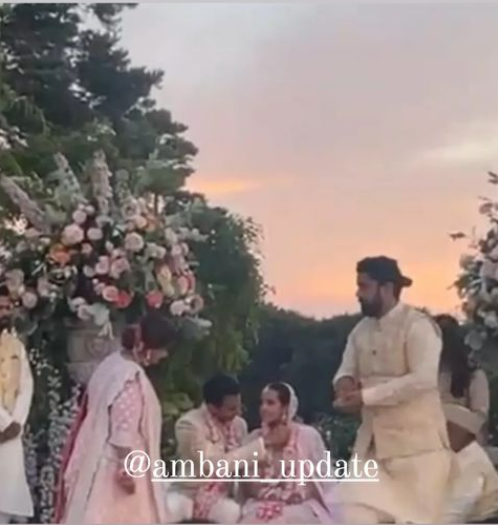 Isheta Salgaocar and Atulya Mittal had a grand wedding at The Stone Park Estate in Buckinghamshire, London, which can be seen decorated in the most lavish way. Mukesh Ambani bought it for the wedding at Rs. 529 crores. Pictures and videos from the same are doing rounds on our social media feeds.

Well, we can't wait any longer to see the newlyweds, Isheta and Atulya's post-wedding look!

Suggested Read: Karan Johar Shares Why He Embraced Fatherhood, Reveals It's Not Because He Doesn't Have Love In Life

Nita Ambani Twins With Her Bahu, Shloka Mehta In Hues Of Green For Shrimad Bhagwat Saptah At Antilia