In a recent interview, Navya Naveli Nanda opened up about her equation with her mom, Shweta Bachchan and grandmother, Jaya Bachchan. Check it out!

The Bachchans are one of the most respected families in Tinseltown. Despite being rich and influential, Bachchans always stick to their traditional roots, and their humble nature is a testament of the same. The Shahehshah of Bollywood, Amitabh Bachchan has always been a down-to-earth personality and he passed on the same traits to his kids, Abhishek Bachchan and Shweta Bachchan, and grandkids, Aaradhya Bachchan, Agastya Nanda and Navya Naveli Nanda.

Recently, Navya Naveli Nanda has started a podcast, What The Hell Navya, featuring her mom, Shweta and her grandmother, Jaya Bachchan. The three of them talk about many different things that most people should hear about. In the show, the three generations of the Bachchan family with their different opinions voice their views and share what their equation is like.

Shweta Bachchan Seeks Approval Of Navya For Her 'Kitchen Sink Haircut', Her Reaction Is Hilarious

Also Read: Alia Bhatt Celebrates Cinema Day With Someone Special And It Is Not Her Husband, Ranbir Kapoor 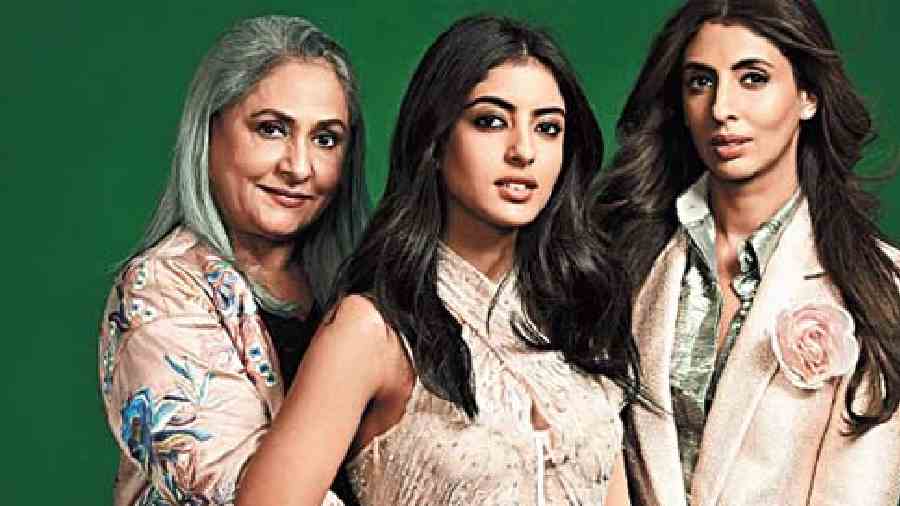 In an interview with the ETimes, Navya Naveli Nanda and her mom, Shweta Bachchan opened up about their equation with each other. When Navya was asked who is the best conversationalist among her, Shweta and Jaya, the star kid took her mother's name. Talking about who's the most unfiltered lady between the three of them, Navya said:

"I would say, my mom. She's actually really well read, like you heard. She also listens to a lot of podcasts and I think she knows a lot about current affairs. She can talk to anybody about absolutely anything. I think she's probably the best conversationalist in the family. I think that question has a very self-explanatory answer. It’s definitely my nani is the most unfiltered. But it's a trait we really respect her for, as well." Further in the conversation, Navya revealed that she, her mom and her grandmom often have conflicts on every other topic. However, she added that though they've different opinions, they always find a middle ground to resolve the conflicts. Sharing that they have a lot of arguments on different things, Navya mentioned:

"When you hear the podcast you’ll know that we've had a conflict and an argument in every single episode on every single topic. But though we have different opinions, I think in the end we always come together and kind of meet in the middle. We are not so far disconnected from each other. We pretty much believe in the same things, but of course there is a lot of conflict and a lot of arguments, over a lot of different things, which you will be able to listen to."

Navya Naveli Nanda shares a warm bond with her mother, Shweta Bachchan and grandmother, Jaya Bachchan. In the same interview, Navya opened up about the same and revealed that they all have a very easy way of communicating with each other. Reflecting on the fact that their family doesn't hold back from having conversations on different topics, Navya shared:

"I think we have a great relationship between the three of us. More than being family, we are also very good friends. I think the way that we speak to each other keeps the chemistry going. I'm not her best friend. What I was trying to say was that we have a very easy way of communicating. I wouldn't ever not speak to my mom or my nani about a particular topic and I'm not sure, but I feel that maybe a lot of people don't have that kind of equation with their families. Sometimes they hold back from having certain conversations or speaking about certain things and we don't really have that. We talk about everything, which is great."