The 'badi bahu' of the Ambani family owns some of the finest jewellery pieces in her closet, and time and again, she flaunts them with grace. Let's have a look at some of them!

The Ambanis are one of the most affluent families in Asia, and their business is popular worldwide. The ex-Chairperson of Reliance Industries, Mukesh Ambani and his wife, Nita Ambani are blessed with three talented kids, Akash Ambani, Isha Ambani and Anant Ambani. Despite having all the riches in the world, the Ambani family always sticks to their traditional roots and follow age-old family rituals. Interestingly, the doting saas, Nita is ensuring to pass on the same traditions to her bahu, Shloka Mehta.

It was on March 9, 2019, when Akash Ambani and Shloka Mehta had become husband and wife, and their wedding was one of the grandest affairs witnessed by the entire nation! The couple is blessed with a little prince, Prithvi Akash Ambani, who is the apple of the eyes of the whole Ambani clan. Besides being a loving wife to Akash and a doting mommy to Prithvi, Shloka Mehta is a diva, who never fails to win our hearts with her ultimate style. Most of all, it's her choice of jewellery that strikes our eyes. Needless to say, Shloka owns some of the finest jewellery pieces in her collection that deserve our attention.

Mukesh Ambani Opens Up On His New Role As The Grandfather Of Prithvi Ambani, Says 'Family First' Shloka Mehta is the daughter of Russell Mehta, who is the owner of one of India's leading diamond companies, the Rosy Blue Diamonds. Before getting married to Akash Ambani, Shloka Mehta was working with her father, Russell Mehta, and she had become the director of their company in the year 2014. Thus, Shloka has got an eye for the finest diamonds, and this is the reason, she has been flaunting the best jewellery pieces at every occasion. Be it her ethnic looks or classy contemporary outfits, Shloka knows how to complement her outfit with the most attractive jewellery pieces. So, without further ado, let's have a look at Shloka Mehta's exquisite jewellery collection which includes striking pieces of jewels. At her wedding, Shloka Mehta had looked the prettiest traditional bride ever in a regal golden and red lehenga from the designer duo, Abu Jani Sandeep Khosla. Her lehenga had featured zardosi and jadau embroidery. We were in sheer awe of her bridal look. Shloka had completed her look with a diamond and emerald layered raani haar, a matching choker, an elaborate mathapatti, a nath and traditional earrings. According to reports, Shloka's kundan and polki set had diamonds from South Africa and it had cost around Rs. 3 crores. On June 5, 2022, the Ambani and the Merchant families hosted Radhika Merchant's Arangetram. For the event, Akash Ambani's wife, Shloka Mehta, wore a mauve-hued silk Benarasi saree. Her look was completed with dewy sheen makeup, and she looked no less than a sight to behold. However, it was Shloka's striking choice of jewels that caught everybody's attention. She accentuated her look with a statement sheesh patti and oversized earrings, and it complemented her look perfectly. 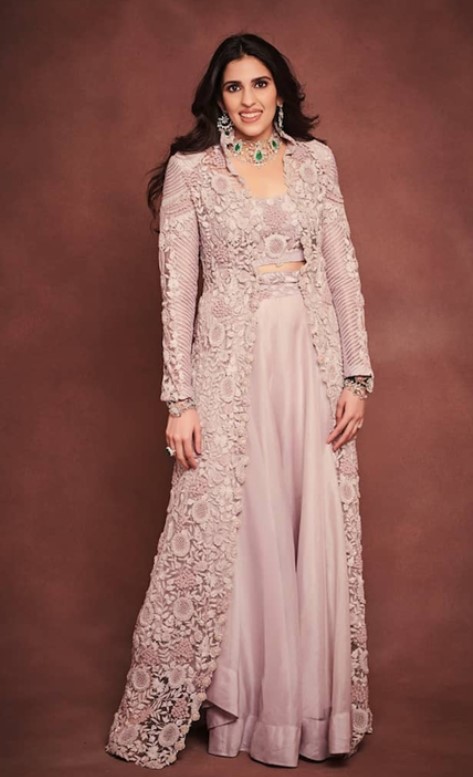 For Arjun Kothari's pre-wedding bash, Shloka Mehta was seen in the pastel-hued attire from the shelves of ace designer, Anamika Khanna. Her attire had featured a plain lehenga skirt along with a crop top and a long jacket with delicate floral embroidery. She complemented her lilac attire with a statement emerald and diamond choker, earrings, bangles and ring. Keeping her tresses open, Shloka opted for subtle makeup with glossy pink lips and winged eyeliner. Indeed, Shloka's jewellery pieces made her look enchanting and stylish. 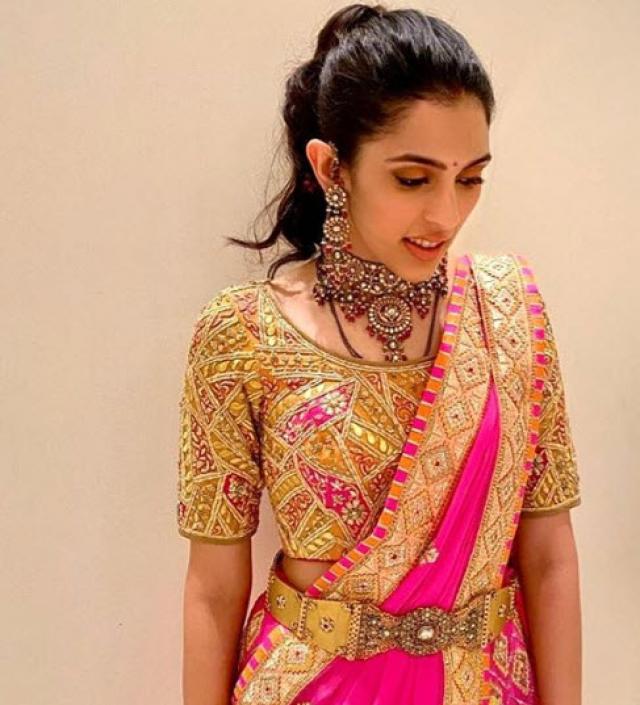 Shloka Mehta always manages to do complete justice to all her looks. For an event, the Ambani bahu had opted for a pink and mustard-coloured lehenga with gotta patti work all over it. She had accentuated her look with a quirky kamarbandh, mangalsutra, bangles, a statement necklace and matching earrings. She opted for subtle makeup while keeping her hair tied in a ponytail.

For Ranbir Kapoor and Alia Bhatt's wedding, Shloka Mehta Ambani had opted for a sheer ivory-coloured saree embroidered with thread work all over it. The gorgeousness had completed her look with diamond jewellery, which had included a dainty necklace, matching earrings, and a maang teeka. She had looked oh-so-pretty as she had flashed her million-dollar smile at the camera. For her sister, Diya Mehta's sangeet ceremony, which was held at Ritz-Carlton, Shloka Mehta looked resplendent in a chikankari lehenga from the shelves of designer, Abu Jani and Sandeep Khosla. Being an ardent diamond lover, Shloka complemented her look with a diamond neckpiece featuring green drops and matching jhumkas. She accentuated her look with kadas and some matching bangles. While Shloka Mehta often mesmerises us with her contemporary jewellery, she also owns some beautiful antique pieces. For her mehendi ceremony, she had donned a pink and yellow lehenga and styled it with some antique jewellery. Nita Ambani's bahu wore a choker with a traditional rani haar, which added an oomph factor to her overall look. She completed her look with matching bangles, earrings and jadau kangan.

Shloka Mehta believes in simplicity and prefers not to go overboard with her look, and her jewellery collection is proof of the same. Well, we are in love with Shloka Mehta's striking pieces of jewels. What about you? Let us know.

Mukesh Ambani Opens Up On His New Role As The Grandfather Of Prithvi Ambani, Says 'Family First'