Since 2015, Sonam Kapoor and Anand Ahuja have been making each other’s ‘Everyday Phenomenal’ and finally on May 8, 2018, the former had added Ahuja to her name and the latter had added the initial of his wife’s name, ‘S’, post being pronounced as husband and wife. Sonam and Anand have always credited their parents for teaching them the true meaning of love and the importance of family. And this phenomenal couple makes sure to spend quality time with their families no matter how hectic their work schedules are. (Also Read: Anil Kapoor And Sunita Kapoor Celebrate Their 36th Anniversary, Actor Narrates His Proposal Story)

Sonam Kapoor Ahuja and Anand S Ahuja are quarantining in Delhi at his residence due to the lockdown imposed in the country and that’s the reason why the Kapoor and Ahuja clan couldn’t get together to celebrate the 36th wedding anniversary of Anil Kapoor and Sunita Kapoor. On May 19, 2020, Anil and Sunita had completed 36 years of married life and their star children had taken to their IG profiles to wish them. But one wish which stood out of all the wishes was from the couple’s samdhan, Priya Ahuja.

Anil Kapoor's Worries For His Daughter, Sonam Kapoor Ahuja, Who Is In London, Is Every Father Ever Sonam Kapoor had found a mother in her mother-in-law, Priya Ahuja when she had married Anand Ahuja in 2018. Instances have proved how lucky she is to have Priya as her MIL and she too, leaves no chance to acknowledge the love and bond she shares with her. The Ahuja and Kapoor families became one with the union of Sonam and Anand. To mark Anil Kapoor and Sunita Kapoor’s 36th wedding anniversary, Priya penned heartfelt notes for the couple. Captioning the couple picture of Anil and Sunita, Priya wrote, “Wishing you a very very Happy Anniversary Sunita and Anilji. Loads of Smiles for every moment of your special day. May God Always keep you both Under His Loving Care. Lots of love.” The second picture had the two samdhans in the frame, smiling with all their heart and Priya captioned it as “Happy anniversary both of you. Always be happy with your lovely smile. Lots of love.”

Sonam Kapoor Ahuja and Anand Ahuja had celebrated their second wedding anniversary on May 8, 2020, and to make their day even more special, Priya Ahuja had penned a heartfelt note for the couple. Posting a couple of pictures from Anand and Sonam’s wedding, Priya had written, “Dearest Sonam and Anand, Happy Anniversary Bacchaas! May God bless the two of you abundantly in love, joy, and happiness. May your love for each other continue to grow with each passing year. Our love and blessings are always with you” and “Cheers to your togetherness. You brighten up our lives. Stay blessed.” She saved the best for the last as she revealed how they had always wanted a daughter and finally found the ‘sweetest daughter’ ever in their bahu, Sonam. Priya had captioned the pictures as “We always wished to have a daughter and then you came and filled our lives with so much happiness and joy. You are our sweetest daughter and we love you dearly. Have a great anniversary and a lifetime of happiness.” (Also Read: Shahid Kapoor's Mother, Neliima Azeem Reveals The First Impression Of Her Bahu, Mira Rajput Kapoor)

To pass their time during the lockdown, everyone is resorting to their hobbies to engage themselves and Sonam Kapoor Ahuja had taken up baking to treat her family with yummylicious delicacies. Giving a glimpse of the menu of sweet treats at her Delhi home, baker Sonam, dressed in an all-black outfit styled with gold statement pieces, had written, “Made chocolate walnut cake today. I had run out of chocolate and @fortunegourmetindia sent me some amazing quality chocolate. Thanks so much @missdevi for organising. Love you.” Sonam’s mother-in-law, Priya Ahuja was all praises for her but had a query in mind. She had commented, "Amazing cakes beta. How to manage the weight gain? Everybody is loving them so much." To which, Sonam had replied, “You're perfect.” 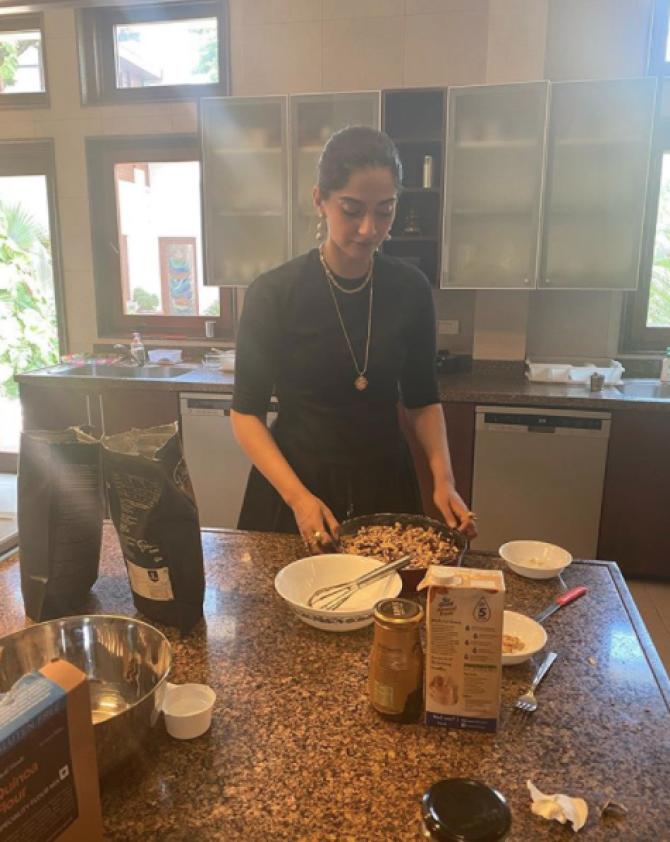 On May 10, 2020, i.e., Mother’s Day, Sonam Kapoor Ahuja had not only wished her mom, Sunita Kapoor but had also thanked her mother-in-law, Priya Ahuja for being her biggest support. Posting an array of pictures with her mother-in-law, Sonam had written, “Happy happy Mother’s Day... love you @priya27ahuja thank you for loving me unconditionally and being my biggest support.” Sonam also posted a picture of Sunita and Priya, and a collage of her and Anand’s childhood pictures. She had captioned them as “Love you both... happy mamas day!”

Sonam Kapoor Ahuja had once shared in an interview with the Deccan Chronicle that she is obsessed with her mother-in-law, Priya Ahuja. Sonam had said, “They are Sindhis and are a very private business family. They are lovely people but I don’t want to discuss much. I am obsessed with my mother-in-law; I get along very well with her. As they are not from the film industry so let’s not talk much about them. I have been dating Anand for so long. I like saying that he is my husband, but I am so used to calling him, my boyfriend. It’s fun being married.” (Also Read: Jaya Bachchan Praising Aishwarya Rai Bachchan Leaves Her 'Bahu' In Happy Tears In A Throwback Video) 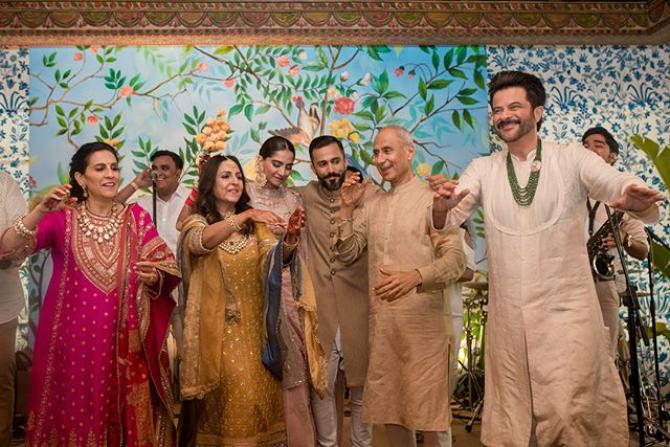 Don’t we all wish to have a similar relationship with our future mother-in-law? Much love to this DIL-MIL jodi!