Ranbir Kapoor and Alia Bhatt were spotted leaving the Kapoor mansion post-midnight on February 14, 2020. Scroll down to know why!

Every time the lovebirds, Alia Bhatt and Ranbir Kapoor make an appearance together, their fans go crazy over the prospect of a plausible announcement of their much-awaited wedding. Ranbir and Alia are often spotted together in each other's family functions, be it birthdays, festivals or trips. According to the sources, Ranbir and Alia's wedding was supposed to take place in the year 2020 but had to be postponed because of the pandemic. Even though Ranbir Kapoor is not on social media, he often finds a place in our social media feeds, courtesy to his ladylove, Alia Bhatt and his family, who never skip any chance to post pictures on their social media handles. (Recommended Read: Shilpa Shetty's Daughter, Samisha Shetty Kundra Says 'Mumma' For First Time On Her Birthday [VIDEO])

On January 31, 2021, Ranbir Kapoor's sister, Riddhima Kapoor Sahni had given a glimpse of her Sunday 'fam-jam' with her brother, Ranbir Kapoor and his girlfriend, Alia Bhatt. Ranbir and Alia had looked cute, posing beside each other as they had twinned in black. Riddhima had captioned the picture as "Fam Jam -Sunday. Missed @neetu54 @sonirazdan @shaheenb #sundaylunchathome." 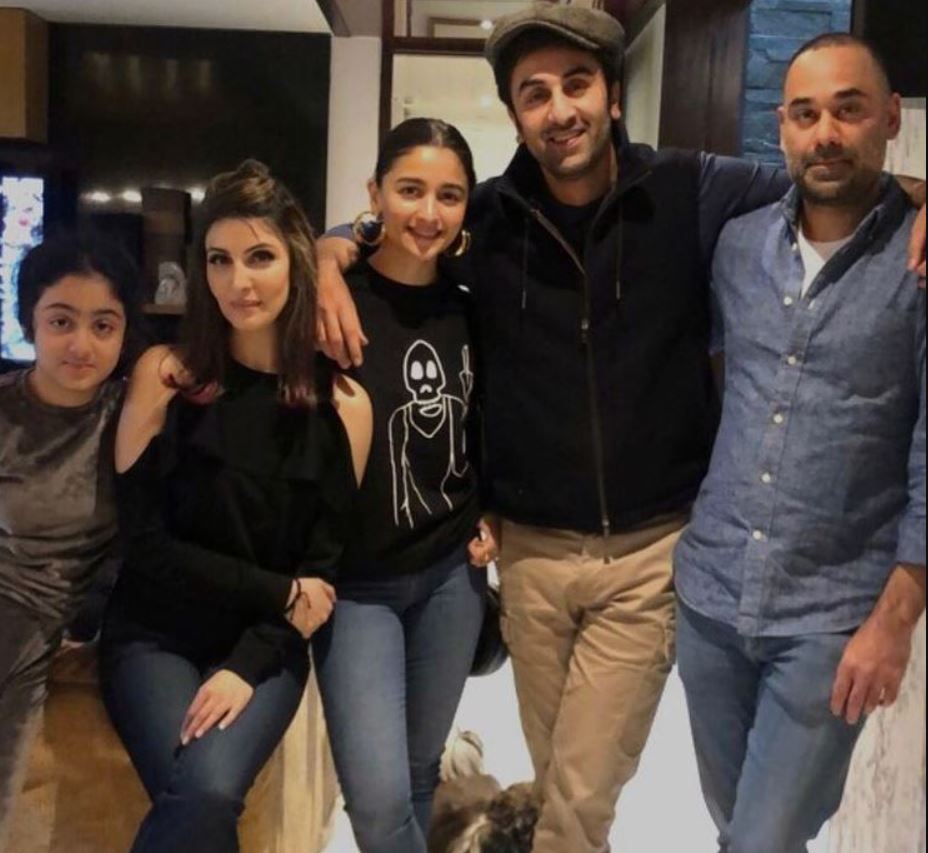 Ranbir Kapoor and Alia Bhatt were spotted leaving the Kapoor mansion post-midnight on February 14, 2020. The couple was leaving after attending Randhir Kapoor's birthday bash with the Kapoor clan. The lovebirds were seen twinning in black as Ranbir looked dapper in a black shirt paired with a black trouser, while his ladylove, Alia Bhatt also opted for an all-black look. We also got a glimpse of Alia's Valentine's date night as well, as the actress posted a mirror selfie on her IG stories, atop which she wrote, "Happy v day all day to my love and me." Check out the picture and the videos below: It would not be wrong to say that Alia Bhatt has officially become a part of the Kapoors as the actress is often seen attending various parties and functions with them. The Kapoor clan had gathered together for their Christmas feast in 2020. Kareena Kapoor Khan had attended the lunch with her husband, Saif Ali Khan and son, Taimur Ali Khan, Karisma Kapoor had gotten her kids, Samaira and Kiaan. Aadar Jain had made an entry with his girlfriend, Tara Sutaria. Ranbir Kapoor's girlfriend, Alia Bhatt had again accompanied him, and we had totally loved it. Kareena Kapoor Khan had posted a picture of the entire family from their annual lunch and had captioned it as “The tradition continues... and so does the screaming... la familia forever... All covid tested rocking and rolling... Merry Xmas people... Missed @neetu54 aunty and @riddhimakapoorsahniofficial.” (Also Read: Karanvir Bohra And Teejay Sidhu Share First Pictures Of Newborn Daughter, Announce Little One's Name) 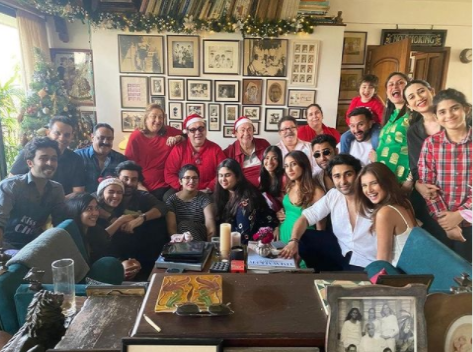 On October 25, 2020, Riddhima Kapoor Sahni had taken to her Instagram handle and had shared a beautiful group selfie from Alia's mother, Soni Razdan's birthday celebrations. In the picture, we had also spotted Riddhima's mother, Neetu Kapoor and Alia's sister, Shaheen Bhatt. Ranbir Kapoor had taken the selfie, and all the ladies had posed with their gorgeous smiles for the camera. 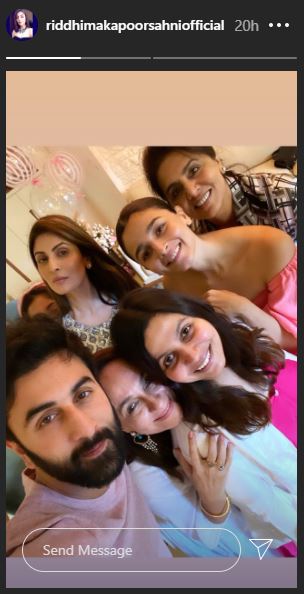 Alia Bhatt was also a part of Ranbir Kapoor's sister, Riddhima Kapoor Sahni's 40th birthday bash in September last year. On September 15, 2020, Alia Bhatt had shared a lovely birthday wish for her future sister-in-law, Riddhima Kapoor Sahni. She had posted a lovely hugging picture with her on her Instagram stories. Alongside it, she had written, "Happy birthday my darling @riddhimakapoorsahniofficial. Love you, love you, love you. Wish you a lifetime of joy and happiness." On September 14, 2020, the entire Kapoor clan had gathered together to celebrate Riddhima's birthday. The star daughter had taken to her Instagram handle and had shared a collage of the family night. In the collage, we could see a picture of Riddhima posing with Ranbir Kapoor, and another picture, wherein she was all smiling with her cousins, Kareena Kapoor Khan and Karisma Kapoor. (Don't Miss: Neha Kakkar's Hubby, Rohanpreet Singh Gets His Wifey's Name Inked On His Arm For Valentine's Day) 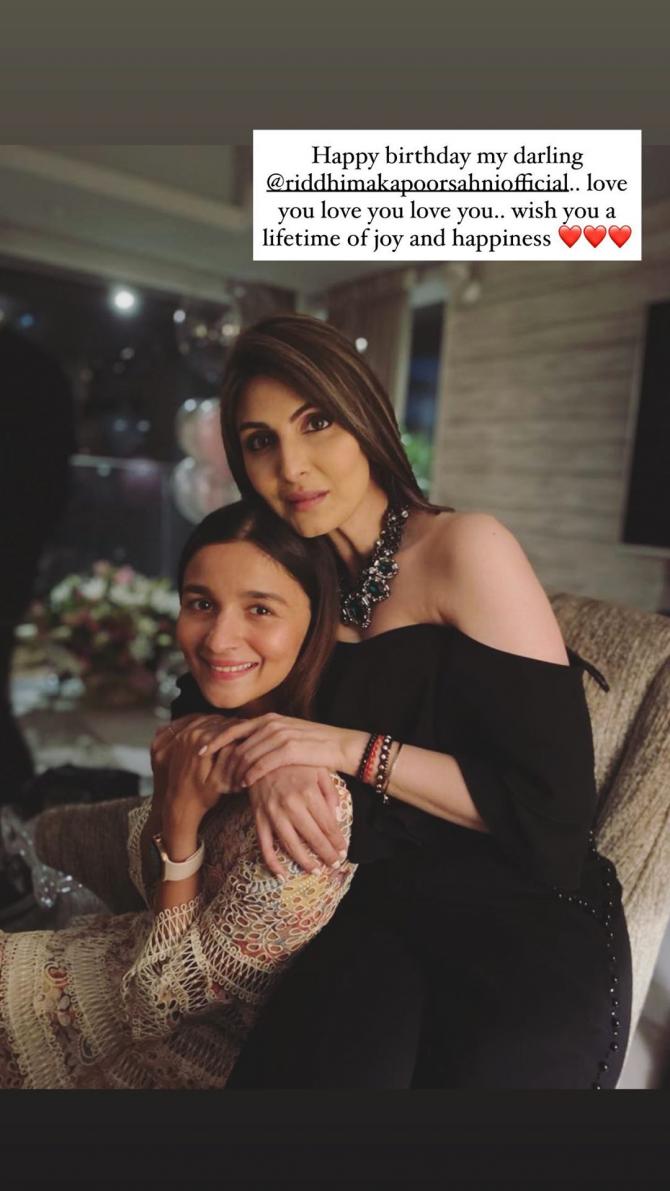