On February 7, 2021, we finally got a few pictures of Adira Chopra when she stepped out with Rani Mukerji for Karan Johar’s twins, Yash Johar and Roohi Johar’s fourth birthday bash.

Being a parent is tough. And being a celebrity parent is even tougher. Ask why? Well, to begin with, there are various media publications and millions of fans, who wait to catch the first glimpse of your baby. There’s a constant spotlight on your baby, every move of theirs becomes a piece of news and it gets difficult to keep their innocence intact by letting them live their childhood like a normal child amid the limelight. Most celebrities prefer to give their child a normal life, away from the scrutiny and cameras hounding them everywhere. Some have successfully managed to keep their little one away from the limelight and Rani Mukerji and Aditya Chopra belong to that list of celeb parents. (Also Read: Kareena Kapoor Khan's Comfy Yet Chic Look At Yash And Roohi's Birthday Bash, Shares Inside Pictures)

Just like Rani Mukerji and Aditya Chopra had kept their relationship and wedding a secret from the media, the couple had kept her pregnancy hidden from the media. It was Aditya’s brother, Uday Chopra, who had announced the arrival of Adira Chopra in 2015 with a tweet, which could be read as “IT’S A GIRL!!!!!” In an official statement, Rani had thanked everyone for the wishes and announcing the name of her baby girl, she had said, "I would like to thank all my well wishers and fans. Today life has given us God's greatest gift with Adira. We thank fans our friends and well wishers for their unconditional support and blessings. With joy we begin this new chapter in our lives." For the unversed, Adira is an amalgamation of Rani and Aditya’s names.

Rani Mukerji and Aditya Chopra want Adira Chopra to have a ‘normal childhood’, so they keep her away from the shutterbugs and let her enjoy simple joys discreetly. Even on her birthdays, we never get a glimpse of the birthday girl but on February 7, 2021, we finally got a few pictures of Adira when she stepped out with Rani for Karan Johar’s twins, Yash Johar and Roohi Johar’s fourth birthday bash. Rani tried to hide Adira’s face from the paparazzi while they were in their car but the shutterbugs managed to get a few clicks of the little angel. It was five years ago, on Adira’s birth, her excited uncle, Karan had tweeted, “Am an uncle to a beautiful baby girl today!!!!! @udaychopra!!! Rani and Adi had a baby girl!!”

It was on December 9, five years ago, when Rani Mukerji and Aditya Chopra were blessed with their little angel and since then, fans have been eagerly waiting for the couple to share Adira Chopra’s pictures. But because of Aditya’s strict no-photo policy, Adira cannot be seen even in her birthday bash pictures. Rani likes to host lavish parties for her little girl’s birthdays and 2020 was no different. Rani had hosted a private party at their residence for Adira’s fifth birthday. Adira’s Barbie-themed birthday bash had her name printed on the main entrance, the residence was decked up with lights and her celeb friends were spotted making their way to the celebration. Soha Ali Khan with Inaaya Naumi Kemmu, Neha Dhupia with Mehr Dhupia Bedi, Yash Johar and Roohi Johar, Tusshar Kapoor with Laksshya Kapoor, Rani’s mother, Krishna Mukherjee and Aditya Chopra were snapped outside the Chopra residence. (Also Read: 'Ishqbaaaz' Nakuul Mehta Showers Love On His Wife, Jankee After Becoming Parents Of A Baby Boy)

Revealing the reason behind excluding the photos of the birthday girl from her own party, Rani Mukerji had once stated in an interview with the Hindustan Times, “It is single handedly my husband’s decision. In this, he has no interest in taking my advice or my opinion. This department, he is like NO, I don’t want her pictures. And for me, it’s very important that when you are in a relationship, there are times when I would say that okay, this is it and you have to listen and the same with him. You choose your battles.I keep telling him that one fine day she is going to be clicked and ironically, she got clicked with the father and thank god it was not me. I would have got killed. But, I saw Adi’s look when that happened and believe me that everybody in my family and house were relieved that it was through Adi.” 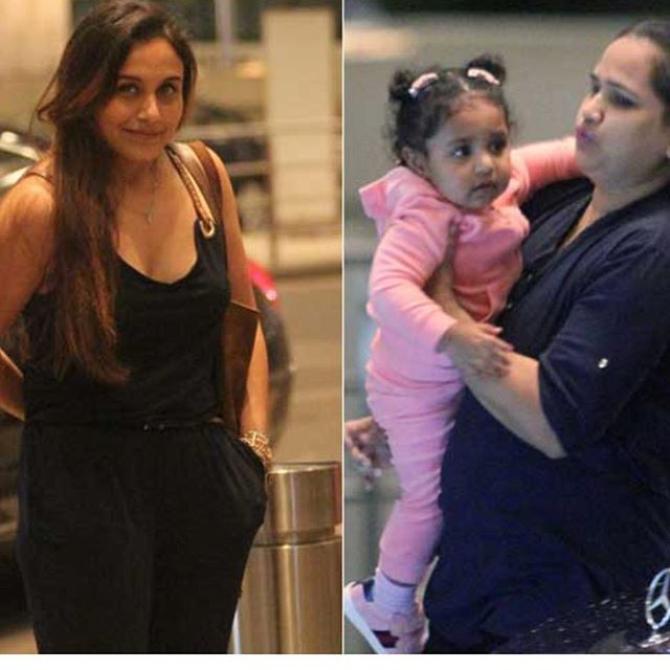 Aditya Chopra and Rani Mukerji’s little one, Adira Chopra is quite an artist as in January 2020, we had gotten a glimpse of the same. When Aditya’s brother and Adira’s chachu, Uday Chopra had turned a year older, to make his day extra special, his niece had given him an adorable gift. Adira had painted a ‘Star Wars’ inspired birthday card for her chachu, and Uday had captioned it as “My little niece made this for me today. The force is strong with her!!!” (Also Read: Kunal Kemmu Performs 'Papa Duties', Ties Daughter, Inaaya's Ponytail, Says, 'Papa Bal Bal Bache') Adira is all grown up from the last time she was clicked. Much love to the adorable munchkin!