A rare video of late legendary actor, Dilip Kumar lovingly listening to his wife, Saira Banu, recalling their beautiful love story will wet your eyes in split seconds. Details inside!

The greatest actor in the history of Indian cinema, the late Mohammad Yusuf Khan, aka Dilip Kumar, had lived a life full of awards and applauds. While his professional life was nothing less than a fairytale success story, his love story with his wife, Saira Banu, has inspired generations. Both Dilip and Saira never missed a chance to prove their immense love for each other, but sadly the actor had passed away earlier this month, to leave his better half all alone in this world, with his memories.

For the unversed, veteran actor, Dilip Kumar passed away on July 7, 2021, at the age of 98, and his family friend, Faisal Farooqui, confirmed the news through a tweet on the actor's Twitter handle. The tweet could be read as "With a heavy heart and profound grief, I announce the passing away of our beloved Dilip Saab, a few minutes ago. We are from God and to Him, we return. – Faisal Farooqui."

Saira Banu Admitted If She And Dilip Kumar Ever Had A Son, He Might Have Resembled Shah Rukh Khan

Recommended Read: Mira Rajput Kapoor Has Her Weekend Sorted, Reveals How She Is Spending It With Kids, Misha And Zain

Recently we stumbled upon a rare video of late legendary actor, Dilip Kumar, in which he can be seen attending a press conference along with this ever-so-gorgeous wife and actress, Saira Banu. In the throwback video, the Devdas actor could be seen lovingly gazing at his wife, who was narrating their beautiful love story to the gathered audience and media personnel in the video. The video is the epitome of a tear-jerker, and it's hard to hold on to our tears while watching this memorable video of this iconic couple. In the video, Saira Banu had revealed that it was her 'childhood dream' to marry Dilip Kumar. At the end of her statement, Saira Banu had also called herself 'lucky' and had stated that most of her wishes in her life had come true, by God's grace, and for that, she would be utterly grateful for the almighty. She had said, “Bahut lucky hu, kyuki logo ki jo hai hasrate tamaam poori nahi hoti hai. Lekin mai itni lucky hu aur khushnaseeb hu ki jitni hasrate meri rahi hai. Vo sab puri hui hai." For the unversed, Dilip Kumar got married to Saira Banu in the year 1966 when the gorgeous actress was only 22, and he was 44. Dilip Kumar and Saira Banu's 22 years age difference did raise many second thoughts in people's minds, but it was her dream come true moment for Saira, as she got to marry the love of her life. Dilip Kumar and Saira Banu became each other's forever on October 11 in 1966. The lovely couple had never let their age difference ever become an obstacle in their happy marital life. 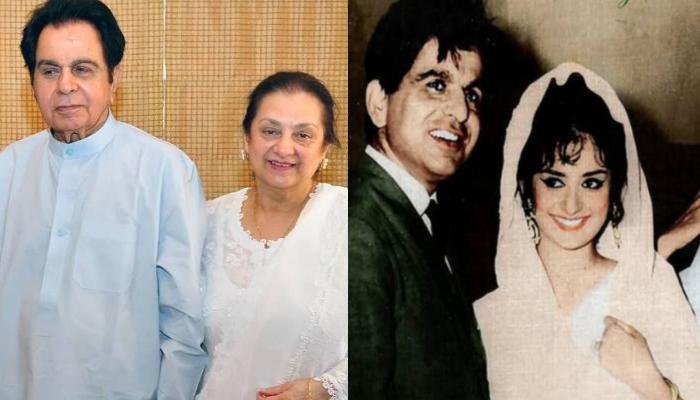 The lovely couple of the late Dilip Kumar and his wife, Saira Banu, is often regarded as one of the most loved and admired real-life couples in the history of Indian cinema. The way Dilip Kumar and Saira Banu had lived their married life is indeed a fitting example for