Raveena Tandon and her daughter, Rasha were spotted together in their ethnic best as they stepped out for Ganesh Puja. Check out as the netizens compare Rasha's look with actress, Tara Sutaria!

The preparations for the auspicious occasion of Ganesh Utsav began with great vigour, and Bollywood celebs also welcomed Ganpati Bappa in their homes with the utmost devotion. The social media feed has been flooded with pictures and videos of many celebrities bringing Lord Ganesha with pomp and show. To celebrate this joyous occasion, Bollywood's evergreen beauty, Raveena Tandon and her daughter, Rasha Thadani were also spotted in their ethnic best.

For those unversed, Raveena Tandon had broken stereotypes when she adopted two girls, Pooja and Chhaya, in 1995, and raised them single-handedly. Later in 2004, she got married to film distributor, Anil Thadani, in 2004. The couple is blessed with two children, Rasha Thadani and Ranbir Thadani. The beautiful family never fails to win our hearts with some happy moments from their blissful lives.

Recommended Read: Kartik Aaryan Reveals Whether He Dated Anyone After His Breakup With Ex-Girlfriend, Sara Ali Khan On August 31, 2022, Raveena Tandon and her daughter, Rasha were spotted together as they visited actress, Shilpa Shetty Kundra's house for Ganpati darshan. Raveena looked gorgeous in a pink-coloured flowy dress with white and yellow prints all over it. She completed her look with silver earrings and dark red lipstick. She can also be seen carrying a gift basket in one hand. However, it was her daughter who won our hearts in a mustard salwar-suit paired with a matching dupatta and golden earrings.

Raveena Tandon's 17-year-old daughter looked stunning in her traditional outfit, and netizens couldn't stop showering Rasha with love and praise. However, some of them even pointed out that she holds some resemblance to actress, Tara Sutaria. While one user wrote, "She looks like Tara Sutaria", another one took to the comment section to write, "First I thought she's Tara Sutaria." Another netizen's comment can be read as "Tara lite." Meanwhile, another follower wrote, "2nd Tara Sutaria." Check out the comments below: 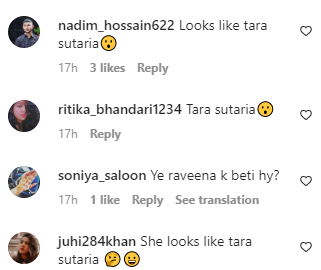 On February 26, 2021, Raveena Tandon's daughter, Rasha, had won a black belt in Taekwondo, making her mommy proud. To mark the happy moment, the gorgeous actress had taken to her IG handle and penned an appreciation note for her baby girl. Sharing pictures from the same, Raveena had penned:

"Meri beti Blackbelt! @officialrashathadani proud of you! Love the way you don’t remove your mask and are following all safety protocols! Safety first during these times of exams. Love the way you say Kal school jaana hai." What are your thoughts about Raveena Tandon's daughter, Rasha's resemblance with Tara Sutaria? Let us know.