Shahid Kapoor is reminiscing the time from his recent getaway with his wife, Mira Rajput and kids, Misha and Zain, to the Maldives and has shared an adorable photo on his IG handle.

Shahid Kapoor is an outstanding and versatile Bollywood actor as well as a loving husband to his wife, Mira Rajput Kapoor, and a doting father to his little munchkins, Misha and Zain. For the unversed, Mira and Shahid had tied the knot in the year 2015, and since then, the couple has been inseparable. They often share glimpses of their love-filled life on their respective social media accounts.

Shahid Kapoor and Mira Rajput Kapoor are the cutest power couple on B-Town. On August 26, 2016, the couple was blessed with a little angel, whom they have named, Misha. On September 5, 2018, Shahid and Mira welcomed their second child, Zain Kapoor. Shahid Kapoor Enjoys A Meal In Beas As Mira Kapoor Keeps An Eye On Misha, Zain Who're Running Around

Shahid Kapoor was on a family vacation in the Maldives and had spent some good quality time there. The couple has returned from the trip with their kids, along with some great memories and definitely a little suntan! 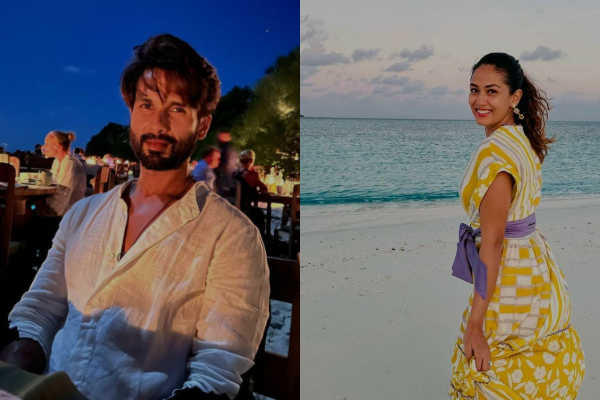 A few moments back, Shahid shared a gorgeous photo from their recent trip, and in the picture, we can see the handsome actor standing on an island, raising his hands upwards with his two adorable kids, Misha and Zain. The picture was clicked from a very far distance maybe by a drone, and as far as our eyes could wander, we only could see crystal clear oceanic water and a vast beautiful blue sky. Their whole trip made us miss our travelling days!

Along with the picture, Shahid wrote in the caption:

"THIS is a holiday. Nothing but those you love around. And nature. No phone no nothing. And you finally remember what really matters. You need nothing to be happy. Literally NOTHING is what you need, to be happy…. @mira.kapoor thanks for this amazing memory."

Shahid and Mira didn't miss sharing small glimpses from their recent trip, leaving us wanting some more. They didn't even skip on their workout routine as they were seen doing their rounds of exercises in small video clips. From their gorgeous and breathtaking snapshots, it was quite understandable that Shahid Kapoor and his wife, Mira Rajput had enjoyed one great trip with their adorable munchkins, Misha Kapoor and Zain Kapoor.

On the work front, Shahid Kapoor will be next seen in the movie, Jersey.