Through this article, let's step into Rekha's shoes and take a look at the controversial statements she had made about Amitabh Bachchan and Jaya Bachchan.

The Silsila of Amitabh Bachchan and Rekha had dominated the B-town and media in the late seventies. However, their ‘the one with a sad ending’ gripping tale doesn’t need any introduction even today as whenever they cross paths, it hits the headlines in no time. Pardesiya Yeh Sach Hai Piya, Sab Kehte Hai Maine Tujhko Dil De Diya… While Rekha had confessed her love for Amitabh, he has always maintained silence on the same, and even decades later, their relationship is still under the media scrutiny.

Years passed by and the generations have grown up hearing the humari adhuri kahaani of Amitabh Bachchan and Rekha. Soon their love story had turned into a controversial affair mainly because when sparks had flown between Rekha and Amitabh, the latter was already a married man. Later, when Rekha had made an appearance at her close friend, Neetu Singh’s wedding wearing sindoor, the media went berserk. 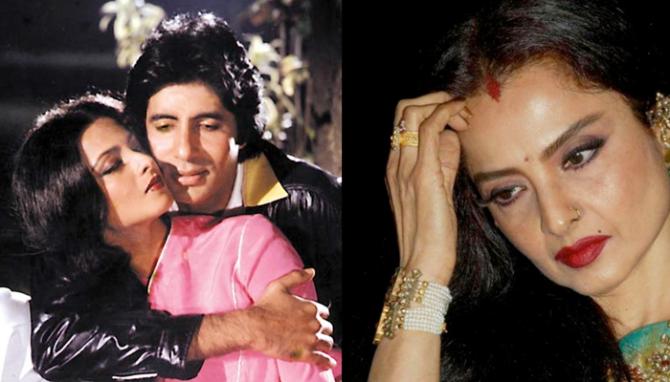 When a Silsila started off in the lives of Do Anjaane, Rekha became ‘the other woman’ and every section in the media had a story of how she became the reason of rifts between Amitabh Bachchan and Jaya Bachchan. Through this article, let’s step into Rekha’s shoes and take a look at the controversial statements she had made about Amitabh and Jaya.

When Rekha Commented On Amitabh’s Denial About Their Affair 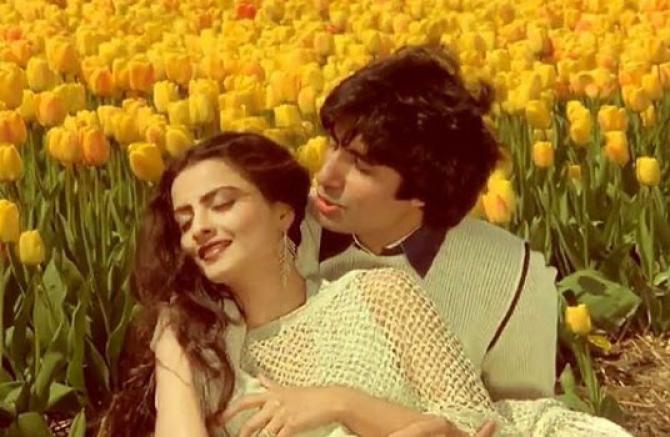 In a throwback interview with Filmfare in November 1984, Rekha had commented on Amitabh Bachchan’s denial about their relationship and was quoted as saying:

“Why should he have not done it? He did it to protect his image, to protect his family, to protect his children. I think it is beautiful, I don’t care what the public thinks of it. Why should the public know of my love for him or his love for me? I love him, he loves me – that’s it! I don’t care what anybody thinks. If he’d reacted that way towards me in private, I would have been very disappointed. But has he ever done that? I ask you. So why should I care about what he’s said in public? I know people must be saying bechari Rekha, pagal hai us par, phir bhi dekho. Maybe I deserve that pity. Not that he has 10 rollicking affairs! Mr Bachchan is still old-fashioned. He doesn’t want to hurt anybody, so why hurt his wife?”

“My reaction is not a typical reaction, I know that. But there’s a total fulfilment. We are human beings who love and accept each other for what we are. There’s more happiness in our lives than misery. Nothing else matters. But as long as I’m with that person, I don’t care. I cannot identify me with anyone else. Don’t publish this. For he’ll deny it. Then I’ll affirm it. Then there will be a statement from his camp saying, “No, no. she is nuts like Parveen Babi.” Then I’ll say “No, no. Parveen Babi is not here, but here I am to issue a statement.” Anyway, why should I be talking to you about my personal life? I am a very creative person. I have lots of interests. People love talking about my personal life. But I want to keep it to myself. Mr Bachchan is important to me, not to anybody else.”

When Rekha Addressed Being Referred To As An ‘Other Woman’ Speaking about being the ‘other woman’ in a man’s life, Rekha had shared:

“No one cares about what I have to say. I’m basically the other woman na? Parents are also embarrassed. Which parents will not be when their son has an affair? And image ki baat hain na. No one looks inside. The other party has this cute bechari image which fits beautifully. The impression is good na? I’m free. The other person can’t do that. Can’t leave him and go away. Mind you, this is a very good quality. If you can kill your desire and stick to someone in spite of knowing that this person loves somebody else, stay under the same roof. It shows strength. I must give her credit. It’s a plus point which I don’t possess. I won’t compromise. Give and take theek hain. But you might finish off the relationship if you compromise.” 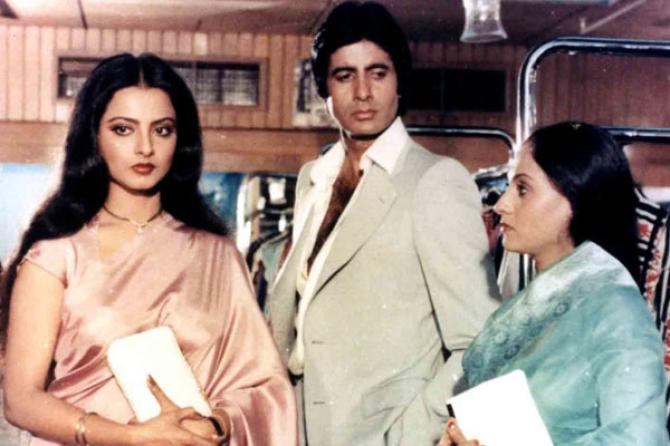 As per a throwback interview of Rekha with Simi Garewal on her show, Rendezvous with Simi Garewal, the host of the show had asked Bollywood’s Umrao Jaan if her alleged lover, Amitabh Bachchan’s wife, Jaya Bachchan had remained unaffected by their dating rumours. Answering which, Rekha had replied:

"Absolutely! I don't think she's a petty person or so insecure.”

Simi Garewal had further added to the conversation:

"Yes, and a woman is so secure because the man has given her the security."

To which came Rekha’s smashing reply:

Well, that suffices all! And then Simi Garewal had asked a question on behalf of the entire nation, ‘Did Rekha love Amitabh?’ Pat came her oft-quoted reply:

And then went on to generalise that statement:

"I'm yet to come across a man, woman, child, who can't help but fall completely, passionately, insanely, desperately and especially, hopelessly, in love with him. So why should I be singled out? You want to know the truth? There was never a personal connection with him. That's the truth. What do I deny? I'm not in love with him? Of course, I am. Duniya bhar ka love aap le lijiyega and add some more - I feel that for that person. Bottomline. " In an interview to Stardust, Rekha had revealed that Jaya Bachchan had invited her over to the Bachchan home one day. Narrating the same, Rekha had stated:

“Jaya did not mind the relationship as long as she thought her husband was only having a fling. It’s when she realized that he was really emotionally involved, that is when it began hurting her. She called me for dinner one evening and though we spoke about everything but him, before I left that day, she made sure to tell me, “I will never leave Amit whatever happens”.”

Scandalous disclosures were part and parcel of being Rekha! 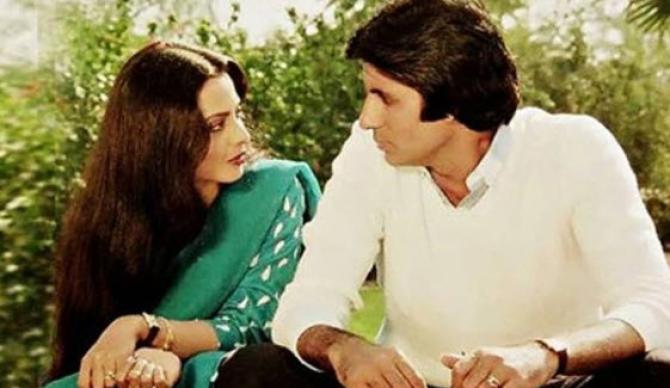 In an interview with Stardust, when Amitabh Bachchan had refused to work with Rekha, she had returned the rings that he gave to her and parted ways with him. Elaborating on the same, Rekha had said:

“Naturally I was upset and we broke off after that. I was working in Khoobsurat at that time and I put my heart and soul into my role. You will notice that in the last half of the film I am not wearing my two rings. They have been given to me by him and I never remove them even when I am sleeping. But during those days when we had parted, I sent them back to him.”

Recalling how she got to know about Amitabh Bachchan’s decision of not working with her anymore, Rekha had shared:

“Once I was looking at the whole [Bachchan] family through the projection room when they came to see the trial show of Muqaddar Ka Sikandar. Jaya was sitting in the front row and he and his parents were in the row behind her. They couldn’t see her as clearly as I could. And during our love scenes, I could see tears pouring down her face.’ It is believed that Jaya put a ban on Amitabh working with Rekha after Muqaddar Ka Sikandar, and word got around fast that Amitabh had been given an ultimatum by his wife. Discussing this, Rekha said, ‘A week later [after the trial show of Muqaddar Ka Sikandar], everybody in the industry was telling me that he has made it clear to his producers that he was not going to work with me. Everybody else informed me about it but he didn’t say a word on the subject. When I tried to question him about it, he said, “I am not going to say a word. Don’t ask me about it”.”

Amitabh Bachchan and Rekha’s adhuri kahaani is an unfortunate love chronicle and even after so many years, it still remains a controversial story for the prying media!

Next Read: Despite Many Link-Ups, Legends Jaya-Amitabh Have Been Together For 46 Yrs; A Time-Tested Love Tale! 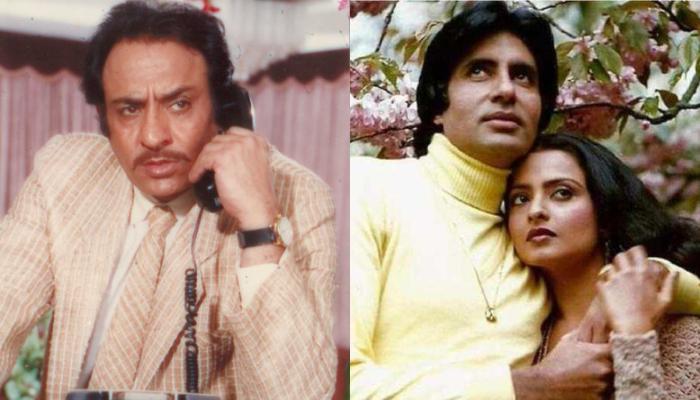 In the matter of love, Rekha has always been unlucky. When she met Amitabh Bachchan at the sets of the film, Do Anjaane, he was already married to actress, Jaya Bhaduri. As per the media reports, Amitabh and Rekha were in a hush-hush relationship, and they used to meet at one