The legendary actors, Rekha and Amitabh Bachchan's rock-solid affair made headlines in the 70s. Here's how Rekha reacted recently on 'Rising Star 3' when a contestant introduced himself as Amitabh!

In this world of glam and glitz, nothing stays a secret. Soon things come out and it might become the hot topic in the Tinseltown. And this had happened when legendary actors, Rekha and Amitabh Bachchan’s rock-solid affair made headlines in the 70s. Though Amitabh ji never went on-record to accept their relationship, Rekha, on the other hand, was quite vocal about the same. In fact, she had made everyone go crazy with her bold statements and shocking revelations in many of her interviews. (You May Also Like: Shah Rukh And Gauri Khan's Son AbRam Had A Blasting Marvel-Themed Birthday Party, Pics Inside)

Sometime back also, one act of Rekha got all the limelight when she had accidentally posed in front of Amitabh Bachchan’s poster. Well, Rekha had attended the calendar launch of renowned photographer, Dabboo Ratnani. The actress hadn’t shot for the calendar in 2019, so she made sure to pose rightly against the backdrops of the pictures. Whilst she was posing, she suddenly looked behind and realised it was Amitabh Bachchan’s poster! Her reaction after this was hilarious and that particular video went viral on social media like a teenager in love. Here’s the video that we are talking about:

Recently, Rekha had appeared on a famous reality show, Rising Star 3 as a guest. On the show, we could see how chirpy, vivacious and full of life, Rekha is in real life. On the show, when she had asked a contestant who he is and the participant replied that he is Amitabh Bachchan. The moment he introduced himself as Mr Amitabh Bachchan, Rekha was flattered and she blushed for a few minutes like crazy! Here is the video, checkout:

In an interview where she was talking about Big B, Rekha had said, "I have yet to come across a single man, woman, child who can help but fall completely, passionately, insanely, desperately, hopelessly in love with him (Amitabh). So why should I be singled out? What do I deny? Im not in love with him? Of course, I am. Duniya bhar ka love aap le lijiyega and add some more - I feel that for that person. Bottomline.” (Also Read: Arjun Kapoor Has A Perfect Reply For Troller Who Compared Him And Malaika To Dad, Boney And Sridevi) 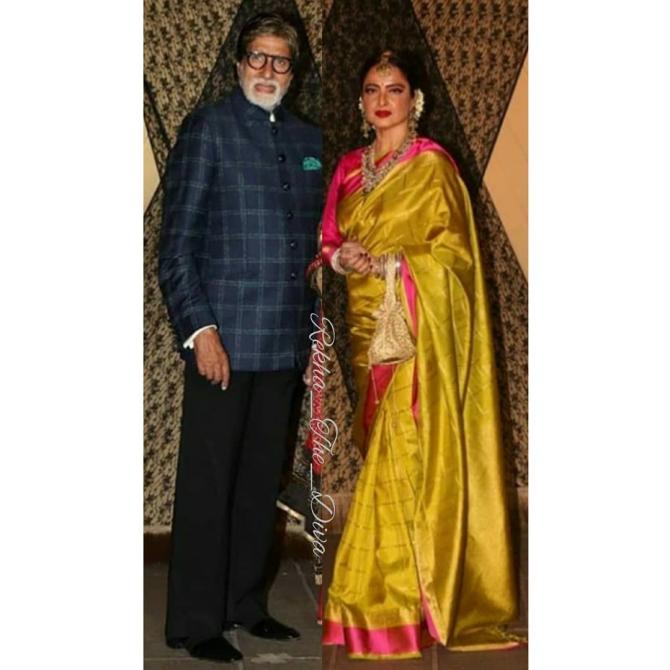 In a throwback interview with Filmfare in November 1984, Rekha had talked about Amitabh Bachchan, relationships and also about having children. Speaking about Amitabh’s denial about their affair, Rekha had shared with Filmfare, “Why should he have not done it? He did it to protect his image, to protect his family, to protect his children. I think it is beautiful, I don’t care what the public thinks of it. Why should the public know of my love for him or his love for me? I love him, he loves me – that’s it! I don’t care what anybody thinks. If he’d reacted that way towards me in private, I would have been very disappointed. But has he ever done that? I ask you. So why should I care about what he’s said in public? I know people must be saying bechari Rekha, pagal hai us par, phir bhi dekho. Maybe I deserve that pity. Not that he has 10 rollicking affairs! Mr Bachchan is still old-fashioned. He doesn’t want to hurt anybody, so why hurt his wife?” 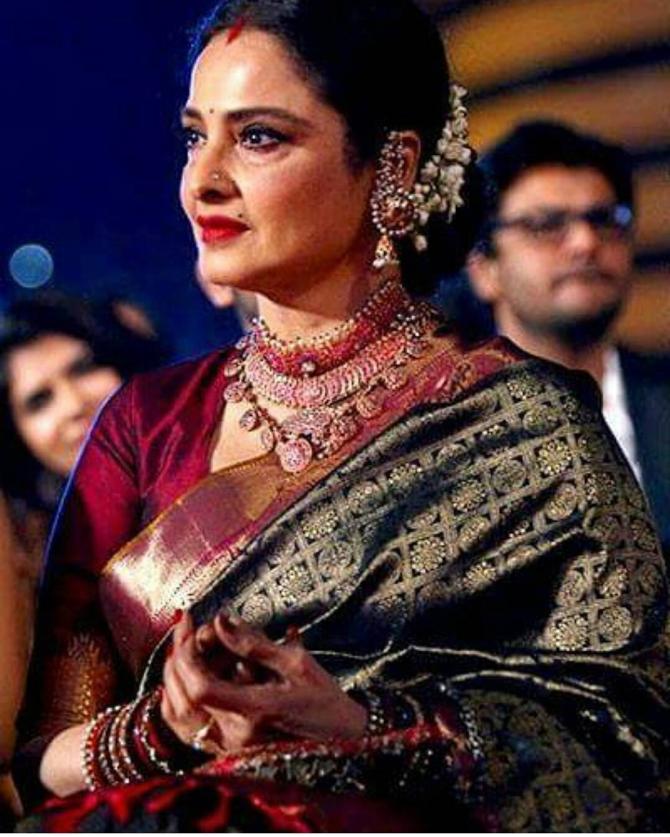 And she had further gone on to add, “My reaction is not a typical reaction, I know that. But there’s a total fulfilment. We are human beings who love and accept each other for what we are. There’s more happiness in our lives than misery. Nothing else matters. But as long as I’m with that person, I don’t care. I cannot identify me with anyone else. Don’t publish this. For he’ll deny it. Then I’ll affirm it. Then there will be a statement from his camp saying, “No, no. she is nuts like Parveen Babi.” Then I’ll say “No, no. Parveen Babi is not here, but here I am to issue a statement.” Anyway, why should I be talking to you about my personal life? I am a very creative person. I have lots of interests. People love talking about my personal life. But I want to keep it to myself. Mr Bachchan is important to me, not to anybody else.” (Checkout: Chhavi Mittal's Daughter Areeza Interacts With Little Arham, Papa Mohit Wants To Record Them)

Talking about being the ‘other woman’ in Amitabh's life, the Phool Bane Angaray actress was quoted as saying, “No one cares about what I have to say. I’m basically the other woman na? Parents are also embarrassed. Which parents will not be when their son has an affair? And image ki baat hain na. No one looks inside. The other party has this cute bechari image which fits beautifully. The impression is good na? I’m free. The other person can’t do that. Can’t leave him and go away. Mind you, this is a very good quality. If you can kill your desire and stick to someone in spite of knowing that this person loves somebody else, stay under the same roof. It shows strength. I must give her credit. It’s a plus point which I don’t possess. I won’t compromise. Give and take theek hain. But you might finish off the relationship if you compromise.” 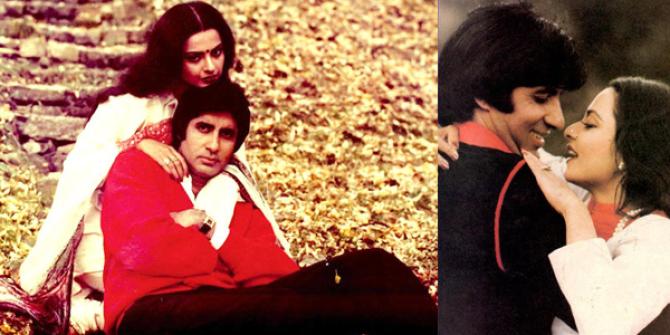 In an interview with BBC, director Yash Chopra said that Rekha and Amitabh were very much in a relationship before Silsila. He was quoted as saying, "I was always on tenterhooks and scared (during Silsila) because it was real life coming into reel life. Jaya is his wife and Rekha is his girlfriend and the same story is going on (in real life). Anything could have happened because they are working together." (Do Read: Suhana Khan Looks Mesmerising In White As She Parties With Friends [Pictures Inside]) 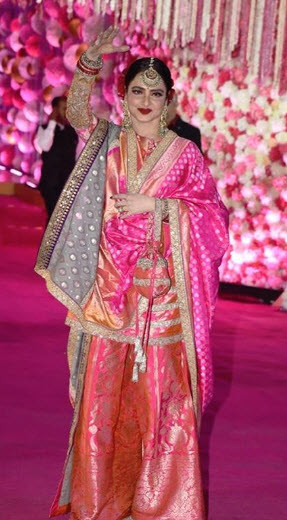 In fact, in Rekha's biography, there is an excerpt that could be read as, “Rekha was finally getting married. After a lifetime of seeking, Rekha, born out of wedlock, had finally got what she most desired: a legitimate surname. The initial days in London were beautiful. That was the first time that Rekha and Mukesh had spent so much time together. But it took only a week for Rekha to realise that they were very different people. She was also shocked to see Mukesh taking several pills a day. Still, she thought, now that they had to spend the rest of their lives together, such matters would have to be overlooked. 'I've to make [a] success of it,' she told herself. 'Can Rekha fail in anything she attempts?' They had been in London for more than a week. Rekha could see that something was troubling Mukesh. And then, one day, a gloomy Mukesh looked deep into her eyes and said, 'There's an AB in my life too.'” 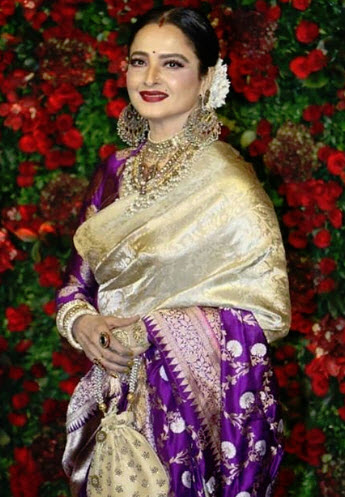 What do you guys have to say about Rekha’s reaction on Amitabh Bachchan’s name? Do let us know!