Rani and Aditya’s relationship had always been an open secret. Even though the two of them chose to keep mum about it, speculations about the duo were rife. While some called them a cute couple, others accused Rani of being a home breaker. But, Rani and Aditya never came out to speak about their relationship, thus making the rumour mills run overtime.

On April 21, 2014, Rani and Aditya, surprised everyone with their marriage news. They got married in Italy with just their close friends and family around. Post her marriage, Rani made some shocking revelations about her relationship with Aditya Chopra in some of her interviews. Read on to know this elusive couple’s beautiful love story.

Jimmy Used To Make Fun Of Priyanka, She Took Her Revenge By Marrying Him

Met, Fell In Love But Soon Parted Ways To Only Realise That They Can't Live Without Each Other

Rani and Aditya started seeing each other after he got divorced

While there were people who maligned Rani’s image, calling her a home-breaker, she had always maintained a dignified silence over this topic. Finally, after their marriage, Rani spoke about this whole thing. According to Rani, she started dating Aditya, after his divorce was finalised. This is what Rani had to say: As per the couple, they had been friends for a very long time and always bonded well. They came close when both of them were going through a low phase in their lives. And, that was something that made them realise that they were falling for each other. However, initially, Rani never thought about Aditya romantically, though they loved spending time with each other. Aditya developed an instant liking for Rani, as he felt that she was different from other actresses. Around that time, the rumours of them 'being a couple' started and within no time, they actually started dating. In Rani’s words:

“The universe around us is responsible in bringing us together by insinuating us.”

As for their first date, well, Aditya, kept it the traditional way. He went to Rani’s home to ask her parents whether he could date their daughter, and her parents were overjoyed to know about their growing love for each other. For Rani, nothing could have been more beautiful than that. Adi and Rani had worked together on a lot of projects in the past, but one thing Rani remembered vividly was their first meeting in Sampan restaurant. Rani was just one film old and Aditya, who was already famous for being the director of DDLJ was in the same restaurant. Aditya expected Rani to come up to him, but surprisingly she did not. Somehow, this struck a chord with him and he recommended Karan Johar to cast her in Kuch Kuch Hota Hain as he had liked Rani’s performance in Raja Ki Aayegi Baraat. Rani and Aditya made a decision to stay away from the media because they wanted to explore their relationship. They did not want to announce anything to the media until they knew that they were meant to be together.

Do Read: Raakhee And Gulzar Love Story: One Condition And A Fateful Night Which Broke Their Marriage

What Rani loves about Aditya?

Like any other girl, Rani too dreamt of her Prince Charming, and forRani, Aditya, turned out to be a perfect match. “He and I think alike. He loves and respects his parents. My entire world is also my parents. He is not a negative soul and will never harm anybody. I always prayed to fall in love with a man who was a good human being. As a human being, you can grow when you have a partner who is good. With Adi I have grown as a person. When I met him I discovered myself and when he met me, he discovered himself, which is very important in a relationship.”

Also Read: Despite Being Madly In Love With Neelam Kothari, Govinda Reveals Why He Couldn't Marry Her

“Adi is the Shiva of my life”- Rani Mukerji!

According to a Bengali proverb, one needs Shiva to calm Shakti and Rani believes that Aditya is the Shiva in her life. “Just like Shiv, he is calm, composed and is a one woman man who loves me as much as Shiva loved Parvati. And, of course, I am the Parvati in his life who can't see beyond him. My parents are too thrilled to have him as their son-in-law.”

Rani shares a strong and deep bond not just with Aditya Chopra, but with his family as well. And, their love story is incomplete without some inputs from their loved ones. Here is something very beautiful that Pamela Chopra, Late Yash Chopra's wife and Rani's mother-in-law has to say about the relationship that Rani and Aditya share. "Adi is a different person these days. He is so happy, always smiling. When he was younger, he would sing walking up the stairs; he has started doing that again. He danced at his wedding!She has changed him for the better. And if he is happy, why should I not be happy?" 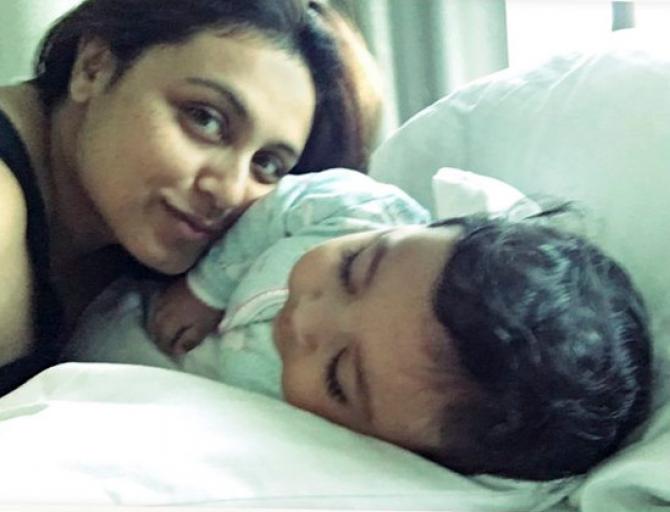 The couple welcomed their first baby on December 9, 2015, and named her Adira, which is an amalgamation of their names (‘Adi’tya + ‘Ra’ni). Above is the first picture that Rani shared on Adira’s first birthday. If reports are to be believed, the baby got two bungalows in Juhu, Mumbai, as gifts from her doting parents. There are not many pictures of Adira on the internet as her parents like to keep her away from the media glares.

Real-life Bollywood love stories are as romantic as reel-life ones, and Rani and Aditya's relationship proves it. We just wish this cutesy family, Rani, Aditya, Uday, Pamela and Adira all the happiness and love in this world!