When Neha Kakkar and Rohanpreet Singh had headed back home after their wedding ceremonies, his family had planned a grand welcome for their bahu. They also played the ring finding game in her sasural. We all wonder how our first day in our sasural would be post-wedding and stress about the awkwardness surrounding us that day. But thanks to the fun-filled post-wedding rituals, which gives the bride a chance to bond with her sasuralwale and everyone enjoys such ice-breaker ceremonies thoroughly. Undoubtedly the most fun game is finding the ring, in which, apparently the one who wins, rules over the other in marriage. So, there’s a vessel filled with milk, water, rose petals and coins. When a ring is thrown in the vessel, the newly-weds compete to find the ring using a single hand and it is played thrice, so whoever wins it twice, rules! (Also Read: Rohanpreet Singh Flaunts Wifey, Neha Kakkar's Name In His 'Mehendi', Neha Looks Highly Impressed)

It has been three days since Neha Kakkar and Rohanpreet Singh became each other’s forever and embarked on their ‘happily ever after’ journey, holding hands as husband and wife. Neha and Rohanpreet’s wedding ceremonies had begun with bride’s mehendi, couple’s haldi then sangeet and finally, Anand Karaj. Neha and Rohanpreet also had a night wedding after their Anand Karaj and the couple had set the bar high for all the brides and grooms by twinning for the ceremonies. On October 26, 2020, Neha and Rohanpreet had hosted their wedding reception in Chandigarh and had twinned in white for the same. 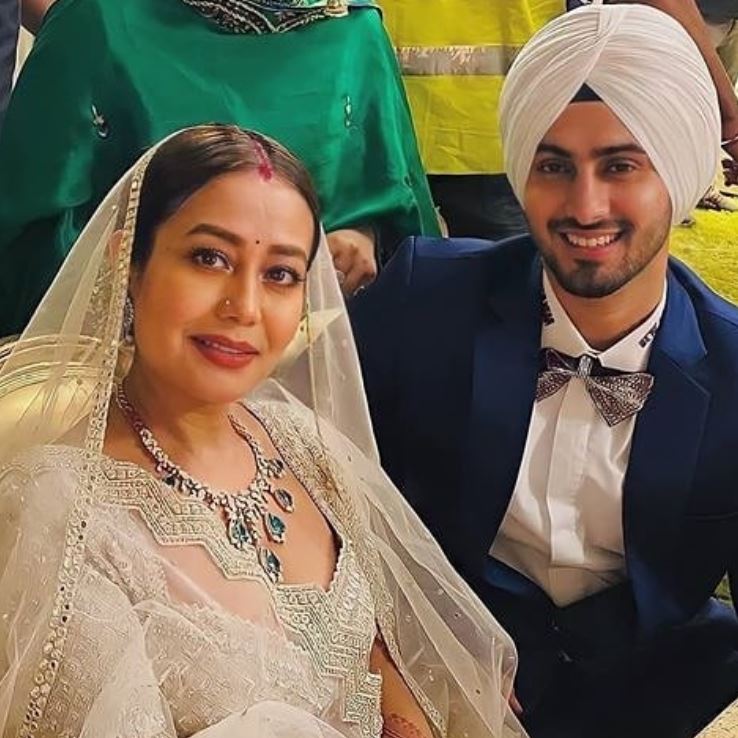 When Neha Kakkar and Rohanpreet Singh had headed back home after their wedding ceremonies, his family had planned a grand welcome for their bahu. Neha was welcomed by her in-laws on the beats of dhol at Rohanpreet’s ancestral home. The newly-wedded couple also played the ring finding game in her sasural and it is overwhelming to see Rohanpreet’s family cheering for Neha throughout. Neha’s brothers-in-law can be heard saying, "Bhabhi, jeetna hai", "Rohan, ab haar ja" and "Bhabhi shart laga lo, Rohan haarega". And when Neha wins the game, her happiness knows no bounds.

Not only Rohanpreet Singh’s family welcomed Neha Kakkar with open arms, the singer’s siblings, Tony Kakkar and Sonu Kakkar too, had posted heartfelt posts to welcome their brother-in-law. Sonu had posted a picture with Neha and Rohanpreet from their roka ceremony, where everyone was all smiles for the camera. Tony had posted a picture with the newly-weds from their second wedding ceremony and had captioned it as “May you both be together forever and ever @nehakakkar @rohanpreetsingh.” While Rohanpreet had commented, “Bhaiiii We All Have To Be Together Always!!” Neha had written, “Love you the most Jaan!” (Also Read: Neha Kakkar's All-Red Bridal Look Reminds Us of Priyanka Chopra's Royal Bridal Look [Pics Inside]) 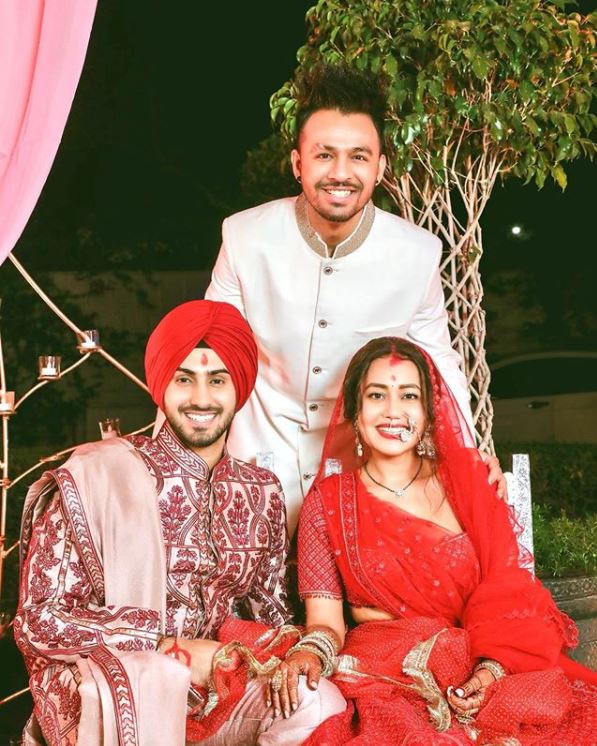 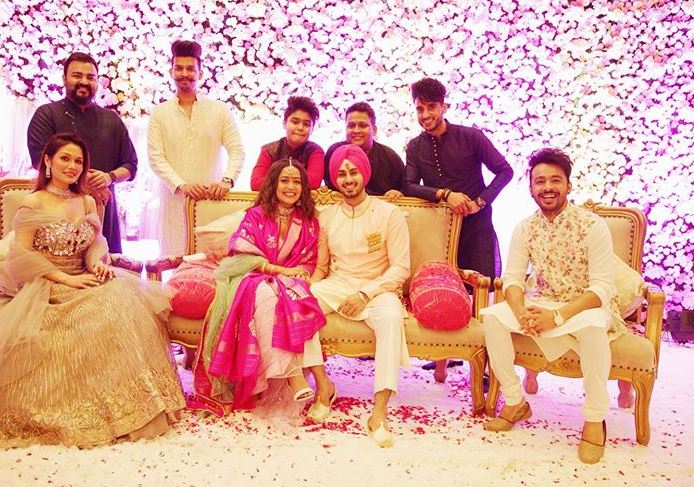 For the haldi ceremony, Neha Kakkar had opted for a minimal look with a gorgeous mango coloured plain saree by Shilpi Ahuja paired with Jaisalmer earrings and yellow floral jewellery. Neha had accentuated her look with a low-bun hairstyle which was studded with white roses. Rohanpreet had coordinated with his then to-be bride, as he chose a combination of yellow and white kurta pyjama which he had paired with a printed shawl to add some colours to his outfit. 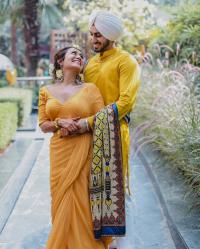 For the mehendi ceremony, Neha Kakkar had picked a stunning green Banarasi lehenga by Anita Dongre, while Rohanpreet Singh had opted for a pista-green sherwani by the same designer. Neha’s mehendi was applied a day before by the artists from Janakpuri, Delhi. Then for the Anand Karaj, Neha and Rohanpreet had Sabyasachi ensembles and for the night wedding, the couple had opted for outfits by Falguni Shane Peacock. 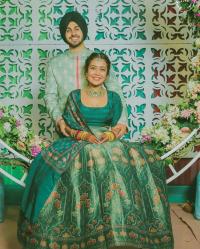 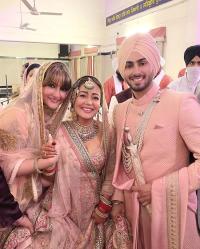 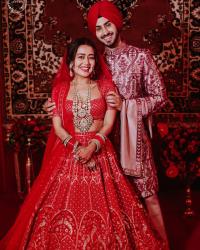 When your partner proposes you to marry him/her, it holds a special place in your heart and that moment is forever etched in your memory. Recalling that most special moment of their lives, Neha and Rohanpreet had posted pictures on their social media handles. Holding a ‘Will you marry me?’ heart-shaped placard for his ladylove in the pictures, Rohanpreet had captioned them as “Hey my love first of all, I wanna tell you that.. from The day I met You my connection with my Smile has become more stronger! Jis din hamara Roka hua, Uss din mujhe aisa mehsoos huya ki mera Sabse Haseen Khwaab Sach hogya aur main chahta hun hamari life ka har ek momment he itni khushiyon se bhara ho.. Touchwood! Sanu kade kise di v nazar na lage I promise i will take all of your pain nd in return i will give you all the happiness of this world Waheguru ji sukh rakhan Mata Rani sukh rakhein.” And Neha had written, “The day He proposed to Me!! @rohanpreetsingh Life is more beautiful with You #NehuPreet #NehuDaVyah.” (Also Read: Neha Kakkar Gives Newlywed Vibes In Red 'Chooda' As She Makes First Appearance Post Marriage) 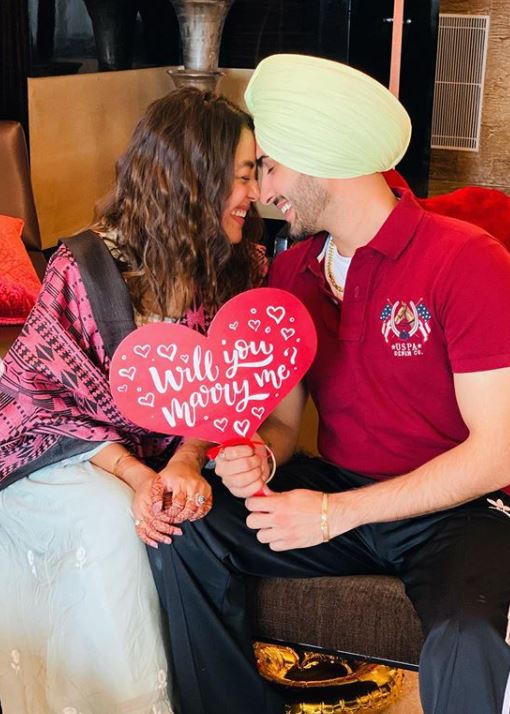 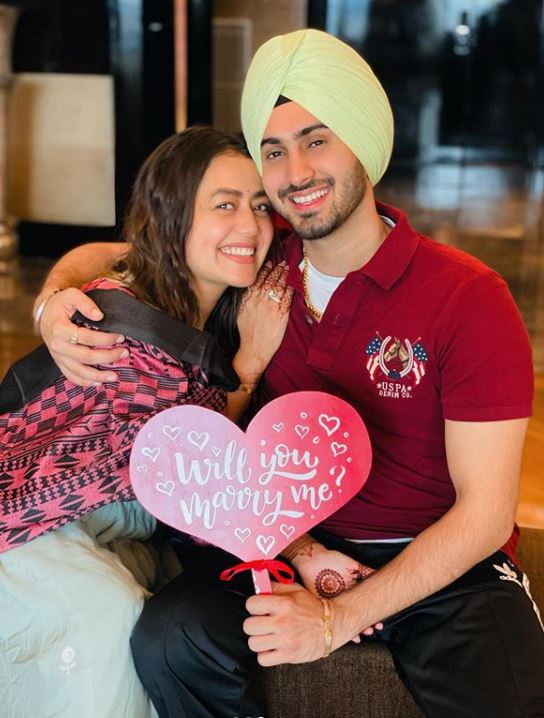 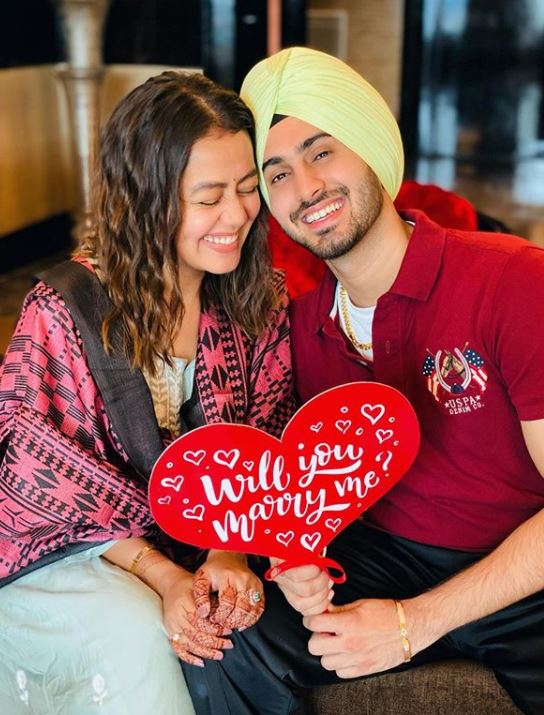 Heartiest congratulations to Neha and Rohanpreet!