Popular actor, Saif Ali Khan, in a conversation with his upcoming film, 'Bunty Aur Babli' co-star, Rani Mukerji, recalled an incident when an unknown woman barged into his house.

Popular Bollywood actor, Saif Ali Khan, is one of the most talented actors of this generation. With his spectacular performances in his films like Omkara, Kal Ho Naa Ho, Love Aaj Kal, Kurbaan, Race and many more, the ageless actor has proven the mettle of his acting skills time and again. Apart from the big screen, the actor was also seen in pivotal roles in the much-acclaimed OTT series, Sacred Games and Tandav.

As for now, the actor is leading all the headlines, as he, along with the gorgeous actress, Rani Mukerji are promoting their upcoming film, Bunty Aur Babli 2, in full throttle. Now, in a recent video posted by Yash Raj Films on their YouTube channel, Saif recalled a hilarious incident when an unknown woman had barged into his home.

Recommended Read: Inaaya Naumi Kemmu Sends A Handmade Card And A Gift To Her BFF, Mehr Dhupia Bedi, On Her Birthday Recently, a video was uploaded on the Yash Raj Films' YouTube channel. Saif Ali Khan can be seen having a heart-to-heart conversation with his upcoming film, Bunty Aur Babli's co-star, Rani Mukerji. During their conversation, Rani asked Saif if he ever had a crazy or memorable experience with his fans. Answering this, the actor recalled the incident that happened a few years ago when an unknown woman had barged straight into his old house (Fortune Heights Apartments). Saif also added that she was so confident and well-dressed that no one stopped her at the security check. He recalled:

"They opened the door and this woman barged in and looked at me and said, 'So, this is where you live'. I don't know, she just walked straight up with a lot of confidence. She looked well-dressed and like nothing was wrong, so nobody stopped her. She rang the doorbell, she walked in." The confession left Rani Mukerji in splits, and the actress asked Saif Ali Khan to open up about his wife, Kareena Kapoor Khan's reaction to the whole scene. Answering this, the actor revealed that he was extremely scared as he had gone completely blank and didn't know how to react to such a situation. He said:

"Both my wife and I are looking at her like… I got really scared and Kareena is like, 'Aren't you going to say something?' I didn't know what to say. I was thinking, 'Do I even know this person?' I said, 'I think you should leave. What are you doing here?' She said okay and then she turned around and walked out." In the same conversation, Saif Ali Khan also recalled another scary encounter with an obsessive fan, who had written a love letter to him with blood. The actor also added that his fan was inspired by a scene of his film, Main Khiladi Tu Anari, in which he received a love letter written with blood. Calling the incident a 'freaky' one, Saif said:

"A long time ago, someone wrote a letter in blood because there was a scene in Main Khiladi Tu Anari about that. Then I got a letter, 'This is my blood', which was a bit freaky."

On the professional front, Saif Ali Khan and Rani Mukerji will be next seen opposite each other in the film, Bunty Aur Babli 2, after a gap of 17 years. 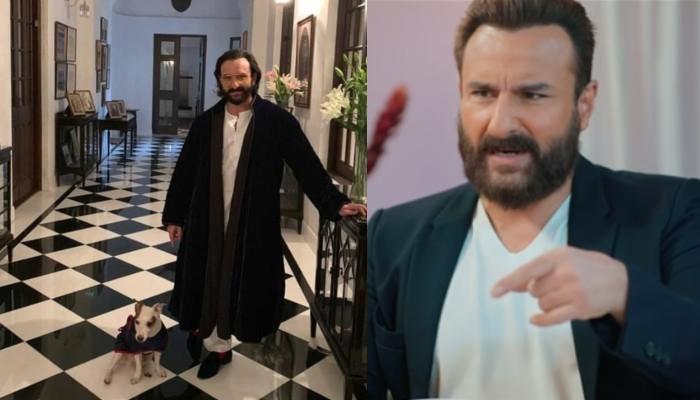 Popular Bollywood actor, Saif Ali Khan, is undoubtedly one of the most talented actors. With his spectacular performances in films like Tashan, Hum Tum, Agent Vinod, Ta Ra Rum Pum, Kurbaan, Dil Chahta Hain and Hum Saath Saath Hain, the actor has won the hearts of the audience by proving his