To mark Brother's Day on May 24, 2021, Shilpa Shetty Kundra posted a video of her little bundles of joy, Viaan Raj Kundra and Samisha Shetty Kundra, as they indulged in an adorable conversation.

Have you ever wondered how dull life would be if you don't have your brother/sister by your side? Sure, sometimes, they are the most annoying ones in the house but if not them, our days won't be as happier and better as they are! Shilpa Shetty Kundra and Raj Kundra's son, Viaan Raj Kundra finally got his partner-in-crime when the couple welcomed their second child, Samisha Shetty Kundra via surrogacy. Since Samisha's birth, it's been a sheer delight to watch her with her big brother, Viaan and the adorable relationship between the two.

Also Read: Chandrachur Singh Of 'Aarya' On Being A Single Father To His Son Shaarnajai And Parenting Little One

Following the trend of framing the hands and feet impressions of your little ones, Shilpa Shetty Kundra had gotten the same for her children, Viaan Raj Kundra and Samisha Shetty Kundra a few months ago. Preserving a beautiful memory of her little ones, which will surely be cherished by them forever, Shilpa had posted a glimpse of the frames which had Viaan and Samisha's pictures on their respective artworks. The baby picture of Viaan had resembled a lot with his younger sister, Samisha and both had looked too adorable for words. 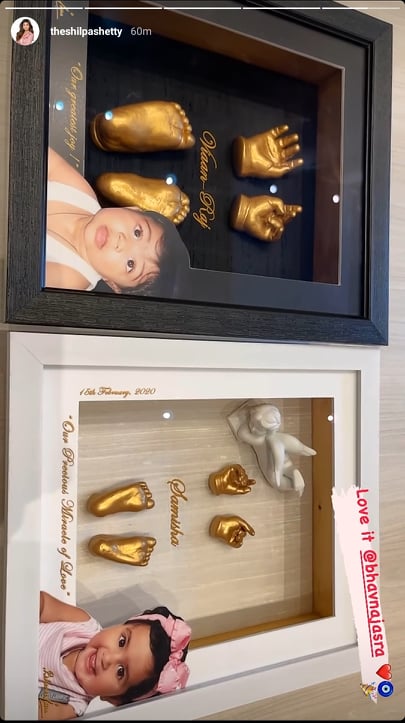 To mark Brother's Day on May 24, 2021, Shilpa Shetty Kundra posted a video of her little bundles of joy, Viaan Raj Kundra and Samisha Shetty Kundra. In the video, Viaan indulged in an adorable conversation with Samisha, as she wanted the coconut water he was drinking. Proving sharing is caring and Samisha is lucky to have a brother like Viaan, Shilpa captioned the video as "Having a younger sibling somehow makes the older one responsible, protective, mature, and even territorial (I would know!) I've had Rakhi brothers much later in life, but Samisha is lucky to have a real one. To see these visuals just makes my heart melt. Priceless!! Happy Brother’s Day #ViaanRajKundra #SamishaShettyKundra #siblings #BrothersDay #happiness #gratitude #blessed #family #famjam."

When Viaan Raj Kundra had turned 9 on May 21, 2021, his doting mother, Shilpa Shetty Kundra had posted a throwback video, and the little one's excited birthday dance, in the end, had melted our hearts. Praising Viaan for beautifully taking up the role of being a doting brother to his baby sister, Samisha Shetty Kundra, Shilpa had written in the caption, "You fought Covid-19 so bravely, you are just as excited about your virtual classes as you were about going to school, you have understood how necessary it is to always wear a mask and maintain social distance with outsiders! You’ve not only adjusted to the new normal without any complaints or tantrums, but also taken on the role of being a doting elder brother so beautifully. Have to admire how beautifully you have done it with your sense of humour and maturity. This Lockdown has made you so responsible so soon?!?! Must say, I’m a proud mommy! Happy 9th birthday, my darling baby Viaan-Raj. May you always shine, the brightest star wherever you go Mumma and papa lovvveee youuuu @rajkundra9."

2020 was extremely special for the star siblings, Viaan Raj Kundra and Samisha Shetty Kundra as it had marked the first Raksha Bandhan for them. Giving a glimpse of the celebration and the forever brother-sister bond of Viaan and Samisha, Shilpa had penned an emotional note, which could be read as "Today and this moment is sooo special for us all, as Viaan-Raj and Samisha celebrate their first Rakhshabandhan They say, 'our siblings are our first best friends', right here is the beginning of a 'forever' kinda friendship Viaan-Raj has always wanted and prayed for a lil sister - and his dream and ours has come true, making today extra special. I'm glad that they will always have each other to fall back on... someone to love unconditionally, talk to, crib about, yet be fiercely protective Tell your sibling today, how much you love them; and if they're around you, don't forget to give them a tight hug! Happy Raksha Bandhan to my Instagram #HappyRakshaBandhan." It was in February 2020 when Shilpa Shetty Kundra and Raj Kundra had welcomed their second child, Samisha Shetty Kundra. In an interview with Bollywood Bubble, when Shilpa was asked if it was difficult for not letting Viaan feel ignored after the arrival of Samisha, she had retorted, "It was really hard because my son is nearly nine and he is doing virtual school. To be a hands-on parent, with a newborn, not making him feel like he is being ignored, because he has always been the apple of my eye and all of ours, was a hard task." For Shilpa, lockdown turned out to be a blessing in disguise as she could spend quality time with both her little ones. 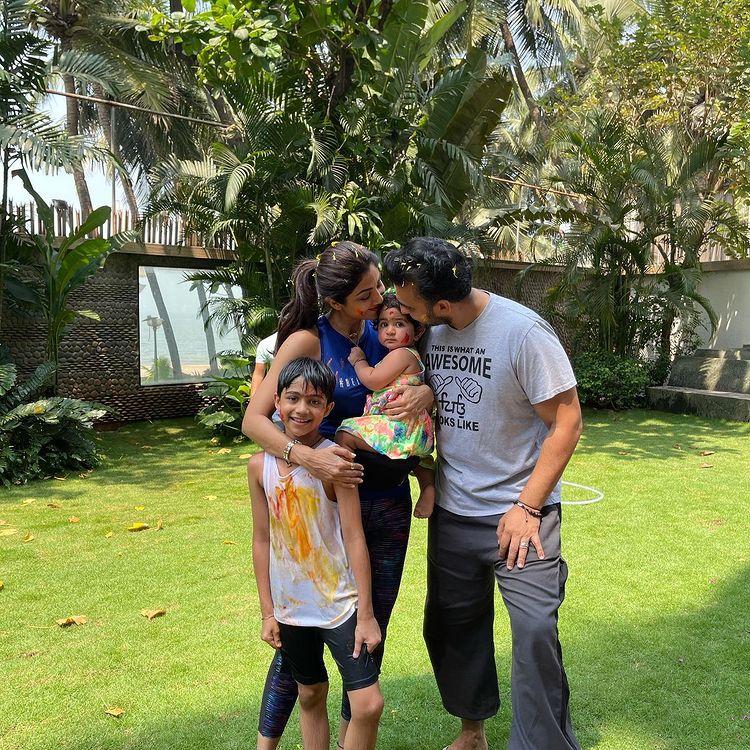 Also Read: Sushmita Sen's Daughter, Renee Sen Reveals The Things Which She Has Learnt From Her Mother

We wish many more such adorable moments to Viaan and Samisha!