Sanjay Dutt Was Once Beaten With Shoes By His Father, Sunil Dutt When He Had Found About His Smoking

Sanjay Dutt Was Once Beaten With Shoes By His Father, Sunil Dutt When He Had Found About His Smoking

Did you know once Sanjay Dutt was thrashed by his father, Sunil Dutt for smoking cigarette? Scroll down to know more!

The news of Sanjay Dutt being diagnosed with cancer had brought a surge of shock in Bollywood. Not many of you might know this, but Sanjay Dutt's family has a history of cancer. His mother, veteran actress, Nargis Dutt had succumbed to pancreatic cancer in 1981 and later his first wife, Richa Sharma too, had passed away due to brain tumour. And now Sanjay Dutt has been diagnosed with lung cancer.

We all know what an intense relationship Sanjay Dutt had with his father, the superstar of yestertimes, Sunil Dutt. Their chemistry had been beautifully portrayed in the movie, Sanju. Sunil Dutt was a movie actor, producer, director and politician. He was honoured with the Padma Shri by the government in 1968. The actor had succumbed to heart attack on May 25, 2005, at his residence in Mumbai. Did you know once Sanjay Dutt was thrashed by his father, Sunil Dutt for smoking cigarette? Scroll down to know more!

Maanayata Dutt Returns To Dubai Leaving Husband, Sanjay Dutt At Hospital With Family For This Reason

Maanayata Dutt Pens An Emotional Note For Her 'Ram', Sanjay Dutt After His Fight With Cancer

Maanayata Dutt Shares Photos With Hubby, Sanjay Dutt And Kids, Shahraan And Iqra From Their Day Out

Maanayata Dutt Shares A Lovely Picture With Sanjay Dutt, Pens A Positive Note On 'Walking Together'

Maanayata Dutt Shares A Picture With Sanjay, Shahraan And Iqra, Feels Blessed To Have A Family According to a report published in Pinkvilla, Sanjay Dutt had once recalled getting thrashed by his dad, and the reason behind it was his habit of smoking. According to Sanju, it had so happened that he was once smoking secretly inside his room, and his father, Dutt sahab had entered the room out of nowhere. And after learning of Sanju's habit of smoking, he had beaten him with his shoes! Sounds unbelievable, right? Also Read: When Sanjay Dutt Was Miffed With Richa Sharma When Trishala Dutt Called Him 'Uncle' Not 'Dad' 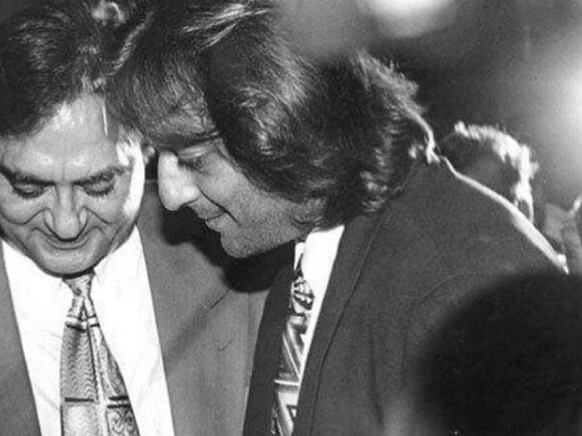 Sanjay Dutt had shared an inseparable bond with his father. Dutt sahab might not be with us physically, but he is alive in Sanjay's memories as he often mentions him in his interviews and remembers him on important days. And his social media handle is proof of the same. On Sunil Dutt's birthday some time ago, Sanjay Dutt had shared a monochrome black and white picture with his dad, from the time when he was a kid and had written, "You have always been my source of strength and happiness. Happy Birthday Dad!" 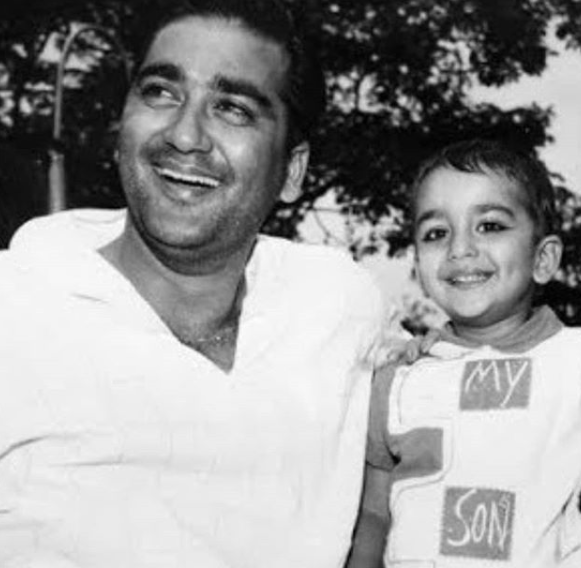 On his father, Sunil Dutt's 15th death anniversary, Sanjay Dutt had shared a montage of their pictures with his fans and followers on his IG handle. He had captioned his post as “With you by my side, I knew that I don’t need to worry about anything. Thank you for always having my back. Miss you today and everyday Dad.”

Newlywed Aishwarya Sharma Gets Surprise From Hubby, Neil Bhatt On Her First Birthday After Marriage

When Salman Khan Recalled How Salma Khan Was 'Hurt' After Her Husband, Salim's Second Marriage

Comedian Varun Thakur Ties The Knot With His Ladylove, Nikita Sahota In Mahabaleshwar

Bride-To-Be, Ankita Lokhande Admitted To Hospital Ahead Of Her Wedding, Advised Bed Rest

Sharmila Tagore Once Talked About Son, Saif Ali Khan's Second Mother And Her Help In His Upbringing

From Ghungroos To Florals On Juttis, 10 Types Punjabi Footwear Designs For Brides

On the occasion of Guru Purnima, Sanjay Dutt had shared a vintage picture of him with his star parents, Sunil Dutt and Nargis Dutt on his IG handle and had written, "Even though my parents are not here with me today, but their blessings and teachings will always remain with me. They have been my very first teachers, guiding my every step in life. #HappyGuruPurnima to all." (Also Read: When Sanjay Dutt Revealed How His Once GF Tina Munim Had Taken His Mother, Nargis' Place In His Life) 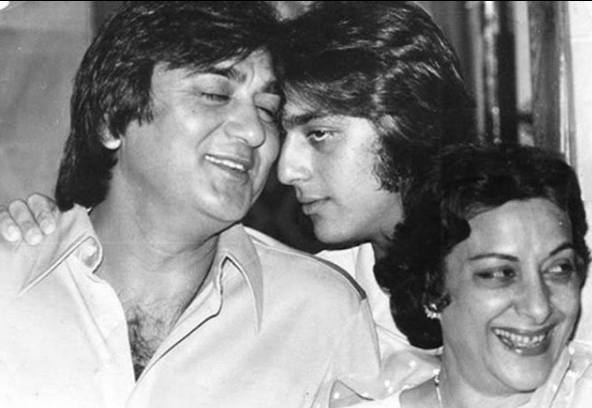 Talking about Sanju's battle with cancer, his wife, Manyata Dutt had released a statement regarding the same which could be read as "To all of Sanju’s fans and well-wishers, I can’t begin to thank you for the love and warmth you have shown him all these years. Sanju has been through many ups and downs in his life, but what has kept him going through every tough phase has always been your adulation and support. And for this, we will always be grateful. We are now being tested through yet another challenge, and I know, the same love and warmth will see him through this time as well.” 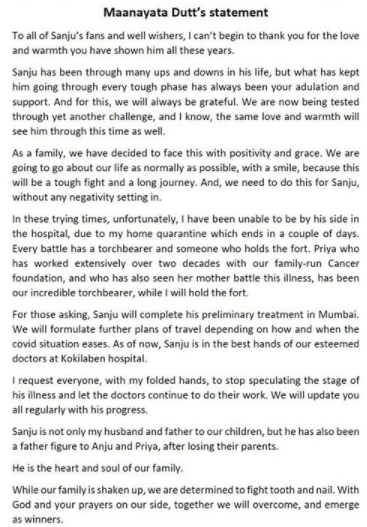 She had further talked about Sanju’s preliminary treatment and had requested everyone not to speculate the stage of his illness. Her note could be further read as “For those asking, Sanju will complete his preliminary treatment in Mumbai. We will formulate further plans of travel depending on how and when the covid situation eases. As of now, Sanju is in the best hands of our esteemed doctors at Kokilaben hospital. I request everyone, with my folded hands, to stop speculating the stage of his illness and let the doctors continue to do their work. We will update you all regularly with his progress.” (Don't Miss: When Maanayata Dutt Was Asked About Taking Over Sanjay Dutt's Life And Rejection By His Sisters)

Have you also received thrashing from your father like this? Let us know!

Maanayata Dutt Returns To Dubai Leaving Husband, Sanjay Dutt At Hospital With Family For This Reason

Newlywed Aishwarya Sharma Gets Surprise From Hubby, Neil Bhatt On Her First Birthday After Marriage