“Imagine Saif Ali Khan and Amrita Singh have a kid. They’re both weird. We’re all weird.” – Opinionated, sassy and unapologetic Sara Ali Khan grabbed major fan-following with her first appearance on the celebrity chat show, Koffee With Karan season 6, with her abba, Saif. With the charismatic charm and engaging attitude, Sara seemed like a fresh breath of air and the fun-filled dynamics between two generations was a delight to watch. Sara, in more ways than one, is a spitting image of her now divorced parents, Saif and Amrita. (Also Read: Unseen Childhood Pic Of Sara Ali Khan Helping Abba Saif Ali Khan Shave, His Reaction Is Priceless)

Sara Ali Khan had admitted on the show, “Of course I’m weird. When you decided to have a kid, you all would know right... the genes kind of mix.” Recently, the makers of Koffee With Karan released an Unseen Koffee Konfessions episode which is a compilation ‘undekha’ rapid-fire and revelations, which made us wonder why these were removed from the original telecast as they were so interesting! 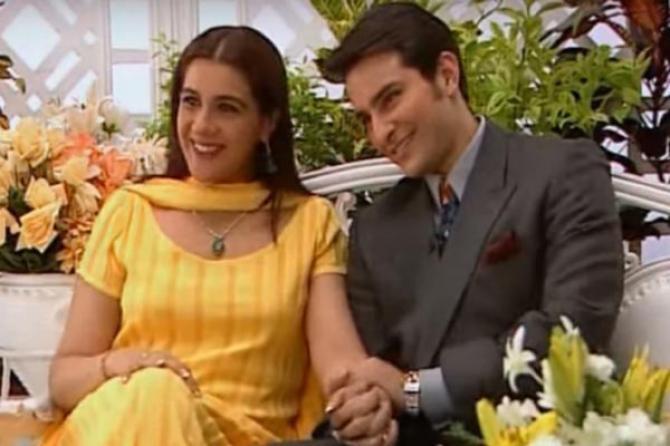 In a clip from Sara Ali Khan and Saif Ali Khan’s episode, the father-daughter duo talked about the time when they had dinner together along with Amrita Singh. Reminiscing the last time, he met his first wife, Amrita, Saif had said, "In Columbia, when we went to drop Sara to the University. We had dinner together in New York." Sara Ali Khan added, "It was nice. I was going to college and mom had come to drop me and Abba was also there. Actually, my father and I were having dinner and then we decided to call my mum, and she came. We had a good time. And then they set me up in college together, I remember. And it was actually quite a sight because you were seeing, you know, Amrita Singh, and for those of you who know her, it's a funny sight, like, making my bed and Saif Ali Khan putting the bulb in the lamp. It was really nice and I really cherish that." 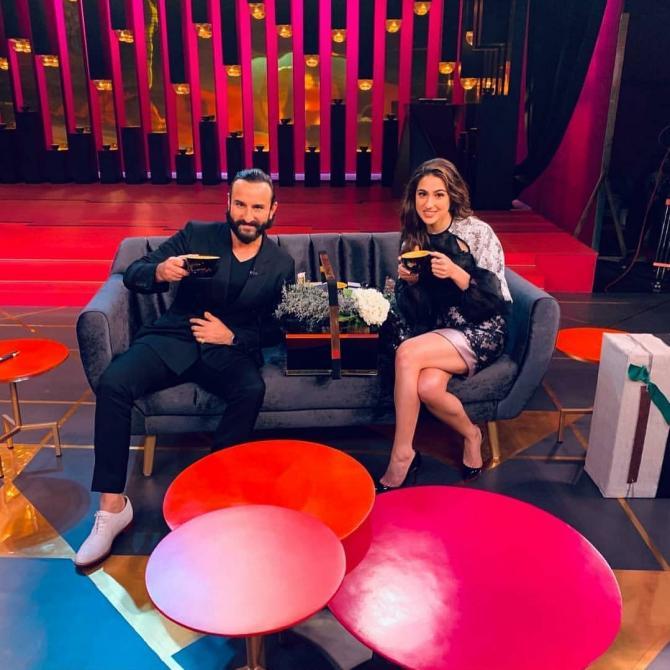 In an interview sometime back, Saif Ali Khan shared that he has always been proud of his daughter, Sara Ali Khan and he is really happy with the way Amrita Singh brought her up. He had said, "It's entirely her achievement. I was a proud father even when she got into Columbia University and graduated in two years. I'm proud when I see her interacting with the staff at home. She's so well behaved, full credit to her mother (Amrita Singh). Sara's intelligent, well-spoken and charming."

The proud father, Saif Ali Khan, is happy that his daughter has understood the craft of acting and is doing some really good work with each of her films. He was quoted as saying, "From her performance in Kedarnath, I could see that she understands the craft. Nobody tells you this, but the camera can read your thoughts. If you fake it, it shows on screen. She liked the story and played it with her heart." (Also Read: Sara Ali Khan Reveals How She Is Responsible For Saif Ali Khan And Kareena Kapoor Khan's Marriage) Sara Ali Khan has always acknowledged the fact that her parents got divorced and it gave her and Ibrahim Ali Khan, two happy homes instead of one unhappy home. She had remarked, “They would have been very unhappy together had they stick together. They took the right decision and now, everyone's happy. I'm happy, abba is happy, mumma is happy, and Kareena is happy. I have two comfortable homes now, rather than having an uncomfortable home.”

Speaking about their modern family and how they interact with each other, Sara had stated, “Everyone has been clear about their dynamics with me. It has never been confusing. Kareena herself says that ‘look you have a mother and a great one and what I want is for us to be able to be friends.’ My father also never said ‘this is your second mother’ or made it any way uncomfortable.” Do you know, Sara was in a sheer dilemma about the name by which she will call her step-mom, Kareena? Revealing the same on Koffee With Karan, the Simmba actress had said, “I think Kareena would probably have a nervous breakdown if I was going to call her, 'Choti Ma'. She would be like, 'No!' I used to be like, 'What should I call her? Kareena, Kareena aunty' My father's like 'You don't want to call her aunty. So, you can call her 'K' or 'Kareena’.” (Also Read: Unseen Pic Of Saif Ali Khan And Kareena Kapoor Khan's Wedding With Sara Ali Khan And Ibrahim Khan)

Sara Ali Khan hanging out with her divorced parents, Saif Ali Khan and Amrita Singh, is indeed a moment to cherish for a lifetime. Don’t you think so? 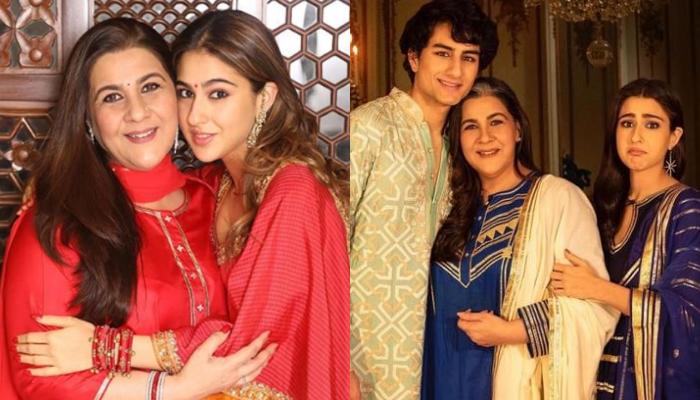 Sara Ali Khan is the most loved star kid in B-town, who won many hearts with her one-liner jokes and witty poems. Besides good looks, Sara serves major fashion goals for Gen-Z ladies. Currently, she has been making headlines for her alleged relationship with cricketer, Shubman Gill.  Sara shares a warm