Shamita Shetty is roped in for the web series, 'Black Widows' and announced the same on her IG handle. Shamita's sister, Shilpa Shetty Kundra and brother-in-law, Raj Kundra expressed their excitement.

The ones, who always encourage you to chase your dreams and never hold you back by saying you can’t do or achieve something. The ones, who treat your accomplishments like their own and proudly cheer for you. The ones, who understand the hard work you have put in to become what you’re today and celebrate your victories. They are the ones, whom you should never let go and cherish your relationship with them. For the Sharara Sharara girl of Bollywood, Shamita Shetty, it is her sister and brother-in-law, Shilpa Shetty Kundra and Raj Kundra, who are her biggest and proudest cheerleaders. (Also Read: Kajol Shares A Picture Of Her 'Closest Clan', Gives A Glimpse Of People Who Taught Her Great Values)

On February 2, 2019, for Shamita Shetty’s birthday, Shilpa Shetty Kundra and Raj Kundra along with other friends had taken a trip to Phuket, Thailand. Sharing a picture from the celebrations, Raj had written a heartfelt birthday wish for his saali, Shamita, which could be read as "Wish you nothing but the best Shamita. Thank you for being not just a fab sister but a best friend that's always tells it how it is! Hope this birthday is the beginning of many wonderful things in your life."

Shilpa Shetty Showers Raj Kundra With Kisses On His Birthday Bash, Celebrates His Day In Style In June 2020, IANS had announced that Scandinavian producers, Roope Lehtinen and Mikko Polla's crime drama, Black Widows is getting an Indian adaptation, as a web series on Zee5. Shamita Shetty is roped in for the web series along with Mona Singh, Swastika Mukherjee, Sharad Kelkar, Raima Sen, Parambrata Chattopadhyay and Aamir Ali. Shamita had announced the same on her IG handle and had captioned her post as “Super excited to announce my new web series Black Widows on @zee5premium Disclaimer: Not a super-hero movie, sorry Marvel fans! But do stay tuned for the Indian adaptation of the famous Finnish Drama #blackwidows #comingsoon @zee5premium #BlackWidowsOnZEE5.”

Shamita Shetty’s sister, Shilpa Shetty Kundra couldn’t control her excitement and commented on her post, “Yaaaaaayyyyyy!!!!! Can’t wait yo see it.” Shamita’s mother, Sunanda Shetty wrote, “Congrats my darling & loads of blessings filled with love peace joy n lotsa success!! @Shamitashetty_official @theshilpashetty.” Shamita’s brother-in-law and Shilpa’s husband, Raj Kundra took to his IG handle and posted a proud note for his sister-in-law. Raj captioned the post as “Super excited and proud of you @shamitashetty_official I know you will rock it!! Black Widows on @zee5premium.” (Also Read: Happy Birthday Pankaj Tripathi: Unseen Picture Of The Actor With His Wife Mridula From Their Wedding) 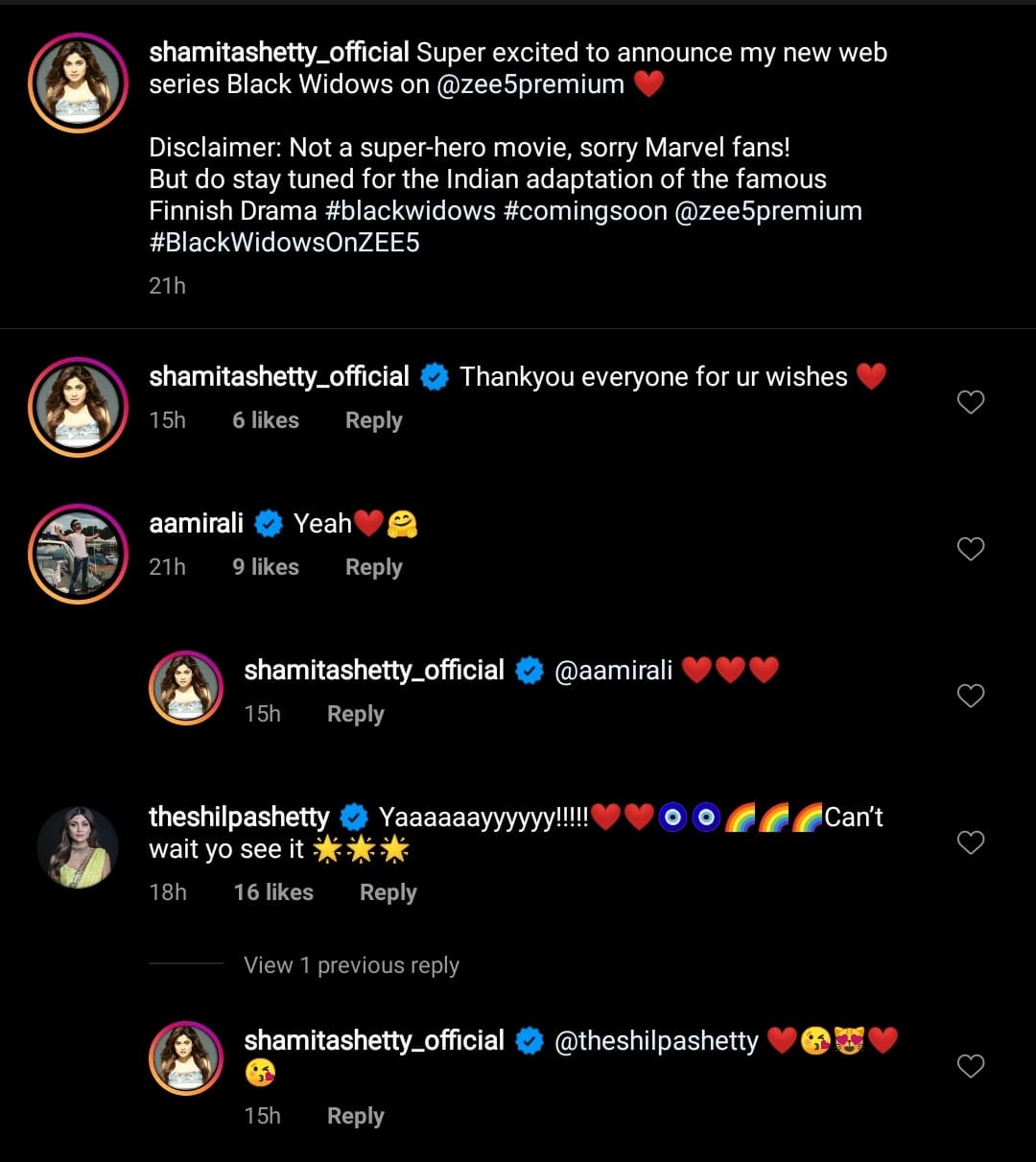 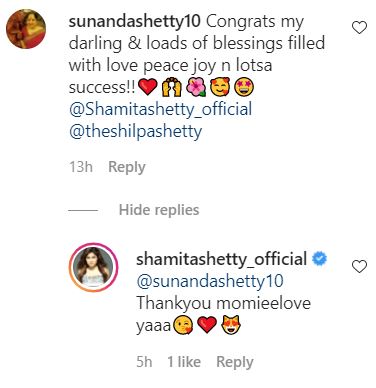 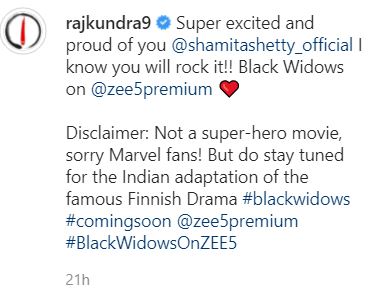 Last year in February, Shamita Shetty was trolled by netizens for mistreating a fan. In a post where Shamita had clarified the situation, Shilpa Shetty Kundra had stood by her sister’s side. She had written, “Judgments are a confession of ones own character. @shamitashetty_official do your karma, this is part and parcel of our life… lots of pros a few cons” followed by heart and kiss emojis. And her brother-in-law, Raj Kundra had written, “Don’t explain and don’t complain best philosophy haters will hate, that’s their job! Keep rocking” followed by kiss emojis. A lot of celebs have emphasised on the seriousness of mental health including Shamita Shetty, who had penned her battle with depression, urging everyone to find their inner strength, channelise it and confront it head-on to win the fight with mental health. Shamita had penned a long note on her battle with depression and had described the effects of mental illness in the most visceral manner. Speaking about her experience, Shamita had written, "I know the pain because I've been through it. It took me a while to recognise and accept it, to muster up courage, look it right in the eyes and say I'm stronger than you and I will beat you!" Shamita had captioned her long note as "Peace, Positivity and Love to all", followed by a heart emoji. Her sister, Shilpa Shetty Kundra had commented on her post, "My brave warrior @shamitashetty_official, my heart swells with pride with your strength and courage. Love you." (Also Read: Unseen Picture Of Baby Zain Kapoor Cradled In Mommy, Mira Rajput Kapoor's Arms Exudes 'Maa Ka Pyaar') We can’t wait to see Shamita in the Indian adaptation of Black Widows! 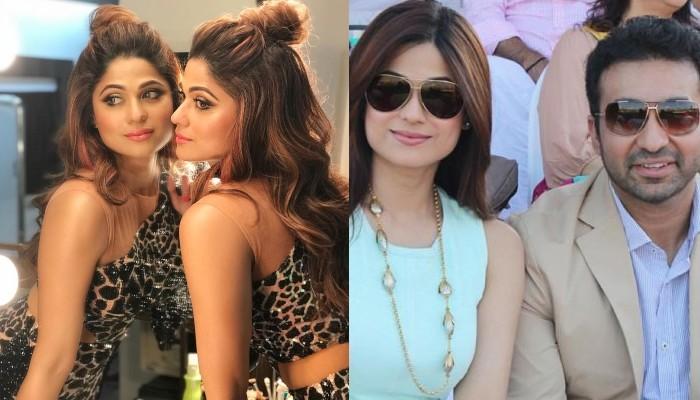 July 19, 2021, had brought a storm in the life of the Shetty-Kundra family as Shilpa Shetty Kundra's husband, Raj Kundra, was arrested in the night due to his alleged involvement in the production of adult movies and publishing them through a mobile application. Since then, the business tycoon, his actress-wife,