Bollywood actress, Shilpa Shetty Kundra revealed how she manages her kids, Samisha and Viaan along with her hectic work schedule. Find out!

Everyone is aware of the fact that parenthood is an emotional and a roller-coaster ride that involves a lot of ups and downs. One such doting parents from the entertainment industry are Shilpa Shetty Kundra and Raj Kundra. On November 22, 2009, Raj and Shilpa had become each other's forever and had embarked on their journey of 'happily ever after'. Shilpa and Raj have blissfully shaped their 'happily married life' and were blessed with a baby boy, Viaan in 2012 and on February 15, 2020, baby girl, Samisha had completed their family. (Recommended Read: Kapil Sharma's Wife, Ginni Chatrath Twinned With Anayra Sharma For Baby Shower, Bharti Posts Picture)

Since then, Shilpa Shetty Kundra is giving us major mommy goals and all the innovative ideas in the world to keep a healthy bond with your kids. Now during her recent catch-up with her beloved fans on Instagram, she revealed the secret of how she manages her kids, Samisha and Viaan along with her hectic work schedule. Scroll down to know it all!

Shilpa Shetty Gives A Tour Of House Made By Her Son, Viaan Raj Kundra As He Explains Every Section On February 1, 2021, Shilpa Shetty Kundra took to her Instagram handle and started an 'Ask Me Anything' session with her millions of fans after a long time. The actress can be seen answering questions while travelling to her project's sets and getting ready for her shoot. While some of her fans asked how she looks happy all the time, some asked her to reveal her favourite destination. Some requested her to reveal the secrets of her stunning hair. However, there was a particular question that won everyone's hearts, as it once again made us realise that no one in this world will love you more than your mother. One user asked Shilpa, "How do you handle your baby and son with work?" To which, the doting mother and talented actress revealed her life's one mantra that she follows to her heart. Revealing the same, she said, "My babies are my first priority; everything else comes later." Take a look: 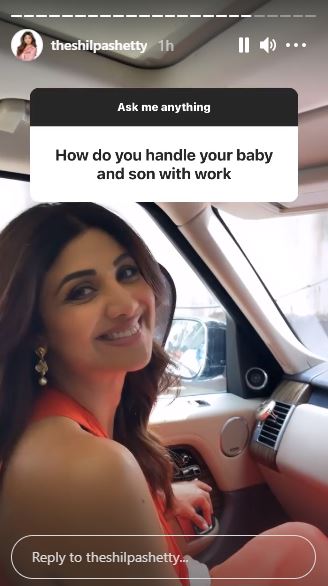 There's no denying to the fact that Shilpa Shetty Kundra is a hands-on mommy and a terrific performer and artist. Time and again, we have seen her sharing snippets from her playtime with her kids, Viaan Raj Kundra and Samisha Shetty Kundra on her IG handle. For instance, On June 09, 2020, Shilpa had taken to her IG handle and had posted a video tutorial of 'DIY Mojito Salt Scrub' which she had made with her son, Viaan. The mother-son duo had looked adorable in the video, as Viaan had followed his mother's instructions quite obediently. Along with the video, Shilpa had penned a long caption, and it could be read as "Making a DIY Salt Scrub with Viaan. This is for all those bored children and Moms who need innovative ideas to keeps their kids occupied (I know that feeling) It works better when there is a creative and useful end result." (Don't Miss: Ekta Kapoor Wishes Her Mommy, Shobha Kapoor On Her Birthday, Asks Her Why Is She So Bossy)

The ever-so-gorgeous, Shilpa Shetty Kundra is also quite famous among the netizens for her long notes in her Instagram posts' caption describing her emotions on different occasions or moments. For instance, on Mother's Day, Shilpa Shetty had taken to her Instagram handle and had shared a video with her son, Viaan Raj Kundra and daughter, Samisha Shetty Kundra with a clip of her son's letter, which she had received as a gift on Mother's Day. Alongside it, she had written a heart-melting caption that could be read as "Making the decision to have a child - it is momentous. It is to decide forever to have your heart go walking around outside your body." - Elizabeth Stone. To the two halves of my heart Viaan & Samisha: You both complete me. I love you! Thank you for choosing me. Happy Mother's Day... to me and to all those amazing mothers out there." Take a look. (Also Read: Priyanka Chopra Feels No Need To Include Parts Of Her Life That Don't Matter Anymore, In Her Book)

Did you like Shilpa's way of balancing her kids and work? Let us know! 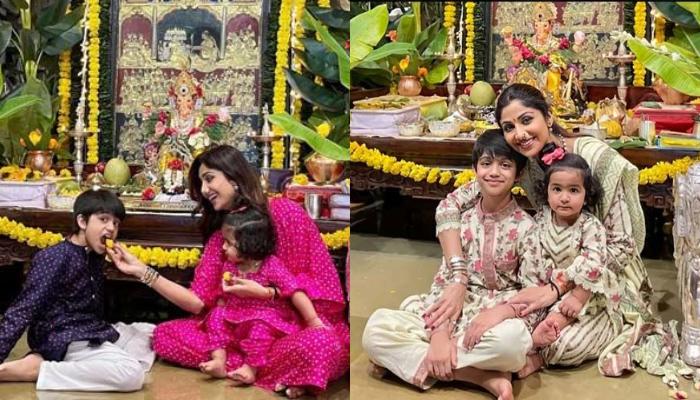 Shilpa Shetty Kundra and Raj Kundra had embraced parenthood with their first child, Viaan Raj Kundra, in 2012. For the unversed, the couple had welcomed their little angel, Samisha Shetty Kundra, into their lives in 2020 via surrogacy. In February 2021, Shilpa Shetty celebrated her daughter, Samisha's first birthday by sharing