Akash Ambani and Shloka Mehta got married in March 2019 in the presence of their friends and families. Ever since then, eyes are on them and recently, Shloka's heels grabbed the attention.

Royalty, magnificence, luxury and class to name a few are some adjectives that define this family the best. Ambanis are the ones who we are talking about! Naam to suna hi hoga and why not, in fact, many of us wish to be born in this wealthy (inside out) family in our next life (if at all the concept of saat janam exists). Mukesh Ambani and Nita Ambani have been spreading their charm all this while and the legacy is now taken over by their kids, Akash Ambani, Isha Ambani and Anant Ambani.

In fact, two out of Ambani anshs, Akash and Isha are officially taken by Shloka Mehta and Anand Piramal, respectively. While Isha had tied the knot with Anand in December 2018, Akash became mister to Shloka in March 2019. Both the weddings were magnificent and larger than life, which is why they trended on social media like crazy. And it was totally worth it! Ever since both the couples have gotten married, their fans are keeping a hawk’s eye on them. (You May Also Like: Jay Bhanushali Is Learning Something Unique For His And Mahhi Vij's First Baby, Details Inside)

Isha Ambani's Entry Towards Her Wedding 'Mandap' With Her Brothers, Holds Both Of Her 'Bhabis' Hands Recently, on June 29, 2019, the newlyweds, Akash Ambani and Shloka Mehta were spotted together as they entered hand-in-hand at cricketer, Yuvraj Singh’s retirement bash. The newly-wedded couple looked every bit of royal as they happily posed for the paps. Dresses in a white off-shoulder top and sky-blue pleated skirt along with a pair of delicate diamond earrings and a white band studded watch, Shloka had looked stunning from top to bottom. But what grabbed everyone’s attention was her Sophia Webster butterfly heels. Crafted with the signature embroidered butterfly wings and tan leather soles, the sandals had a rose gold-tone hardware and a slender stiletto heel. Her super-stunning, chic and modish footwear stole everyone’s heart. Take a look at Shloka’s complete look and a closer look at her heels right here: 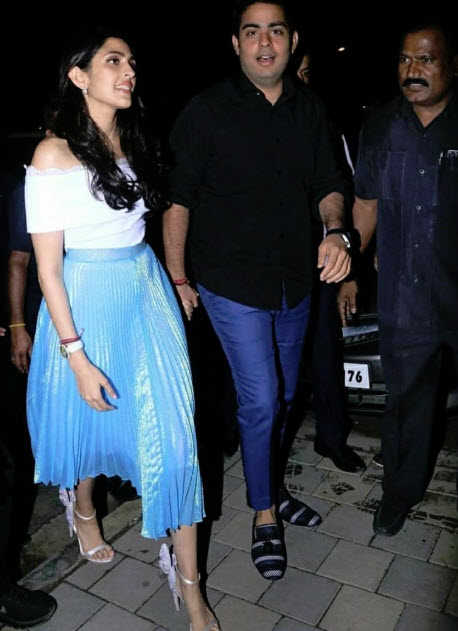 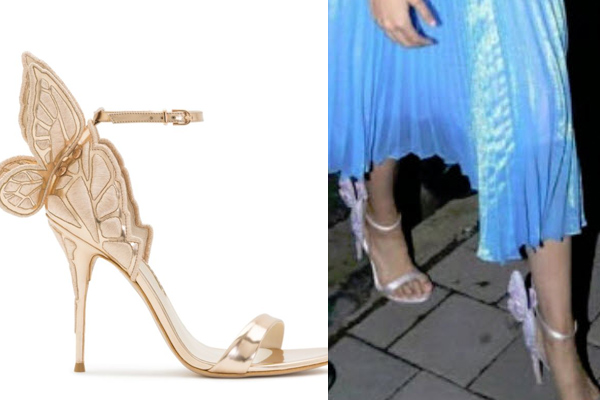 Ambanis have always impressed us with their impeccable fashion sense and on-point styling. So much so, that a few days back Nita Ambani’s picture with her handbag had gone viral, courtesy the royalty it displayed. Following is the picture that went viral on social media wherein Nita ji can be seen aww-ing us all carrying a rare Hermes' handbag, made up of Himalaya Crocodile Skin. For the ones who don’t know, it is one of the most popular as well as expensive handbags that is common amongst the celebs. Also, as per a report by The Economic Times, this bag is laced with gold and diamonds and in a 2018 auction, it was sold at USD 300,322. (Do Read: Nita Ambani Is The Most Loving Mother-In-Law To Shloka Mehta And Anand Piramal, Here Are The Proofs) 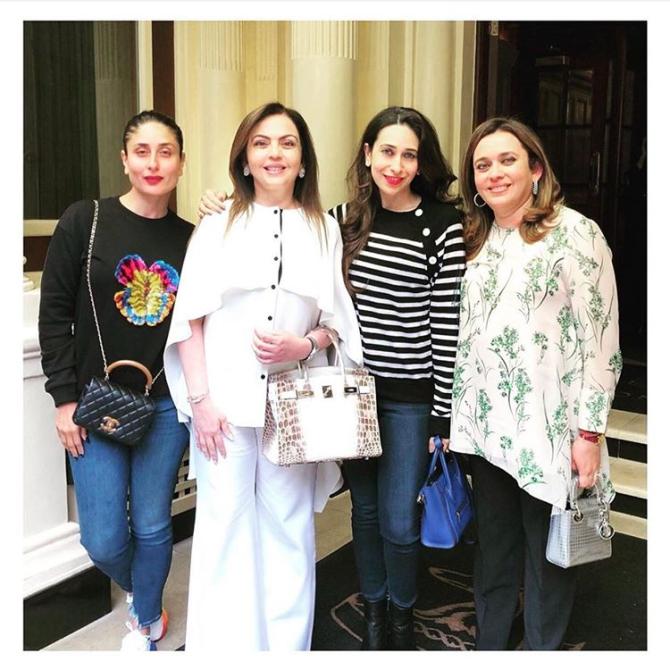 Coming back to Shloka Mehta, for the ones who don’t know, Shloka is the daughter of diamantaire Russell Mehta, who is one of the prominent businessmen. But Shloka never had any interest in business and on similar lines, she had once shared, "I’ve never had an interest in the business. I think the diamond industry is not very friendly to women. It’s changing but most women typically become jewellery designers, or they work in human resources. Those kinds of roles. I don’t think that I have the creative aesthetic sense to be a designer." 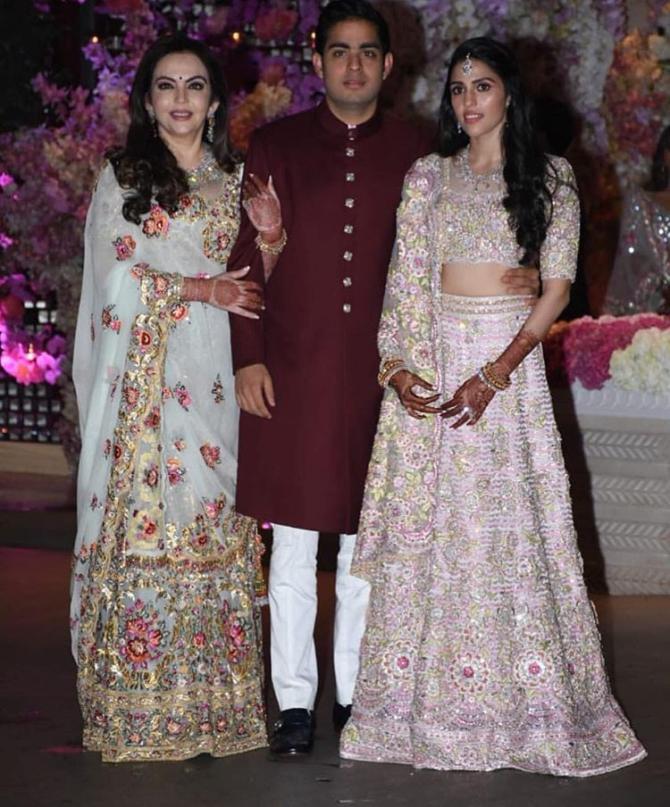 She had further gone on to talk about working for social welfare, and had stated, "From my experience, I had recognised that funding is a huge limitation and often your role in an NGO can be chasing grants. I wanted to be on the other side, giving grants, understand what things a Grantmaker looks at, and how they decide which NGO to give." (Do Check: Unseen Picture Of Radhika Merchant Looking Like A Doll In Classy Lehenga Proves She Is A Diva) For the ones who have come in late, on Akash and Shloka’s engagement, Nita ji had given the couple her blessings in the form of poetry she had written for them. The poem can be read as, "They went to Kindergarten to learn ABC, Not knowing — que sera sera — What their future would be…Gummy bears and jujubes, Sparkle pops and jellybeans. Sweetened their lives, From childhood through teens! Till glasses of milk made way for cups of tea… And the Sky fell in love with sweet Chants of glee! From ponytails and Barbies. From pranks and football… The years just blended… And, today they stand tall – With their eyes full of love With one single plea… Their hearts beat in rhythm Singing, “Will you marry me?” Today we bless them, and today we pray: All through their lives, on each golden day, May they always be there holding hands side by side May Gods shower their blessings on this groom and his bride!"

What do you guys have to say about Shloka’s stunning pair of butterfly heels? Do let us know in the comments section below! 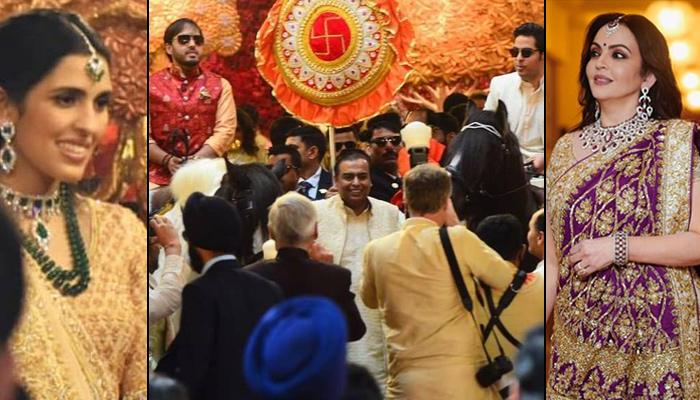 With the larger-than-life pre-wedding festivities in Udaipur attended by most prominent names in entertainment, cricket and business arenas across the world, Isha Ambani and Anand Piramal’s wedding can be billed as the most expensive wedding in the nation. Isha and Anand will tie the knot on December 12, 2018, at