The internet is buzzing with the news of business giant, Mukesh Ambani, and philanthropist, Neeta Ambani’s son, Akash Ambani’s engagement. The junior Ambani got engaged to Shloka Mehta in Goa on March 24, 2018, in an intimate ceremony. It is an arranged marriage setup, where the two families met first to decide the proceedings. The members of both Ambani and Mehta family and a few close friends were present at their engagement ceremony that took place in a five-star resort in Goa.

According to the sources, before exchanging the rings, Akash went down on his knees to propose to Shloka. In a few pictures from the ceremony, the big rock on Shloka’s finger is grabbing eyeballs. (Also Read: Dhirubhai Ambani's Grandaughter, Married In The Jewellers' Family, Wore A 'Chooda' Made Of Diamonds)

Food Was Served To Guests Through Floating Air Balloons At Akash And Shloka's Engagement, See Video As it was a small ceremony, the entire Ambani and Mehta family was dressed-up very casually for the day engagement. Mukesh, Neeta and Kokilaben Ambani, all were seen wearing light-weight and flowy fabrics. While Akash wore a nautical line T-shirt and white pants, along with a blue blazer, his better-half, Shloka chose a rather unusual gown, which wasn’t too blingy or OTT. 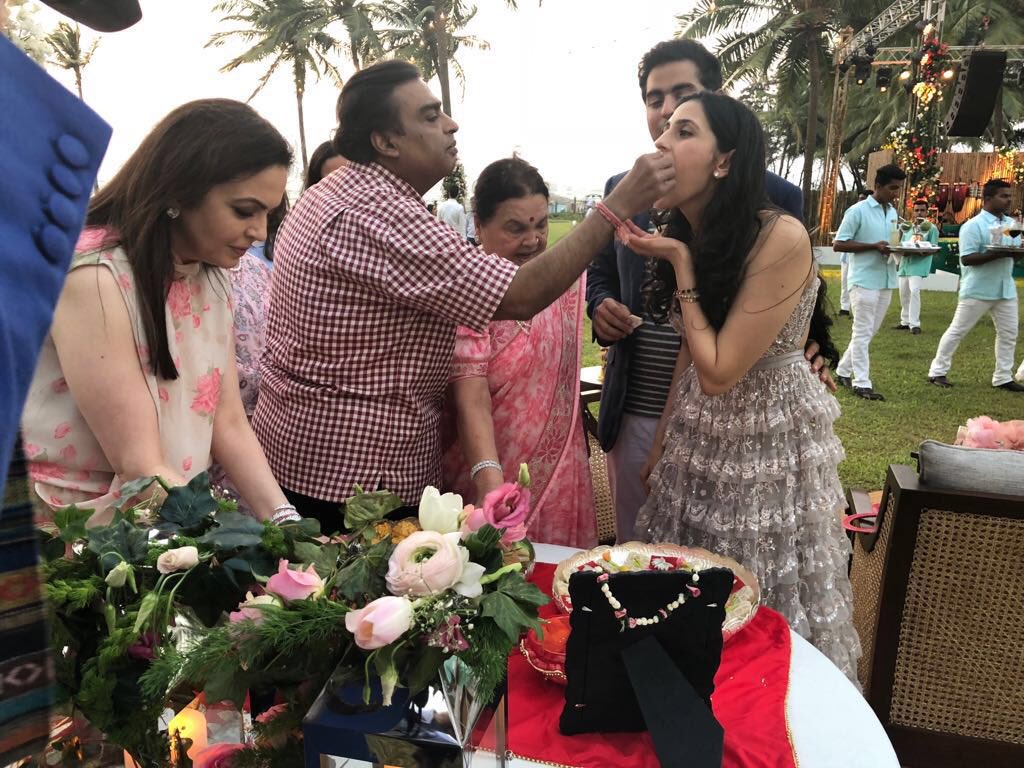 It caught many netizens’ attention and some even noticed that it is the same gown that Alia Bhatt wore in Black colour for IFFI Awards that too took place in Goa. The chic gown is from a London-based designer website, Needle And Thread. It is from their bridal autumn/winter 2017 collection. This stunning piece has been named ‘Marie Gown’ and the one Shloka is wearing is in dove grey colour. The antique lace dress is delicately embroidered, and it has ruffled frills in the lower half. (Take A Look At 13 Stunning Looks Of Bollywood Actresses At Their Sangeet Ceremony) Well, you must be thinking that it might a very expensive dress as soon-to-be Ambani bahu is wearing it for her engagement ceremony! Sorry to disappoint you all, but it is quite an affordable dress. We had never thought that a millionaire’s beti and bahu will be wearing such an affordable dress on her engagement ceremony. Unlike other rich kids, who usually prefer big brands with heavy price tags, she chose a rather subtle dress for herself that cost her only £875 (Rs 80,500 approximately). Not that expensive, right? The dress was contemporary, delicate and perfect for the Goa weather. Also, she paired her classy gown with minimal jewellery and makeup. (Also Checkout: Kriti Sanon And Vaani Kapoor Wore The Exactly Same Oufit At Virat-Anushka's Reception) While we all know who Akash Ambani is, many people are curious to know about Shloka Mehta. Well, Shloka is the youngest daughter of Diamantaire, Russell Mehta who is the owner of Rosy Blue empire. In 2014, Shloka joined her family business as the Director at the Rosy Blue Foundation, the philanthropic arm of their diamond manufacturing company. She is also the co-founder of ConnectFor, an app which matches volunteers with the NGOs. The young lady’s net worth is estimated to be USD 18 million, which is approximately 120 crore. Even though many expected the millionaire lady to splurge on something completely unaffordable, she chose to keep it simple and looked nothing but gorgeous. Our heartiest congratulations to the newly-engaged couple, Akash and Shloka.

Food Was Served To Guests Through Floating Air Balloons At Akash And Shloka's Engagement, See Video