After a long while, the Bachchan family, finally has good days in their lives, and their happiness is evident from the fun banter between Shweta Bachchan Nanda and her son, Agastya Nanda. Check out!

The bond between every mamu and bhatija is more of friends because they hold on to each other’s secrets and have some fun memories together. From giving career advice to love advice, the relationship between mama-bhatija is the most sort after relationship. In the wake of Coronavirus, the past few days have been extremely stressful for the Bachchan family, as Amitabh Bachchan, Abhishek Bachchan, Aishwarya Rai Bachchan and Aaradhya Bachchan had tested COVID-19 positive. After a long while, the family finally has good days in their lives. (Also Read: Smriti Khanna's Daughter, Anayka Looks Alike A Cute Colour Palette In This Adorable Video)

After staying in the hospital for 10 days, Aishwarya Rai Bachchan and Aaradhya Bachchan were discharged on July 27, 2020, after being tested negative. After staying in the hospital for 23 days, on August 2, 2020, Amitabh Bachchan too had recovered from the virus and was discharged to be in the quarantine at his home in Jalsa. After spending 29 days in hospital, Junior Bachchan, Abhishek had also been discharged and his bhatija is as elated about the news as his sister, Shweta. Taking to his IG handle, Abhishek had announced about the news of getting discharged.

Abhishek Bachchan Goes Out On A Family Dinner On Birthday With Aishwarya, Aaradhya, Amitabh, Shweta 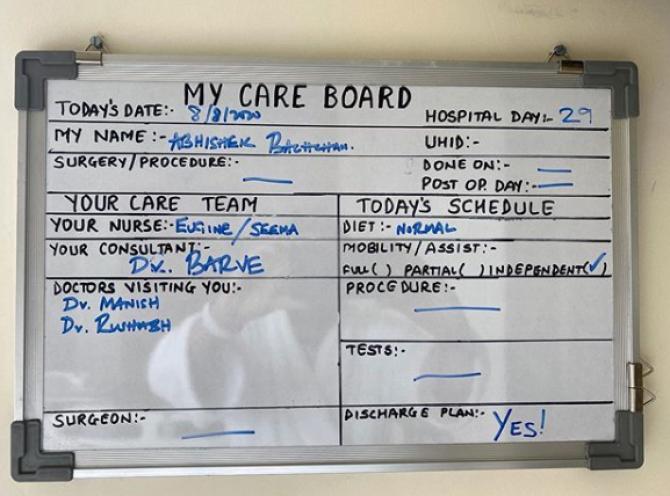 Now as he has returned home, his sister, Shweta Bachchan Nanda can't keep calm and her happiness knows no bounds. She had treated her fans with an unseen childhood picture of Abhishek, which she had posted on her IG handle with an array of heart emojis. Abhishek had looked utterly cute in his childhood picture riding a toy tractor. However, it is mother-son banter over the post that has caught our attention. As mamu, Abhishek can be seen riding a tractor in the picture posted by his sister, Shweta, and her son, Agastya made a comment related to mamu’s movie, Dhoom to welcome him home. His comment can be read as “Dhoom Dhoom”, to which his mother, savagely replied as “a little bit of originality please.” Abhishek too commented on the post as “Love you”. Take a look: 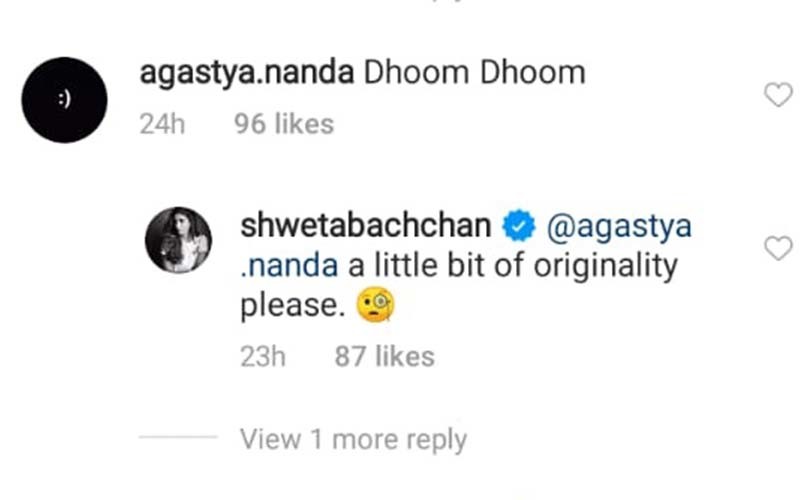 During all the days spent by Abhishek in isolation ward, fighting the vicious virus, his sister, Shweta had acted as an emotional anchor for him. On August 4, 2020, Abhishek Bachchan had taken to his IG handle and had shared a view from his isolation room in the hospital. Along with the picture, he had channelled his positive attitude and had written, “The colours of nature never fail to impress." While his fans and well-wishers had commented for his speedy recovery, his sister, Shweta Nanda Bachchan had encouraged him and had written, “You. Hang in there.” 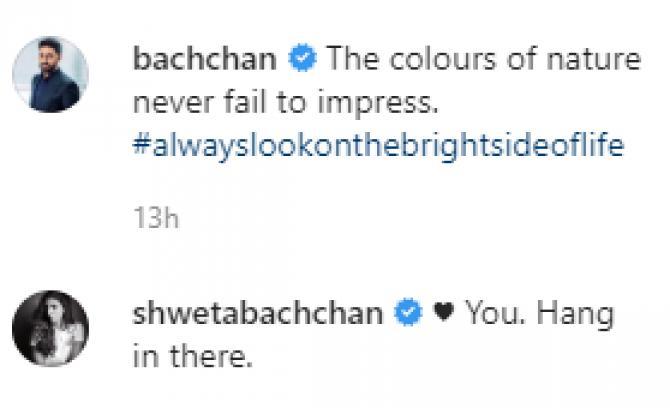 On his 26th day at the hospital, Abhishek Bachchan had shared a picture of his 'care board' on his IG handle, depicting the actor’s health chart and how there was no plan to discharge him anytime soon. Along with the picture, Abhishek had written, “Hospital day :26 Discharge plan: NO! Come on Bachchan, you can do it!! #believe.” His sister, Shweta Bachchan Nanda, who had been a constant motivation in his life had commented, “Hang in there!!! Yes you can do it” followed by a heart emoticon. (Recommended Read: Sunny Leone Plays A Hilarious Prank On Her Sleeping Hubby, Daniel Weber, Calls Him A Good Husband)

On July 31, 2020, Abhishek had shared a picture of the isolation ward of the Nanavati hospital during his late-night walks. He had taken to his IG handle and had posted a picture of the hospital corridor and had written, "Light at the end of the tunnel! #latenightwalks." His sister, Shweta Bachchan Nanda had showed her support and had commented, "Soon" on his post. 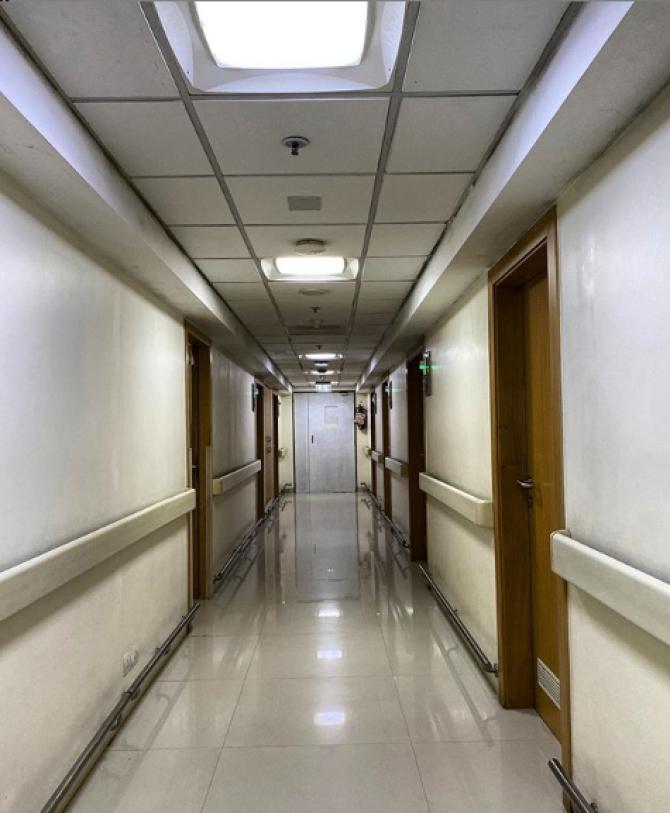 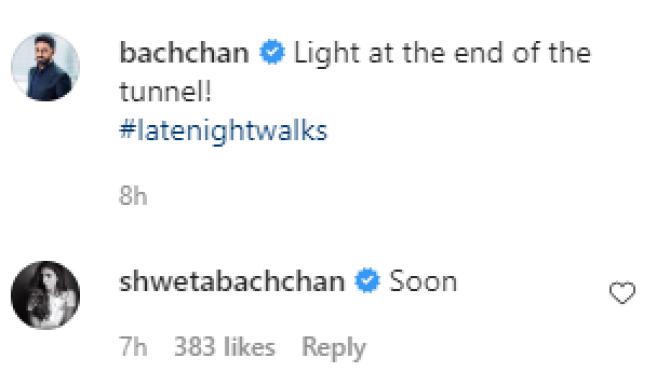 Abhishek Bachchan shares a great bond with his nephew, Agastya and on his birthday in 2019, his mamu jaan had shared a lovely birthday wish for him. Abhishek had taken to his Instagram handle and had shared a candid picture of himself with Agastya and had written, "Happy 19th Birthday Agastya. Love you." (Recommended Read: Kamya Panjabi And Shalabh Dang's Adorable Notes On Their Six-Month Anniversary Is Pure Couple Goals) We are in love with the bond of Shweta, Abhishek and Agastya! 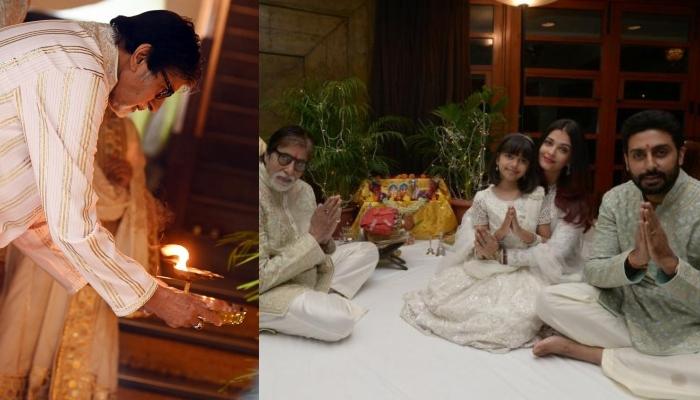 Bollywood and parties go hand-in-hand! And if the occasion is as grand as Diwali, we can surely expect some big parties. The Bachchan family of Bollywood is quite famous for their extravagant Diwali parties. With celebrities dressed in their best to the late-night card parties and lots of glamour and décor,